Millions have read Kathryn Stockett’s bestselling novel The Help with a mixture of fascination and raw, often tearful, emotion.
Based on the lives of black servants in America’s Southern states of the Sixties, it is a sharply observed portrait of a racially charged, segregationist world that some might say has barely passed.
It has also proved a literary phenomenon, selling five million copies worldwide, 500,000 of them in Britain.
And next month Disney’s film version will open here.

When Abilene Cooper picked up her copy, however, her reaction was rather different. Instead of sympathy for the characters of The Help, there was anger and devastation.
As she turned the pages she came to believe that the story at the heart of the book – an unlikely friendship between a white girl and a black maid – was her own. Her life, she believes, has been stolen, without acknowledgment or payment.
Certainly the name is hers, although in the book the heroine is spelt Aibileen. The city, Jackson, Mississippi, is correct, and like the characters in The Help, she has spent much of her life working in white households.

Identity theft: Author Kathryn Stockett is being sued by Abilene Cooper (above) who claims she used her life to write her bestseller


Intriguingly, these include the household of Kathryn Stockett’s brother and sister-in-law, where she has been a maid and nanny for 12 years.
Abilene says: ‘When I started to read the book, I said, ‘‘This is the closest thing to my life I ever seen. It’s gotta be me.’’

‘Kathryn spelt my name wrong, but they pronounce it exactly the same way in the book and the film. I introduced myself to Kathryn when I first met her at her brother’s house that way: ‘‘Aib-e-leen”.
Kathryn has Aibileen teaching the white folks’ baby girl to call her ‘‘Aib-ee”. That’s what I taught Kathryn’s niece and nephew to call me because they couldn’t manage Abilene.

‘I think she is just a racist. She claims she respects black people but she just ran all over me.’

‘I just cried and cried after I read the first few pages. In the book, Aibileen has taken her job five months after her son is killed in an accident. My son, Willie, had leukaemia and died when he was 18, in July 1998, three months before I went to work for the Stocketts.
‘I felt the emotions in my heart all over again. Kathryn copied parts of my life and used them without even asking me.’
In the book, Aibileen is a deeply religious woman who sports a gold tooth and a gold cross, as does the real-life Abilene.
Both women cope with the stifling heat of the Mississippi summer by wearing wigs when their own hair goes limp in the humid air.
Both devote a lifetime to bringing up the babies of ‘white folks’: the fictional Aibileen has raised 17 children while Abilene estimates her total to be 18 or 19.
The novel is set in the early Sixties and Aibileen hears that black civil rights leader Medgar Evers has been assassinated by the Ku Klux Klan in her home town, Jackson. The heroine is dizzy with fear and the passage has an eerie similarity to Abilene’s own memories of the murder. 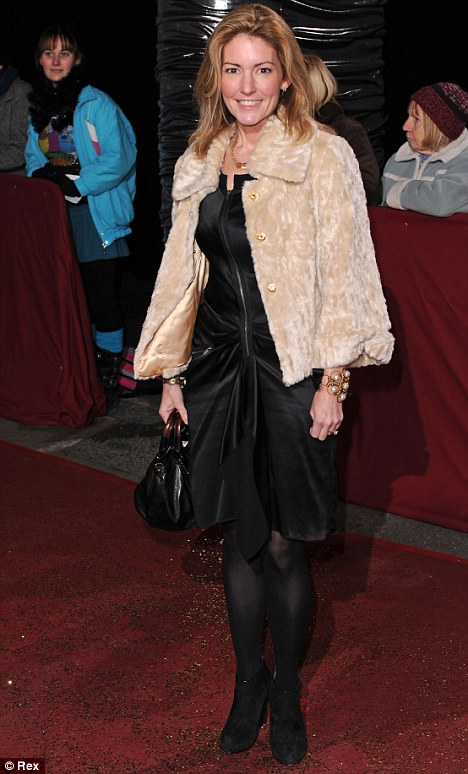 She, too, remembers how Evers’s death brought the city to the brink of civil war. When Abilene, then 12, heard the news from her grandmother that day in 1963, she was terrified: ‘My grandmomma September 4, 2011 From Sharon Churcher in Jackson, Mississippi told us all we had to protect us was God and prayer,’ she says. ‘There weren’t no coloured policemen.’
The killing was one of the most significant moments in the long, hard battle for civil rights in the Deep South.
A careworn, heavyset woman who has been working as a maid for white families in Jackson since she was 13, Abilene says: ‘My brothers were involved in the civil rights protests and my daddy feared for our lives and my momma walked around praying.
The Help compares Aibileen’s skin colour to a cockroach: ‘He black,’ Abilene says of the insect, ‘blacker than me. How can Kathryn live with herself after writing that? How can a person be that cruel?
‘I think she is just a racist. She claims she respects black people but she just ran all over me.’
These are strong, emotive words in the Deep South, where the wounds of segregation are slow to heal. Abilene has filed a writ at the Jackson courthouse, alleging Stockett used her name and story without permission.
There’s nothing unusual about such compensation claims in America, but what makes Abilene’s writ different is that she is claiming just £50,000 in damages, hardly a fortune when set against the millions the author will earn from the book and the movie deal.
Abilene’s lawyer, Edward Sanders, says: ‘It’s not about money for Abilene. It’s about hypocrisy. The Help’s big appeal is to white people. It makes them feel good because it’s about a white woman who reaches across the racial divide to help poor black servants.
Well, let me tell you, it hasn’t done anything to help Abilene. She feels Stockett is just one more white woman who has exploited an African-American.’ 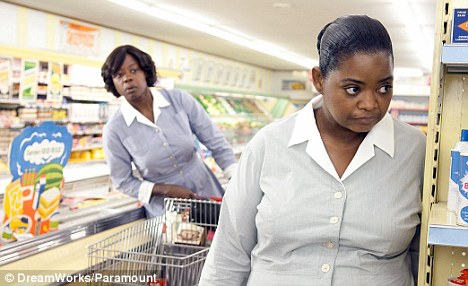 The Help: In Jackson, Mississippi in 1963, Aibileen Clark (Viola Davis, left) and Minny Jackson (Octavia Spencer) take a risk that could have profound consequences for them both

The sensitivities about race in Mississippi cannot be over-estimated even today. In June this year, a 49-year-old black man, James Anderson, was run over and killed by white youths who had set out to attack a ‘n*****’ in Jackson.
Even the cover of The Help defers to the delicacy of race issues. In Britain, the cover of the latest edition shows two black maids with two white girls. In America, it shows three birds sitting on a branch.

Born in 1951, Abilene grew up in what to this day is the poverty-stricken ‘black side’ of the city, where the children attend shabby looking state schools while their white counterparts go to private ‘segregation academies’.
She lived in the same atmosphere of terror, struggled to make ends meet and was subjected to the same degradations that made The Help such a successful book. ‘It hasn’t changed a lot,’ she says.
‘My dad worked for the stockyards and the owner gave us a little white house. There were eight of us kids. I was the knee baby and we slept two or three to a bed.
‘We were real close to my grandmomma. She worked in the fields. I think she or my auntie named me Abilene. That’s how they put it on my birth certificate but spelling it was hard.
‘My momma, she could hardly write and she couldn’t read. It’s nothing to be ashamed of. It’s just how we were. One day my sister and I went up to a white lunch counter and asked to be served. They called the police and two white cops handcuffed us and patted us down. 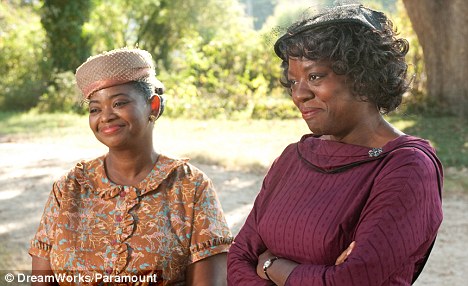 Suspicious: Abilene Cooper says when she read the book she thought the links to her life were too close

‘My two oldest brothers started participating in the freedom marches. The police beat them, you could see the blood. One of them went to jail and when he got out, he was fired from his job.

‘Another time, a lot of white people came to our house with bats and sticks. Me and my momma and my dad were downtown and when we came back, they’d poisoned our two dogs and put them in my parents’ bed. They treated us like animals, just like it says in the book.’

The fictional Aibileen is in her 50s when the book opens in 1962. The real Abilene started work just a few years later, for an employer with the same obsession with ‘coloured germs’ that led the fictional Aibileen’s boss to build a lavatory in her carport for the help.
Abilene says: ‘My mother was maid for a lady who had little-bitty kids and I went to help her babysit and clean and cook. We ate on the back porch. You had to have your own fork, spoon, plate and cup. Just like in the book, there was a half-bathroom at the back for the coloured help.’

So how could Kathryn Stockett have known about Abilene’s story? The 42-year-old author has said she started to write The Help in New York, but Abilene does not claim she told the author her life story.
The fact that she was working for Stockett’s brother Robert and his wife Carroll may be how the writer learnt the details. Abilene says: ‘I met Kathryn on two occasions.
The first time she came to stay the night. She said, “I’m Rob’s baby sister,’’ and I said, “I’m Abilene.” ‘The second time she was married and she came with her husband and daughter. I never told her about myself. She was quiet, standoffish, but she’d watch me. I’d be dishwashing or it would be playtime with the children and she’d be just staring at me.’

Abilene says she first learned of the book when she arrived at work to find her employer in tears. ‘Carroll was crying and she says, “Miss Abilene, I’ve got something to tell you.”

Could she have told her story to Stockett’s sister-in-law, Carroll, who perhaps repeated it to the fledgling writer? ‘Carroll is a kind person,’ says Abilene. ‘I might have said, “You know, it’s a whole lot better now in Mississippi than it used to be,” and told her what it used to be like . . .’ In an interview about the book, Stockett made what seems a telling admission: ‘When I was writing this book, I never thought anyone else would read it so I didn’t get real creative with names. I just used people I knew.’
Abilene says she first learned of the book when she arrived at work to find her employer in tears. ‘Carroll was crying and she says, “Miss Abilene, I’ve got something to tell you.”
She says, “Kathryn’s wrote a book and you are the main character. Rob told her not to use your name.” ’ Then a copy of the book arrived for Abilene from the author with a note saying that while a main character is an ‘African-American child carer named Aibileen’, she bore no resemblance to the real Abilene.

Stockett contended in her note that she modelled Aibileen on a long-dead black maid called Demetrie who worked for the author’s family in Jackson: ‘The Help is purely fiction and the character was loosely inspired by my own relationship with Demetrie.’

In Stockett’s story, the white girl Skeeter persuades Aibileen and 12 fellow maids to secretly help her write a history about their lives.
When her book is accepted for publication, she gives them all the proceeds. Stockett, however, is trying to get Abilene’s complaint thrown out of court and insists she isn’t entitled to a penny.
Despite going to the trouble of sending the maid the book and the note, the author is airily dismissive of Abilene’s claim. ‘If I add it up, the number of seconds where we’ve seen each other would be maybe ten or 15,’ she says. ‘I met her twice.’

In New York, perhaps, such a response would be acceptable, but not here. It wasn’t until 1994 that Byron de la Beckwith, a Ku Klux Klan member, was jailed for the murder of Medgar Evers – 31 years later.
Black maids still raise the children of ‘white folks’ and the two communities live separate lives.
This is Mississippi. Time passes slowly, and Abilene believes she has become a victim of the same prejudices that blighted her childhood.