For months he had struggled to communicate, the power of speech fading with his life.

But hand-in-hand once more with the woman he had loved for 40 years,John Clark summoned his strength one last time.

Within 24 hours both had died peacefully. 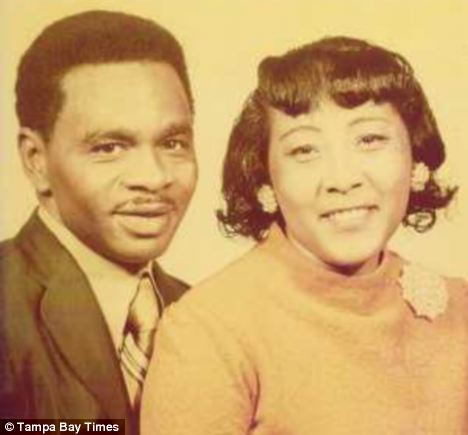 ‘I love you’: John Clark (left), who had been unable to speak for months, spoke clearly to tell wife Grace (right) his feelings as she lay in hospital. Within 24 hours they had both died peacefully

Mr Clark had been residing in an assisted living facility in Tampa, Florida. His wife Grace, 81, would visit him everyday until she suffered a heart attack in late June.

His step-son Fred Hearns, 63, told Mr Clark that his wife was sick but did not go into details until her condition deteriorated.

Then on July 22 he told his step-father that Mrs Clark was getting worse each day and then drove him to the hospital to visit his wife of more than 40 years.

After seeing his wife Mr Clark returned to the home but just four hours later was found unresponsive and taken to St Joseph’s Hospital in Tampa where he was pronounced dead.

The next morning doctors removed Mrs Clark’s ventilator and she died at noon, just 16 hours after her beloved husband.

Two months earlier Mr Clark had moved into the Amrose Care facility after his wife could no longer care for him at home but she continued to feed and care for him. 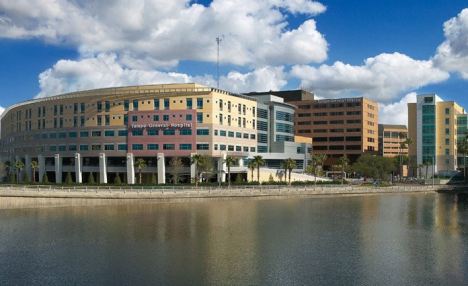 Last visit: Mr Clark spoke his final words to his wife of more than 40 years at Tampa Hospital where Mrs Clark was admitted after suffering a heart attack

She said: ‘If he really wanted to express himself he could emit words, almost whispering sounds.’

The couple married around 1970, spending many summers in the American state of Maryland where Mr Clark worked as a chef in resort hotels.

Mr Hearns, a retired director of the Tampa Department of Community Affairs said of his step-father: ‘He was the custodian, the chef, the painter and the plumber…could cook better than anybody.’

His mother, a former data processors, was a strict enforcer of rules, even locking Mr Hearns out church when he arrived moments too late as a boy.

Mr Hearns said: ‘She gave me that look that said “You know you’re late. Now just wait until the singing starts”.’

After their death Mr Hearns said: ‘In my mind I could hear her telling him “John, I’ll see you at 12 noon sharp”.’

Rev David Green the pastor of the Allen Temple Church in Tampa, where Mr Clark served as a trustee, said: ‘They had a marriage that was grounded by their faith.’