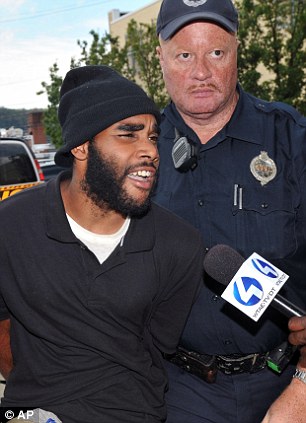 Arrested: Klein Michael Thaxton, left, is lead into Pittsburgh Police headquarters after being apprehended without incident at Three Gateway Center in Pittsburgh

A man who took a victim hostage in an office tower updated his Facebook page in real time as the crisis unfolded.

Klein Thaxton, 22, posted ‘I cant take it no more Im done bro’ as he made his way to the 16th floor and grabbed at least one person.

A siege began as Thaxton claimed to have a bomb and a weapon during which he also posted: ‘This life im livin rite now i dnt want anymore’.

Bizarrely some of Thaxton’s 566 friends on Facebook liked his updates whilst others mocked him or urged him to ‘keep it real’.

Among the more sober responses were calls for him to pray or to call them so they could talk him down.

Six hours later Thaxton – whose nickname is ‘Boogie’ – gave himself up with nobody injured.

The drama began at the Gateway Centre in downtown Pittsburgh just after 8am when Thaxton went into the offices of CW Breitsman Associates, which administers pension plans.

Police said that he ‘started asking questions about an individual’ although it was not clear about their relationship to each other.

When Thaxton grabbed his victim the police were called but they soon became aware he was updating his Facebook page in real time.

It features a picture of what appears to be Thaxton’s muscled torso and photos of world leaders on the homepage including Iran’s Mahmoud Ahmadinejad.

One status update from around 9am read: ‘welln pops youll never have to woryy about me again you’ll nevr need to by me anything no need to ever waste ur hard earned money on me. i’ll live n jail you dnt want me around anymore thats kool bye…i love u assata sis’

Another read: ‘This life im livin rite now i dnt want anymore ive lost everything and i aint gettn it back instead of walkn around n shy while n***** stunt on me n s***’.

Disturbing comment: ‘ive lost everything and i aint getting it back’ Thaxton wrote

Incredibly some of Thaxton’s friends tried to make fun of him and one urged him to ‘poop out the window??’

Seven people liked the last update before he was arrested which reads: ‘fake mafukaz, thats the shyt i dnt like!’

Relatives told him on Facebook to ‘stay strong’ and said ‘we can get through this’.

Among the responses was Kayla Mzfancy Garcia Klein who posted: ‘jus stop an pray u have family that loves u your mom is on tv crying if u need to talk jus call me it’s not worth it u are going to be ok u always been a good person don’t let people get to u’

Wright Williams said: ‘They’re trying to explain your situation better now on the news, man, they’re trying to cut down the tension so everything can get resolved peacefully.’

And in an ham-fisted attempt to defuse the situation Markus Bradley wrote: ‘Man Klein Michael Thaxton come on cuz u better then that man let dat girl go cuz f*** dat b****’.

Thaxton’s Facebook page states that he served in the military and attended Triangle Tech, a trade school, until 2008.

Nate Harper, Pittsburgh’s police chief, said that Thaxton was talked down by officers and his mother who was put in touch with him. 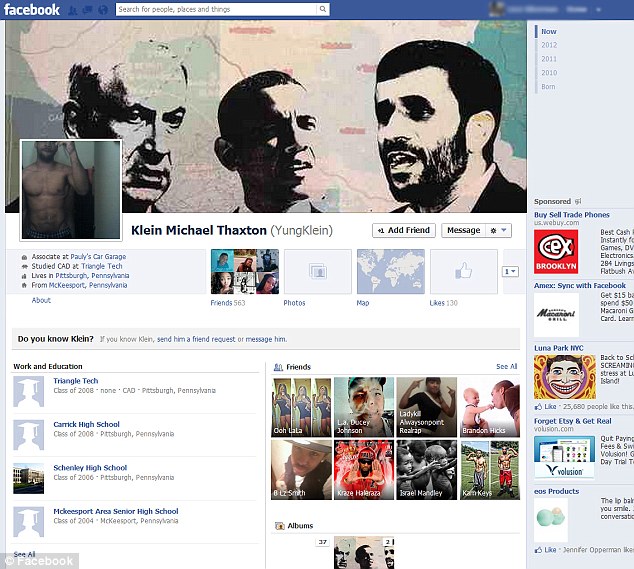 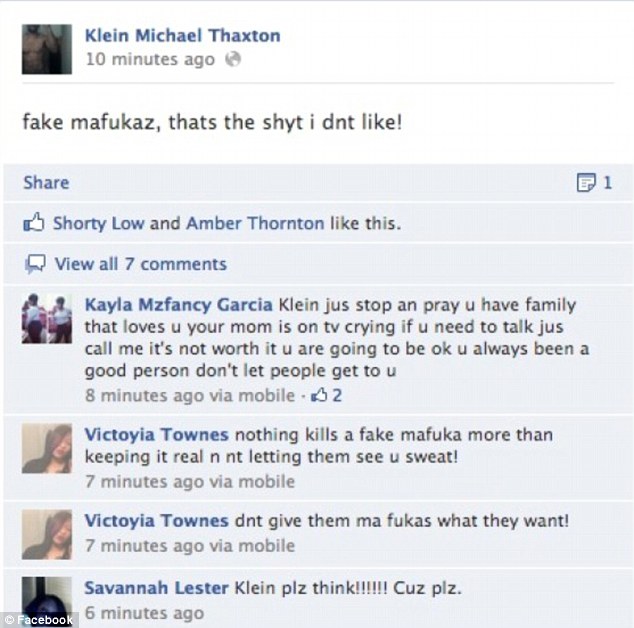 Online exchange: Thaxton’s friends and family were trying to convince him to end the standoff

He said: ‘Negotiators were successfully able to talk the suspect into surrendering’.

Thaxton is the second person in a month to update his Facebook status during a hostage situation after thieves did the same during a bungled robbery at a RadioShack in Denver.

One employee was held for six hours but the thieves eventually gave themselves up.

Thaxton’s went offline around 1pm, about five hours after he allegedly entered a benefits administration company’s office with a gun and asked to see the man he took hostage.

The Facebook exchanges had the potential to both help and harm the negotiations, Pittsburgh police Chief Nate Harper said. It’s helpful that Thaxton can see ‘that people are concerned about his well-being,’ Harper said, but ‘it is a distraction for negotiating.’

Police negotiators were in contact with Thaxton after he took the hostage shortly after 8am on the 16th floor of Three Gateway Center, one of six office buildings that dominate the city skyline, Pittsburgh Police Chief Nate Harper said.

Harper described the suspect as ‘ex-military.’ He said no injuries had been reported and no shots had been fired. 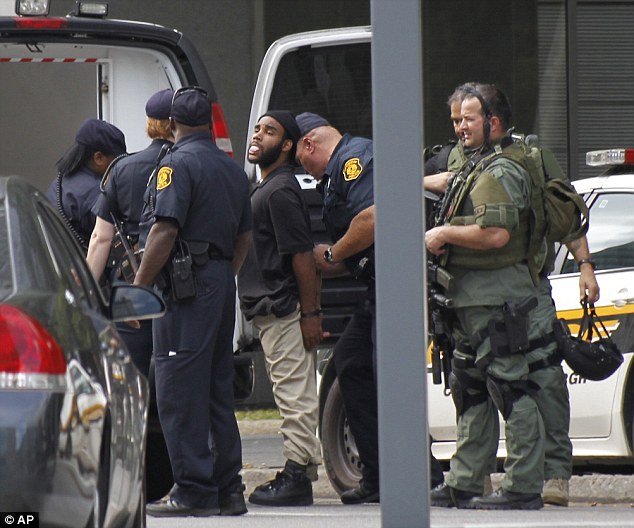 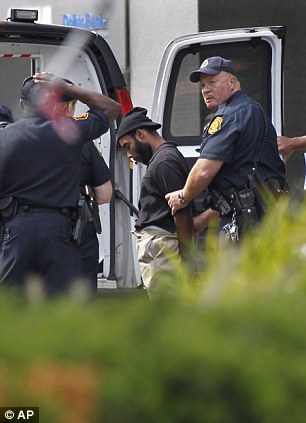 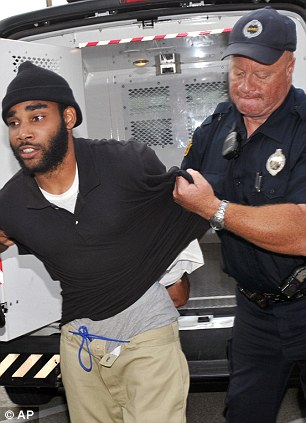 Crisis resolved: Thaxton surrendered to police five hours after allegedly walking into an office building in Pittsburgh at taking a hostage at random

A worker on the same floor said the hostage-taking unfolded inside the offices of CW Breitsman Associates, a firm that runs employee-benefits programs. This information has since been confirmed by Harper, according to CBS.

A police spokeswoman identified the hostage as Charles Breitsman, owner of CW Breitsman Associates, but it wasn’t immediately clear why he was targeted.

‘(Thaxton) is a sick young man and we do need to take measures to see he is taken care of as well,’ police spokeswoman Diane Richard said. 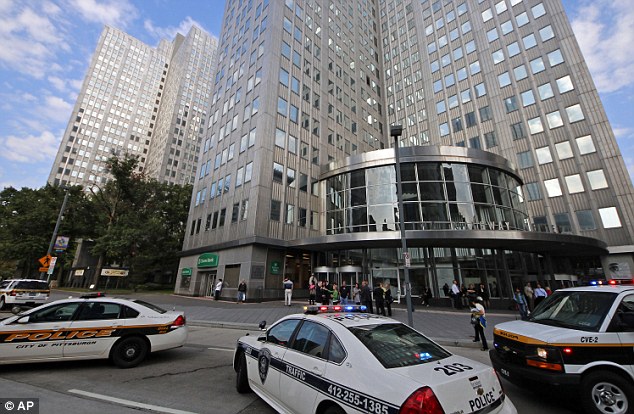 Hostage situation: Police block off the area around Three Gateway Center, building left rear, where they are negotiating with a man who claims to have a bomb, in downtown Pittsburgh 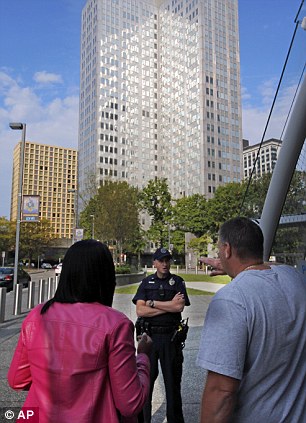 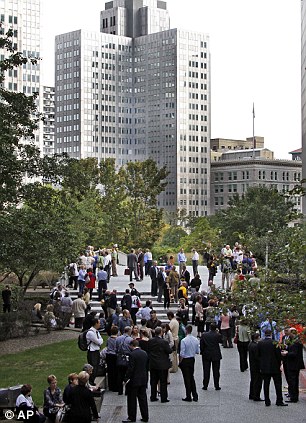 Crisis: People evacuated by Pittsburgh Police from the Gateway Three office building, left rear, wait outside as the police negotiate with a suspect 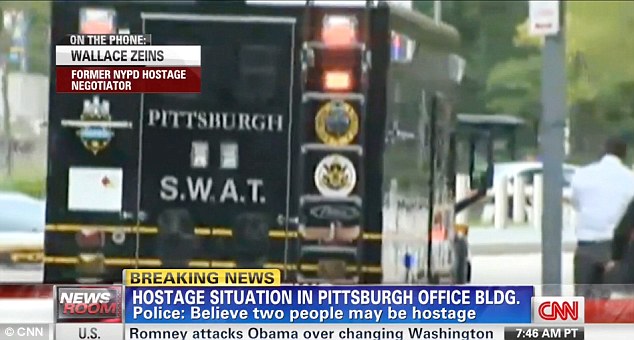 Emergency: A SWAT team arrived at the high-rise building where a hostage situation is unfolding

The chief said the man isn’t an employee at the firm. He said the suspect was cooperating with negotiators and is ‘not being irrational.’

‘No one knows why he’s doing this except him,’ Harper told reporters.

‘His demeanor is, from what I understand, relatively calm, and he’s sitting there talking to the negotiator at this time,’ Harper told reporters.

Police brought the suspect’s mother to the office building and put her in touch with Thaxton, Harper said. She left the building shortly after 1pm, telling reporters that she hoped her son would get the help he needed.

She didn’t know what drove her son to take a hostage, according to Harper.

Kathi Dvorak, an administrative assistant at AXA Advisors, said a woman ran into her office yelling for someone to call 911. A second woman ran in and said her office was being robbed.

Police arrived soon after and began evacuating the building.

Police Chief Harper said during a press conference there was no immediate motive, nor was it known what weapons, if any, Thaxton had.

He claimed to have a bomb, but that has not been independently confirmed, the chief said.

‘We are negotiating with that individual,’ the chief said. ‘We are willing to talk as long as it takes to resolve this in a safe and orderly fashion.’ 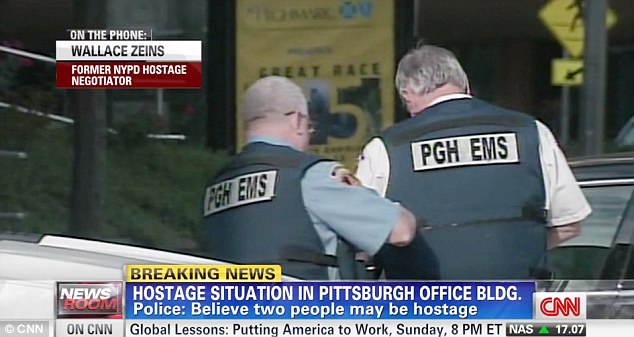 Hostage talk: The Pittsburgh police chief said the suspect, a man in his 20s, is negotiating with officials 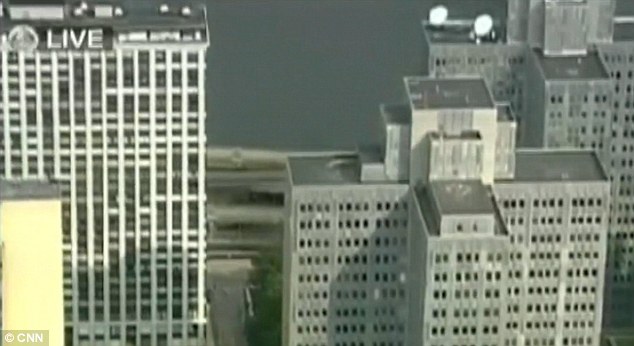 Several hundred people milled around about a half-block from the 24-story building after police evacuated it. A light rail stop nearby was closed and at least 20 emergency vehicles surrounded the building.

Joel Kirchartz, a 28-year-old web developer who works on the 17th floor, said he and his co-workers looked out the windows Friday morning and ‘a bunch of cops pulled up with all sorts of sirens going; there must have been 20 of them.’ He said he went downstairs to find out what was happening and by the time he got outside, police had sealed the building.

Another worker, Sarah Vereb, said she was at her desk when she was ordered to leave the building shortly after a friend called to report that she wasn’t being allowed up from the lobby. 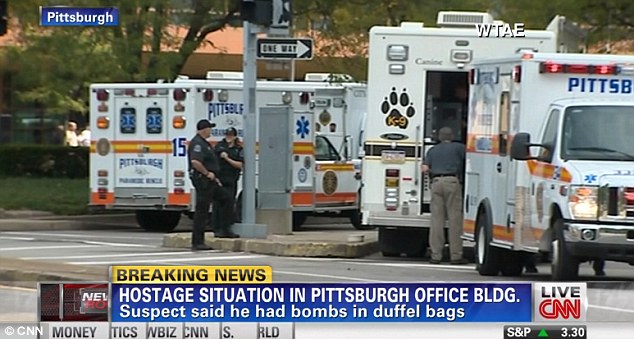 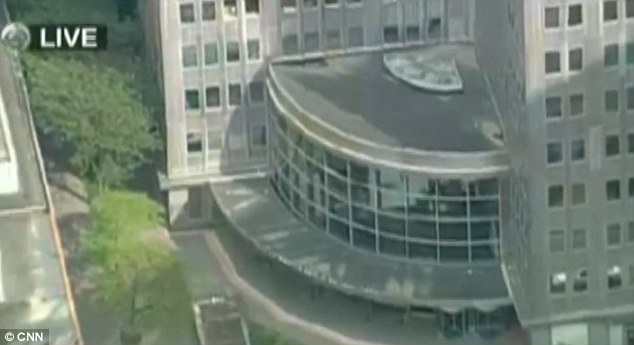 The incident took place inside the offices of CW Breitsman Associates, a firm that runs employee-benefits programs 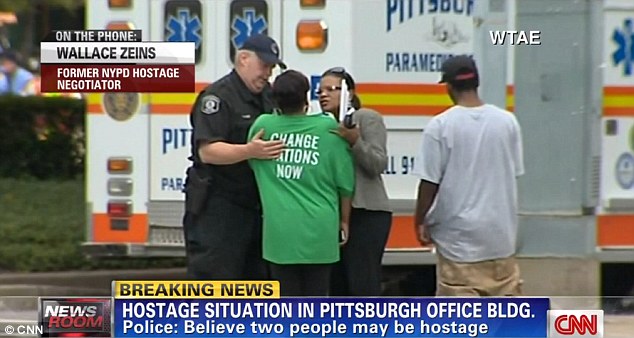 Police described the suspect as ‘ex-military’ with a criminal background

Hundreds of workers walked down the stairwell. Vereb said the exodus was orderly and ‘very, very quiet.’

A phone message left for the building’s Santa Monica, California-based ownership group was not immediately returned. The building complex management office confirmed the evacuation and said it was working with police.