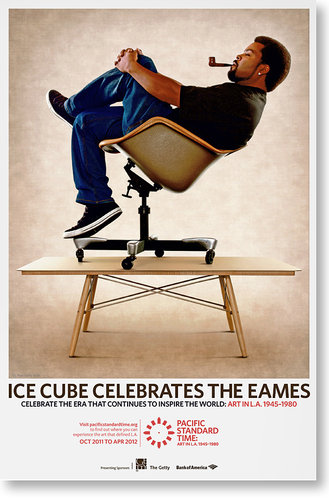 In the late ’80s, before he became famous as a member of the Compton, Calif., gangsta-rap group N.W.A., Ice Cube studied architectural drafting at a trade school in Arizona. This biographical detail makes the rapper’s appearance in a new video celebrating midcentury design icons Charles and Ray Eames only slightly less incongruous.

In the video, made for “Pacific Standard Time: Art in L.A. 1945-1980,” the sprawling Getty Institute-organized collection of exhibitions on the postwar Southern California art scene, Ice Cube tours the Eames House in the Pacific Palisades neighborhood, marveling at the resourcefulness of the husband-and-wife team.

“Got off-the-shelf factory windows, prefabricated walls,” he says, sounding as if he were admiring a tricked-out low rider. “They was doing mash-ups before mash-ups even existed.”

The rapper-turned-actor got involved in the project after being approached by an advertising agency working on behalf of the show’s organizers, and said he welcomed the chance to celebrate his hometown.

“What was appealing was showing off Los Angeles to people who think they know what Los Angeles is all about,” said Ice Cube, who is seen in the two-minute video cruising in a convertible 1960s Lincoln Continental and explaining the difference between the city’s “bougie” and “gangsta” freeways.

Ice Cube discussed his appreciation of the Eameses and his favorite architecture in Los Angeles in a conversation with a reporter.

I had learned about them when I was studying architectural drafting. Back then, I didn’t know I was going to make money. So being that they put together a house in two days and used discarded materials — something about their style caught on.

As I got older, I could equate it to sampling. I see that’s what we were doing, taking discarded records from the ’60s and ’70s and revamping them.

In the video, you seem right at home in the Eames House.

If you were an artist, which I am, this seems like the house that you want to be in. It reminded me of something that defined the style. In Los Angeles, you see a lot of McMansions, where the house takes all the land. Here, it seemed they built this thing inside of a park. It kept the serene, quaint feel. Anybody could go there and collect their thoughts.

I enjoyed hearing you tick off your favorite buildings in Los Angeles, including one I was unaware of: 5 Torches.

The 5 Torches is an elegant ’hood restaurant. This is where all the old players went to hang out.

I didn’t want to show off the monuments that everybody knows. I wanted to highlight the ones in the neighborhood that we grew up in, like Brolly Hut. That’s just a hamburger stand, but it’s uniquely made, like a hat or a hut. Or Randy’s Donuts.

All these things are monuments to us — or were to me, growing up.

What about the Memorial Coliseum, where your beloved Raiders once played?

I think it’s great. But it’s a blessing and a curse. You don’t want to tear it down because of what it means to Los Angeles: Super Bowl I and the ’84 Olympics were held there. But it’s outdated, so nobody who wants a luxury box wants to play a game there. It’s the reason we don’t have a team right now.

Growing up, what was your experience with the more affluent areas, like Beverly Hills and Bel-Air?

My grandmother worked at one of those Bel-Air mansions and we would go — not too often, but every now and then — to pick her up. Hollywood was probably 12 miles from my house, but it might as well have been a million miles away.

The only time I saw that world was on TV. Until I started making records.

Did you move to a big house in the hills once you became successful?

Ain’t that what it’s all about: providing a better way for your family than you had? It’s a Mediterranean-style house and it feels, to me, like an Egyptian palace. Though I haven’t been on my architect game in 25 years.

But you still try to make good design a part of your life?

Yeah, a lot. What I learned from architectural drafting is that everything has to have a plan to work. You just can’t wing it. I can’t get all the materials I need for a house and just start building.

Whether it’s a career, family, life — you have to plan it out.

How are your drafting skills these days?

You don’t want to live in nothing I draw. I got a certificate. For a year. In ’88. I don’t think I picked up a T-square since.

Woman 'befriended $30million lottery winner, swindled him out of his money and then murdered him before burying him in concrete'