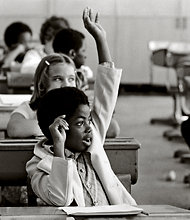 Jimmy Dugar on his first day in 1978 at a mostly white elementary school in Cincinnati.

AMID the  ceaseless and cacophonous debates about how to close the achievement gap, we’ve turned away from one tool that has been shown to work: school desegregation. That strategy, ushered in by the landmark 1954 Supreme Court decision in Brown v. Board of Education, has been unceremoniously ushered out, an artifact in the museum of failed social experiments. The Supreme Court’s ruling that racially segregated schools were “inherently unequal” shook up the nation like no other decision of the 20th century. Civil rights advocates, who for years had been patiently laying the constitutional groundwork, cheered to the rafters, while segregationists mourned “Black Monday” and vowed “massive resistance.” But as the anniversary was observed this past week on May 17, it was hard not to notice that desegregation is effectively dead. In fact, we have been giving up on desegregation for a long time. In 1974, the Supreme Court rejected a metropolitan integration plan, leaving the increasingly black cities to fend for themselves.

A generation later, public schools that had been ordered to integrate in the 1960s and 1970s became segregated once again, this time with the blessing of a new generation of justices. And five years ago, a splintered court delivered the coup de grâce when it decreed that a school district couldn’t voluntarily opt for the most modest kind of integration — giving parents a choice of which school their children would attend and treating race as a tiebreaker in deciding which children would go to the most popular schools. In the perverse logic of Chief Justice John G. Roberts Jr., this amounted to “discriminating among individual students based on race.” That’s bad history, which, as Justice Stephen G. Breyer wrote in an impassioned dissent, “threaten[s] the promise of Brown.”

To the current reformers, integration is at best an irrelevance and at worst an excuse to shift attention away from shoddy teaching. But a spate of research says otherwise. The experience of an integrated education made all the difference in the lives of black children — and in the lives of their children as well. These economists’ studies consistently conclude that African-American students who attended integrated schools fared better academically than those left behind in segregated schools. They were more likely to graduate from high school and attend and graduate from college; and, the longer they spent attending integrated schools, the better they did. What’s more, the fear that white children would suffer, voiced by opponents of integration, proved groundless. Between 1970 and 1990, the black-white gap in educational attainment shrank — not because white youngsters did worse but because black youngsters did better.

Not only were they more successful in school, they were more successful in life as well. A 2011 study by the Berkeley public policy professor Rucker C. Johnson concludes that black youths who spent five years in desegregated schools have earned 25 percent more than those who never had that opportunity. Now in their 30s and 40s, they’re also healthier — the equivalent of being seven years younger.

Why? For these youngsters, the advent of integration transformed the experience of going to school. By itself, racial mixing didn’t do the trick, but it did mean that the fate of black and white students became intertwined. School systems that had spent a pittance on all-black schools were now obliged to invest considerably more on  African-American students’ education after the schools became integrated. Their classes were smaller and better equipped. They included children from better-off families, a factor that the landmark 1966 Equality of Educational Opportunity study had shown to make a significant difference in academic success. What’s more, their teachers and parents held them to higher expectations. That’s what shifted the arc of their lives.

Professor Johnson takes this story one big step further by showing that the impact of integration reaches to the next generation. These youngsters — the grandchildren of Brown — are faring better in school than those whose parents attended racially isolated schools.

Despite the Horatio Alger myth that anyone can make it in America, moving up the socioeconomic ladder is hard going: children from low-income families have only a 1 percent chance of reaching the top 5 percent of the income distribution, versus children of the rich, who have about a 22 percent chance.

But many of the poor black children who attended desegregated schools in the 1970s escaped from poverty, and their offspring have maintained that advantage. Of course desegregation was not a cure-all. While the achievement gap and the income gap narrowed during the peak era of desegregation, white children continued to do noticeably better. That’s to be expected, for schools can’t hope to overcome the burdens of poverty or the lack of early education, which puts poor children far behind their middle-class peers before they enter kindergarten. And desegregation was too often implemented in ham-handed fashion, undermining its effectiveness. Adherence to principle trumped good education, as students were sent on school buses simply to achieve the numerical goal of racial balance. Understandably, that aroused opposition, and not only among those who thought desegregation was a bad idea. Despite its flaws, integration is as successful an educational strategy as we’ve hit upon. As the U.C.L.A. political scientist Gary Orfield points out, “On some measures the racial achievement gaps reached their low point around the same time as the peak of black-white desegregation in the late 1980s.”

And in the 1990s, when the courts stopped overseeing desegregation plans, black students in those communities seem to have done worse. The failure of the No Child Left Behind regimen to narrow the achievement gap offers the sobering lesson that closing underperforming public schools, setting high expectations for students, getting tough with teachers and opening a raft of charter schools isn’t the answer. If we’re serious about improving educational opportunities, we need to revisit the abandoned policy of school integration.

In theory it’s possible to achieve a fair amount of integration by crossing city and suburban boundaries or opening magnet schools attractive to both minority and white students. But the hostile majority on the Supreme Court and the absence of a vocal pro-integration constituency make integration’s revival a near impossibility.