The portrait for the carte-de-visite of Sojourner Truth, the African-American abolitionist and women’s rights advocate, was taken in Battle Creek, Mich., in the 1860s (Slide 5). She wears an elegant silk dress and shawl. With one hand resting on her hip, the other on the arm of the chair, her pose is majestic and determined. She stares resolutely into the camera.
But it is the object in her lap that remains one of the image’s most revelatory details: an open daguerreotype of her grandson James Caldwell, a soldier during the Civil War.
The daguerreotype’s pride of place speaks not only to Truth’s love for her grandchild but also to her passionate engagement with photography. As Deborah Willis and Barbara Krauthamer write in their groundbreaking new book, “Envisioning Emancipation: Black Americans and the End of Slavery” (Temple University Press), Truth was probably the first black woman to actively distribute photographs of herself.
Those pictures were meant to affirm her status as a sophisticated and respectable “free woman and as a woman in control of her image.” The public’s fascination with carte-de-visites, small and collectible card-mounted photographs, allowed her to advance her abolitionist cause to a huge audience and earn a living through their sale. “I Sell the Shadow to Support the Substance,” proclaimed the famous slogan for these pictures. 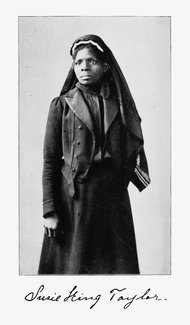 Courtesy of the Library of CongressSusie King Taylor, 1902.

Truth was not alone in her understanding of the power of photography. A host of other African-Americans, both eminent and ordinary, employed the medium as an instrument of political engagement and inspiration. “Envisioning Emancipation” argues that photography was not incidental but central to the war against slavery, racism and segregation in the antebellum period of the 1850s through the New Deal era of the 1930s.
The book explores how blacks “positioned themselves and were posed by others” in order to advance, question or alter prevailing ideas about race. It examines the ways the national debate about slavery was played out in photographs, for example, from the standpoint of abolitionists, who published them as proof of the brutality and immorality of slavery, and its supporters, who engaged photographs as visual evidence of its “natural order and orderliness.”
Pseudoscientists, like Louis Agassiz, the Swiss-born and Harvard-trained zoologist, adapted the medium to further notions of black aberrance and inferiority. Agassiz employed invasive daguerreotypes of naked slaves — the “pornography of forced labor,” as they have been aptly described — to verify his theory of polygenesis, the separate human origins of Africans and Europeans, and emphasize the relative lowliness of the former.
Abolitionists used photographs to convince Northern whites — for whom the prospect of emancipation elicited responses ranging from skepticism to violence — of the unjustness of slavery. They stirred public sentiment by offering visual evidence of slavery’s abuses as well as of the wholesomeness of an emerging class of freed blacks. Juxtaposing pictures of hapless children, posed barefoot and dressed in ragged clothes, with images of the same children wearing neatly pressed and undamaged garments, for example, abolitionists were able to convey the idea that a formerly enslaved people, now rendered as attractive and healthy, were worthy of liberation. 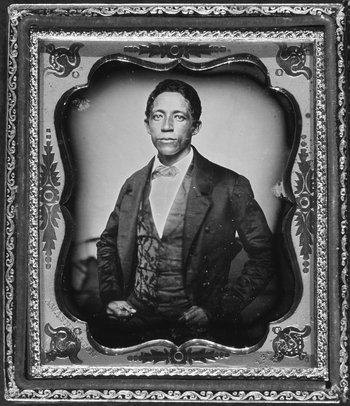 Augustus Washington, Courtesy of the Library of CongressUrias Africanus McGill, a Baltimore-born merchant, in Liberia. 1854.

As Ms. Willis and Ms. Krauthamer note, freedom for African-Americans was not instantly achieved with the implementation of the Emancipation Proclamation in 1863; it evolved fitfully, over many decades. During that time, it was photographs created largely by and for African-Americans that helped an oppressed people to imagine their own freedom. Prominent black leaders, including Frederick Douglass and Harriet Tubman, routinely turned to the medium, much as Sojourner Truth did, to further their abolitionist campaigns.
Soon, increasingly inexpensive imaging technology, coupled with a growing national network of black-owned photo studios, permitted African-Americans of all economic classes, even “the servant girl,” as Douglass observed, to construct their own versions of themselves. This affirmative imagery served to countermand destructive and pervasive stereotypes, steeling African-Americans against the ruthless forces of intolerance while simultaneously convincing white people of their shared humanity.
In the end, “Envisioning Emancipation” recounts a dynamic history of black self-possession and self-determination, one that challenges the abiding myth of the crusade against slavery and segregation: that of passive black victims who obtained freedom mostly through the benevolence and generosity of their white saviors. 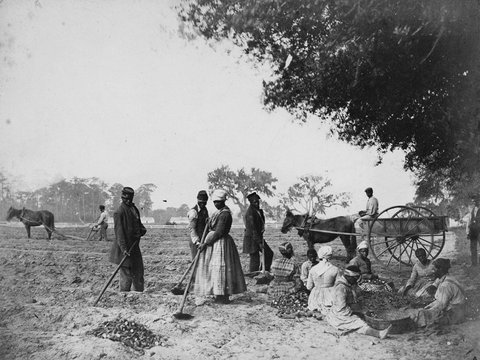 That myth does not die easily. It haunts popular culture, no more so than in Steven Spielberg’s just-released film about the 16th president’s epic battle against slavery, “Lincoln.” Despite the nuanced portrayal of its protagonist, “Lincoln” is almost devoid of images of active black resistance and protest, ignoring a wealth of research “demonstrating that slaves were crucial agents in their emancipation,” as the historian Kate Masur wrote last month in this newspaper.
“For my community, the message has been clear,” the writer Ta-Nehisi Coates recently observed, “the Civil War is a story for white people — acted out by white people, and on white people’s terms — in which blacks feature strictly as stock characters and props.” “Envisioning Emancipation” brilliantly rewrites this story, insisting that we acknowledge the names and faces of people who have been invisible for too long. 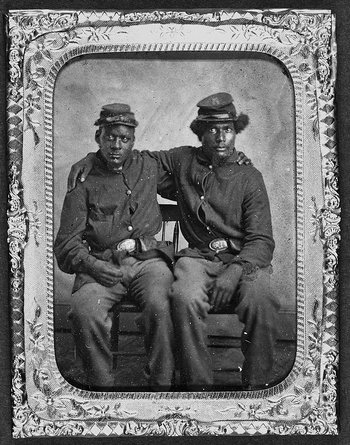 Courtesy of the Library of CongressTwo brothers in arms, 1860s.