By MONICA DAVEY
Published: January 2, 2013
CHICAGO — This city’s 471st homicide of 2012 happened in the middle of the day, in the middle of a crowd, on the steps of the church where the victim of homicide 463 was being eulogized. Sherman Miller, who was 21, collapsed amid gunfire not far from the idling hearse that was there to carry away James Holman, 32, shot to death a week earlier.  The funeral shooting at St. Columbanus Catholic Church on the South Side left neighbors fretting that no place, not even a church, felt safe any longer. “It’s become the Wild Wild West,” said Charles Childs Jr., who had watched from across the street as mourners screamed and scattered.
The shooting, on Nov. 26, was one more jarring reminder of just how common killings seem to have grown on the streets of Chicago, the nation’s third-largest city, where 506 homicides were reported in 2012, a 16 percent increase over the year before, even as the number of killings remained relatively steady or dropped in some cities, including New York. 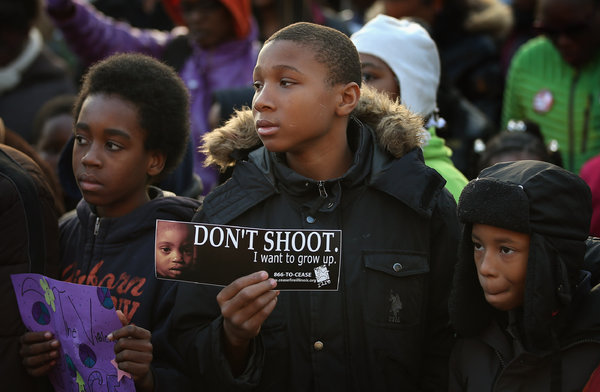 Anton Watson, center, with other children, parents and teachers at a Chicago peace vigil held amid a rising number of killings.

But the overall rise in killings here blurs another truth: the homicides, most of which the authorities described as gang-against-gang shootings, have not been spread evenly across this city. Instead, they have mostly taken place in neighborhoods west and south of Chicago’s gleaming downtown towers.
Already, 2013 began with three gun homicides on New Year’s Day, two of them on the South Side. Like other cities, Chicago has long been a segregated place, richer and whiter on the North Side, and the city’s troubling increase in killings has accentuated a longstanding divide.
“It’s two different Chicagos,” said the Rev. Corey B. Brooks Sr., the pastor of New Beginnings Church on the South Side, who had led the funeral service for Mr. Holman the day shots rang out, then found himself leading Mr. Miller’s funeral service a week later. The authorities here have described both shootings as gang related. “If something like that had happened at the big cathedral in downtown Chicago or up north at a predominantly white church, it would still be on the news right now, it would be such a major thing going on.”
More than 80 percent of the city’s homicides took place last year in only about half of Chicago’s 23 police districts, largely on the city’s South and West Sides. The police district that includes parts of the business district downtown reported no killings at all. And while at least one police district on the city’s northern edge saw a significant increase in the rate of killings, the total number there still was dwarfed by deaths in districts on the other sides of town, and particularly in certain neighborhoods.

A New York Times analysis of homicides and census data in Chicago compared areas near murders to those that were not. Residents living near homicides in the last 12 years were much more likely to be black, earn less money and lack a college degree. 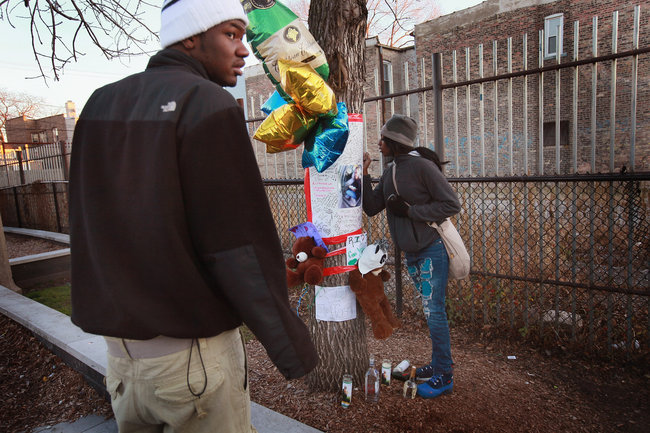 Marcell Carter, left, 19, and Samantha Boyd, 18, at a makeshift memorial to a friend who was fatally shot on Chicago’s West Side.

Along the streets downtown and in neighborhoods on the North Side not far from Lake Michigan, some residents acknowledged that they had heard about a rise in the city’s homicide rate, but said it had not affected their own sense of safety. “This area is a bit of a Garden of Eden,” said Gwen Sylvain, as she walked dogs along a residential street not far from the Loop.
Others said they rarely had reason to go to the Chicago’s South or West Sides, only a few miles away, and some longtime residents said they had never once ventured to such neighborhoods. Police business on the North Side rarely seems to rise beyond an overly enthusiastic Cubs fan or a parking quibble, said Kyong Lee, who said that in the past he had, without consequence, forgotten to lock up his family’s shoe repair business.
In Back of the Yards, a South Side neighborhood near the city’s old meatpacking district, the tenor was far different. Mothers spoke of keeping their children inside from the moment school ended, and businessmen of decisions to lock the front doors of their shops during business hours. “I don’t go out at night,” said Jesse Martinez, who recalled the gun pressed to his head as he was robbed a few years ago inside the hat and boot store he has run for 32 years.
Over all, crime in Chicago dropped 9 percent in 2012 from the year before in what city officials say was the largest decrease in 30 years. Among crimes that saw dips last year: rape, robbery and car theft. With the city’s longtime gangs splintering into factions and increasing problems with retaliatory violence, homicides rose suddenly in the first three months of the year — running some 60 percent ahead of the year earlier — creating a pace that slowed significantly as the year went on. 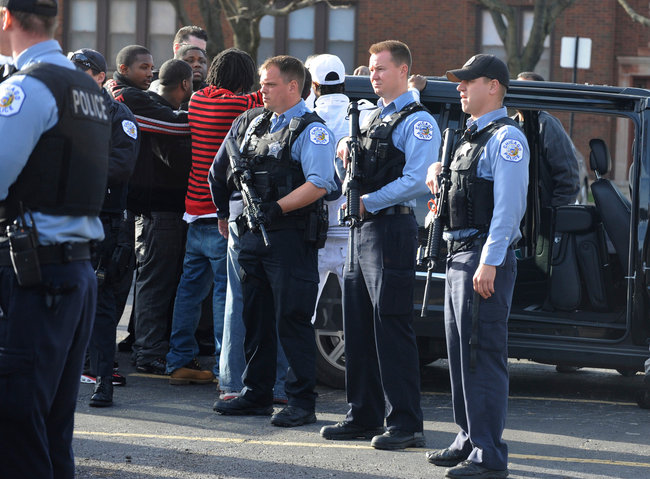 After receiving a report of a gun in a car, the Chicago police on Dec. 4 searched in the parking lot of a South Side church where a gang member’s funeral was being held.

City officials attributed the improvement to a broad anti-gang strategy that includes an elaborate police audit of gang members, removal of vacant buildings and efforts to involve neighbors. Some have called for increased gun control legislation; of 7,000 guns recovered by the Chicago police in recent months, handguns are most common, but 300 were assault weapons.
“A child shot is a child of the City of Chicago,” Mayor Rahm Emanuel, who lives on the North Side, said in an interview in which he addressed the long-held divisions in a city known for its endless array of distinct neighborhoods on the North, South and West Sides. “Don’t anybody think that it’s ‘over there,’ ” the mayor said. “It’s a tear on this city.”
No arrests have been made in the deaths of Mr. Holman or Mr. Miller, who died on the steps of the church that Al Capone’s mother once attended regularly and where Barack Obama distributed food to the needy just after he was elected president in 2008. The authorities say three guns were believed to be present when Mr. Miller died. The police say Mr. Miller was carrying a gun. And bullet casings from two other weapons were found on the steps.
At Mr. Miller’s funeral in December, a large contingent of Chicago police officers waited outside.
“It’s gotten to the point, unfortunately, where something as significant as a funeral is subject to gang violence, and I can’t even believe that we’re having this conversation,” Garry McCarthy, the police superintendent here, said in an interview. “I’m not willing to gamble that maybe they’re not going to bring their guns this time.”
Inside that funeral, at another church on the city’s South Side, Mr. Brooks stood near Mr. Miller’s coffin, recalling what had happened at the last funeral. “Ever since then,” Mr. Brooks told Mr. Miller’s mother, who sat before him, “my heart has been so torn.” 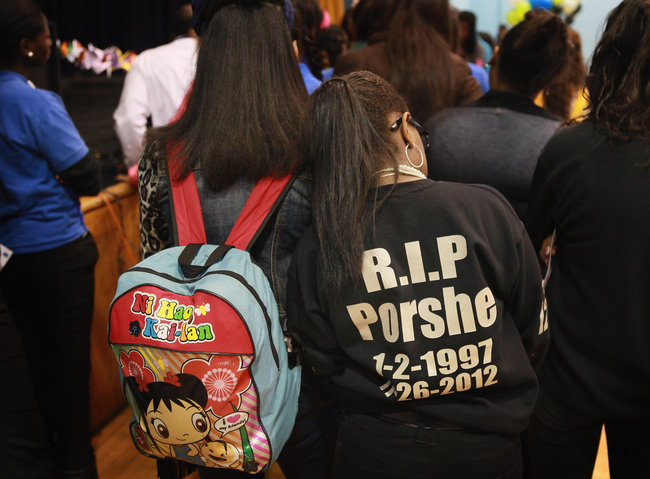 Classmates at a memorial service last month for Porshe Foster, 15, who was killed when she and three others were shot while in a friend’s yard.

As friends of the deceased stepped past his framed photograph to stand at a microphone, Mr. Brooks called for peace in the church, read out his own cellphone number (in case, he said, anyone needed it), and stopped one young man from launching into a rap, for fear, Mr. Brooks said later, of what new trouble that might stir.
In a corner of the church, a friend of Mr. Miller revealed text messages he had sent to her during Mr. Holman’s funeral, minutes before he was shot: “dis preacher like he talkin straight to me,” one of the messages read. “He talkin bout hurts and pain. I cant run from the pain cause its gone hurt me worse if I’m by myself because I gotta think about everything.” In tears, she recalled how she had replied to the texts with questions, but Mr. Miller never responded.