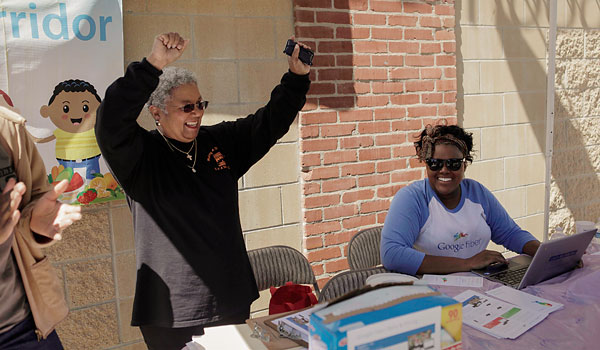 Margaret May, left, led a drive in the Ivanhoe area of Kansas City, Mo., to preregister people for Google’s new Internet service.

KANSAS CITY, Mo. — With Google’s promise last year to wire homes, schools, libraries and other public institutions in this city with the nation’s fastest Internet connection, community leaders on the long forlorn, predominantly black east side were excited, seeing a potentially uplifting force. They anticipated new educational opportunities for their children and an incentive for developers to build in their communities.

But in July, Google announced a process in which only those areas where enough residents preregistered and paid a $10 deposit would get the service, Google Fiber. While nearly all of the affluent, mostly white neighborhoods here quickly got enough registrants, a broad swath of black communities lagged. The deadline to sign up was midnight Sunday.

The specter that many blacks in this city might not get access to this technology has inflamed the long racial divide here, stoking concern that it could deepen.

“This is just one more example of people that are lower income, sometimes not higher educated people, being left behind,” said Margaret May, the executive director of the neighborhood council in Ivanhoe, where the poverty rate was more than 46 percent in 2009. “It makes me very sad.”

For generations, Kansas City has been riven by racial segregation that can still be seen, with a majority of blacks in the urban core confined to neighborhoods in the east. Troost Avenue has long been considered the dividing line, the result of both overt and secretive efforts to keep blacks out of white schools and housing areas and of historical patterns of population growth and settlement, said Micah Kubic, with the nonprofit Greater Kansas City Local Initiatives Support Corporation. 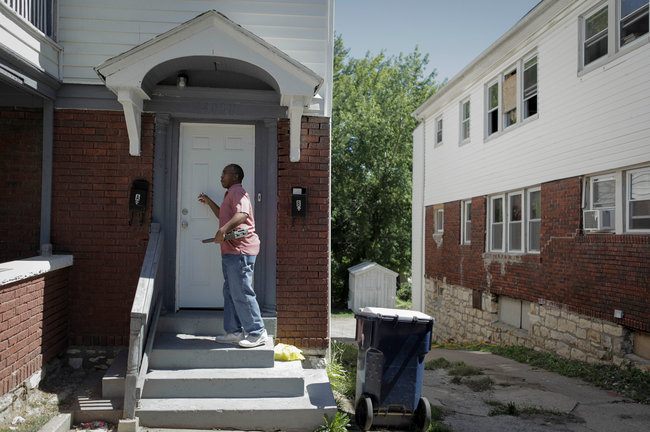 Myron T. Moore went door to door on Saturday in Ivanhoe to sign up residents.

Nearly three in four people living east of Troost in Kansas City’s urban center are black, according to an analysis of 2010 Census data by Andrew Beveridge, a sociology professor at Queens College in New York City.

As recently as 15 to 20 years ago, black residents said, they did not venture west of Troost for fear of harassment from the police. Today, they complain that their schools are failing, crime is rampant and infrastructure is dilapidated.

“See all this filthiness?” Vic, a 47-year-old lifelong resident of the east side who declined to give his last name, said as he stared at hip-high brush in a vacant lot. He expressed doubt about how much of an inroad Google Fiber would make. “You can’t get the neighborhood to come together to get this cleaned up,” he said. “How you going to get them to care about that?”

Convincing residents of the importance of Internet access — to apply for jobs, do research, take classes and get information on government services — was one of Google’s primary challenges here. The service is currently being offered only here and in Kansas City, Kan. About 25 percent of homes in both cities do not have broadband, and 46 percent of blacks do not use the Internet.

Qualifying neighborhoods will get Internet service with speeds of up to a gigabit per second — 100 times faster than the average broadband connection — for $70 a month. Google is also offering a television service along with Internet for $120 a month. Schools, libraries, hospitals and other institutions in areas that qualify would receive gigabit connections for free.

But the feature most attractive to low-income areas is Google’s offer of a free 5-megabit Internet connection for 7 years, but which requires a one-time $300 construction fee.

As of Sunday evening, only about 32 percent of people in the neighborhoods that qualified for Google Fiber were black, while just over 54 percent were white, according to Mr. Beveridge.

With almost all of Kansas City, Kan., including low-income areas, achieving their sign-up goals, Google’s focus over the weekend was here in Missouri, where it worked with community groups to register people.

The dividing line of Troost “certainly predated us,” said Kevin Lo, the general manager of Google Access, which oversees the Fiber operation. “It’s unrealistic to expect that we can, in six weeks’ time, close the gap.” 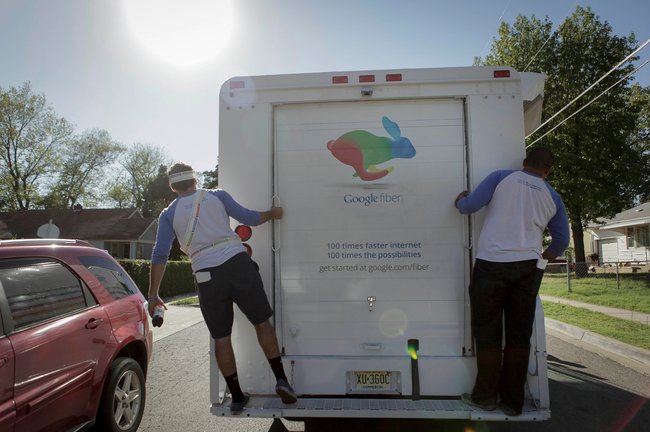 Google even sent out a team in an ice cream truck to get people signed up. Leaders fear that black neighborhoods that do not register enough residents to qualify for the service will lag further behind.

Yet Mr. Lo said helping close the digital divide was “absolutely a core part of our mission.”

Google planned to announce on Monday that neighborhoods that did not qualify this time would have another opportunity to do so, though it did not say when. It also said it would offer grants to community groups in Kansas City to promote digital literacy.

On Saturday, Ms. May, the neighborhood council director, and Google workers set up a tent outside the Ivanhoe community center and urged passers-by to sign up, with the center using a private donation to pay the $10 deposits and giving out Rice Krispies treats. One woman who registered herself offered to register her neighbor’s address as well.

Myron T. Moore, a neighborhood activist in Ivanhoe, walked door to door with a clipboard asking people to write down their name, address and telephone number so the council could sign them up and pay their deposit. When Melissa Gilmore, 34, said she did not live at the house where she had answered the door, Mr. Moore asked if she could sign up the people who did live there. They were not home, and Ms. Gilmore said she was not comfortable doing so, though she did give her own address.

Google rolled an ice cream truck through one area, as a woman on a loudspeaker enticed residents to register. Several Google workers walked alongside, answering questions and handing out brochures and ice cream sandwiches.

Advertisements ran all weekend on Hot 103 Jamz, a hip-hop and R&B radio station, urging people to sign up for the good of their communities, even if they were not going to get the service.

In some neighborhoods, residents feared that if the service were unavailable in their communities, property values would drop and their schools and hospitals may fall further behind those in affluent areas. Businesses that rely on technology might shun their communities, they said, denying them jobs and economic development opportunities.

“It’s just one more step to the east side not being able to compete with the west,” said Monsherry Terrell, 40, who lives in the east and runs an Internet shopping business.

During the sign-up, Google faced other practical problems. Many people did not have credit or debit cards, which were required to register, or e-mail addresses. And it failed to account for numerous vacant homes in some communities, so it lowered the number of registrants needed to qualify in those areas.

Many people in black neighborhoods had not heard about Google Fiber, and many who knew only had a vague understanding of it.

Three men pulled up to Ms. May’s table in a white Ford Expedition, and one of them, Kevin Jackson, asked, “What’s that Google Fiber about?”

Mr. Jackson, 51, sighed when he found out that he would not be paid for signing up — he initially mistook the offer to pay the $10 registration fee for him to mean he would be given $10. Still, Mr. Jackson relented and gave over his personal information after prodding from Ms. May. “You’re helping Ivanhoe,” she said. “This has a deeper meaning.”

The Good, Racist People (Op-Ed Column by TA-NEHISI COATES of The Atlantic)

God's Wife Edited Out of the Bible — Almost