IT is just a metal door with three windows, the kind meant to keep the clamor of an elementary school hallway from piercing a classroom’s quiet. Other than paint the color of bubble gum, it is unremarkable.
But the pink door on Room 311 at Public School 163 on the Upper West Side represents a barrier belied by its friendly hue. On one side are 21 fourth graders labeled gifted and talented by New York City’s school system. They are coursing through public school careers stamped accelerated.
And they are mostly white.
On the other side, sometimes sitting for reading lessons on the floor of the hallway, are those in the school’s vast majority: They are enrolled in general or special education programs.
They are mostly children of color. 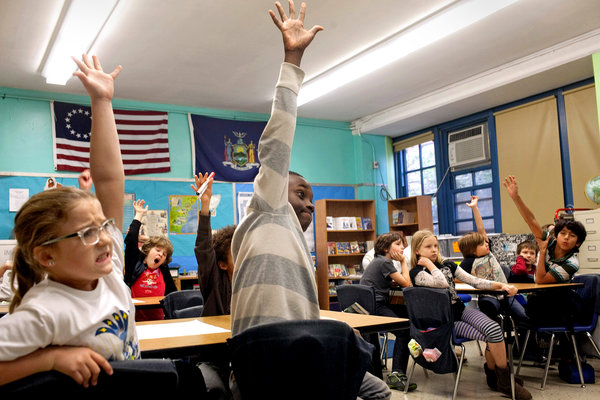 “I know what we look like,” Carolyn M. Weinberg, a 28-year veteran of P.S. 163, said of the racial disparities as she stood one day in the third-floor hallway between Room 318, where she and a colleague teach a fourth-grade general education class, and the one where Angelo Monserrate teaches the gifted class, Room 311.
“I know what you see,” said Ms. Weinberg.
There are 652 students enrolled at P.S. 163 this year, from prekindergarten through fifth grade. Roughly 63 percent of them are black and Hispanic; whites make up 27 percent; and Asians account for 6 percent.
This reflects the flavor of the neighborhood, and roughly matches the New York City school system’s overall demographics.
Yet in P.S. 163’s gifted classes, the racial dynamics of the neighborhood, the school itself and the school system are turned upside down.
Of the 205 children enrolled in the nine gifted classes, 97, or 47 percent, are white; another 31 of the students, or 15 percent, are Asian. And a combined 65 students, or 32 percent, are black and Hispanic.
In the 21 other classes that enroll the school’s remaining 447 students, only 80, or 18 percent, are white.
The disparities are most apparent in the lower grades.
Of the 24 students in Karen Engler’s kindergarten gifted class, one is black and three are Hispanic. Ayelet Cutler’s first-grade gifted class has 21 students, one of them black and two Hispanic. There are two blacks and two Hispanics among the 26 students in Athena Shapiro’s second-grade gifted class.
On a recent morning, a line of Ms. Cutler’s students moved from the classroom to the corridor, ahead of the general education class of Linda Crews. A string of mostly white faces and then a line of mostly black and Hispanic ones walked down the hall of a school named for a New York politician who sought to end inequities in education: Alfred E. Smith.