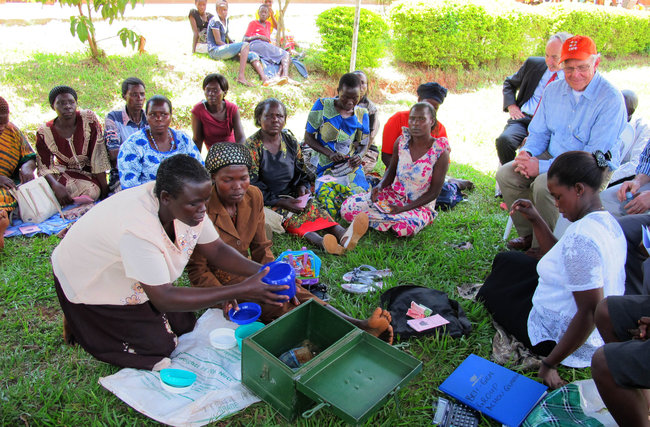 A clinic on the outskirts of Kampala, Uganda, that receives money from the United States for AIDS prevention.

KAMPALA, Uganda — Uganda’s sharp reduction of its AIDS rate has long been hailed as a Cinderella success story, inspiring a wave of aid programs and public health strategies to fight the disease across the developing world.

But as Secretary of State Hillary Rodham Clinton arrived here on Thursday, the news on AIDS in Uganda was not so bright: A new American-financed survey says that Uganda is one of only two African countries, along with Chad, where AIDS rates are on the rise.

The reversal is particularly disappointing to health experts given the time and attention that have been focused on AIDS here, and the billions of dollars spent.

Nearly a third of Uganda’s population in some areas had once been infected with AIDS or the virus that causes it. An aggressive public awareness campaign that urged medical treatment and monogamous sexual relationships led to a precipitous drop in infection rates in the 1990s.

But the coming survey said that H.I.V. infection rates in Uganda have increased to 7.3 percent today from 6.4 percent in 2005. Over roughly the same period, the United States, through its AIDS prevention strategy known as Pepfar, or the President’s Emergency Plan for AIDS Relief, spent $1.7 billion in Uganda to fight AIDS.

The report, the Uganda AIDS Indicator Survey, detailed the health status and sexual behavior of more than 20,000 Ugandans across the country. The results raise questions about the effectiveness of the United States’ AIDS-prevention strategy here.

H.I.V. and AIDS rates in Uganda are increasing not only in urban areas, but rural areas too, the survey shows. Adult husbands and wives, not youths or commercial sex workers, are the ones spreading the disease, according to the survey. By their late 30s, roughly one in 10 women now become H.I.V. positive. For men, roughly one in 10 are infected by their early 40s.

For both men and women, the survey shows, H.I.V. prevalence increases, rather than decreases, with wealth.

Health experts blamed Uganda’s government for becoming complacent since winning international acclaim, and reams of financial aid, for its AIDS efforts. But the survey suggests that development strategists have long misunderstood the nature of Uganda’s H.I.V. epidemic, as well.

“Something is not connecting properly,” said Dr. Musa Bungudu, the United Nations’ AIDS chief in Uganda. “There are a lot of sociocultural issues that need to be addressed. These are harsh realities.”

Uganda’s early success in battling H.I.V. included grass-roots behavioral change campaigns aimed at reducing the number of sexual partners among Ugandans. The United States shifted its policy in 2003, teaming up with faith-based organizations and adopting Pepfar’s emphasis on abstinence, monogamy and using condoms “for those most at risk.”

Billboards promoting that approach can be seen all over the capital, and the Pepfar-sponsored message — “Get Off the Sexual Network” — is published in YouTube videosand on radio.

But there has been a miscalculation: the strategy may have merely succeeded in driving certain behaviors further underground in this socially conservative country with close ties to American evangelicals.

On one hand, 90 percent of Ugandans today acknowledge sexual fidelity in a relationship as a health imperative, according to the survey results; on the other hand, roughly 25 percent of married men said they had multiple sexual partners.

The survey found that 75 percent of Ugandans were knowledgeable about condoms in sexual health but that fewer than 8 percent of married men who were having sex outside their marriage were using condoms.

Uganda’s hard-line approach toward homosexuality, which is outlawed here, also fuels the spread of AIDS, experts say. One report indicated that one-third of the male respondents who had sex with other men said they had previously been married to women and fathered children. Fewer than half use condoms.

Pepfar’s founding policies barred partnering with organizations that did not condemn prostitution, and called for 33 percent of financing to be spent on abstinence and fidelity programs.

“We have messages confusing what is right with what is safe,” says Canon Gideon Byamugisha, a religious leader and AIDS activist in Uganda. “If you have an environment that stigmatizes them, then don’t expect people to use condoms.”

Some argue that Uganda’s initial AIDS-prevention success was based on the extreme fear that the disease generated among the population.

“A lot of people saw a lot of friends and co-workers die from H.I.V.,” says Shanti Parikh, a medical anthropologist studying sexuality at Washington University in St. Louis who studies Uganda. The effect of risky sexual behavior was “very open and upfront.”

The huge inflow of foreign development aid also led to corruption and prompted the government, which contributes roughly one-tenth of its AIDS budget, to rely on outside financing. “They need to go back to square one,” said Dr. Bungudu, the United Nations official.

Dr. Christine Ondoa, Uganda’s minister of health, said in a statement that the results indicating AIDS remains “a significant health problem” here presented the government with an “an opportunity to recommit ourselves.”