Racism in sport is nothing to celebrate

South Africa’s leading liberal newspaper, the Mail & Guardian, recently ran an article about the racist abuse hurled at black members of the rugby team at Ben Vorster High, a former Afrikaans-only school for whites in Tzaneen, Limpopo. The abuse includes (present tense, because it’s possibly still going on) opposing teams and possibly fans (because the article fails to clearly give the who) calling these teenage boys “dogs” and “kaffir”, a racist slur used by whites against blacks in southern Africa.
“When their opponents in lily-white rugby teams start calling the black Ben Vorster High players ‘kaffirs’ during matches,” went the article’s opening salvo, “their response is always the same: Just look at the scoreboard.”
Invariably the scoreboard showed that the school’s more racially representative team (nine of the first team’s starting 15 are black and mostly from poorer, working-class families) was winning. But, the article hastily points out, they don’t win “because they’re black tokens in the sport or because someone felt sorry for them”. No siree, bob. They win because they worked for it.
Gauging from reactions on Twitter, the article was well received by white audiences. To them it was “good news”, “inspiring”, “a lovely, earthy story”, or some variation thereof. But there were grumblings of dissatisfaction and anger among black readers, myself included. 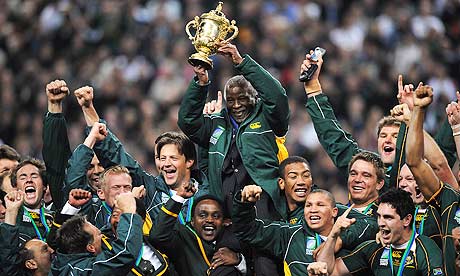 South Africans rejoice after winning the 2007 Rugby World Cup, but the sport has a history of racism. Photograph: Martin Bureau/AFP/Getty Images

Firstly, and purely from a news perspective, it was an inexplicable editorial choice to write in the racist hecklers as an amorphous, inscrutable body of white racism, and to leave unsaid what the schools, parents and teachers were doing to make the rugby field a safer, racism-free environment. Compare this approach to some of the recent coverage and responses to racist heckling in football in Europe, or another recent racist incident in school rugby at Paarl Gimnasium, a school in the Western Cape province. The second report isn’t perfect, but it at least presents the racism not as the students’ problem, but as something that school administrators should root out. Given that school is generally a place where greater vigilance against bullying, sexism, homophobia and racism is expected of administrators, it’s strange thatMail & Guardian gave no treatment whatsoever to this aspect of the story.
The paper opted instead to present the racist abuse as though it were one of the many ordinary, immutable challenges that the average school boy faces. Even Andre Hay, the first team coach for the past 13 years, is said to tell the boys to just ignore the racist taunts and focus on the game instead. Hay is also portrayed as though he doesn’t see a role for himself, other coaches or the schools in putting an end to the racism, as any sane adult might want to do.
The other aspect to this article that I, and I suspect others, found most enraging was that it relies on the myth that South Africa is a meritocracy in order to subtly cast these boys, who are obviously talented and working hard, like many other rugby players, into the racist trope of the “exceptional Negro” — or, in this case, the “exceptional Kaffir”. This centuries-old racist trope holds that these black people here — for their intellect, sporting prowess, fortitude, willingness to work hard, accent, or any number of traits not determined by race — aren’t like these here other black people. They’re more like us white people, the trope holds. They work hard and don’t expect things to be handed to them. In a generally racialised society and in a sport with a history of racism, whichrace quotas are attempting to undo, apparently “controversially”, the article holds the boys up as different from the black players who “rely” on quotas to make the team. And the difference between them, the article says, boils down to how hard they work. Like Quentin Tarantino’s Django, the black boys in Ben Vorster High’s rugby teams are the one kaffir in 10,000, according to the article’s narrative arch.
The other iffy things in the article — such as the fallacious Rainbow Nationalism blindness to race and the uninterrogated, unironic white-saviour complex of the members of the “traditional school community” who offer a “helping hand” to black students, whose parents are “mineworkers and domestic workers, or are unemployed” — punctuate what is an example of the kind of media narratives South African could really do without. And this is what the liberal press is publishing, and it was well received by much of the, dare I say, liberal white audience. Imagine what appears in the conservative press.
To be clear, Ben Vorster High, from other news reports and reports on itswebsite (Afrikaans only), seems to be getting many things right. The school doesn’t appear to be like schools in the Free State province, where it’s said that racism is rife and a Human Rights Commission investigation is under way into the situation. That’s anyway a low standard. What really went wrong here was mostly a lack of social awareness by Mail & Guardian’s editorial team. They didn’t tackle the story with the appropriate frame of reference and they didn’t report on the aspects of the story that would have given pause to those reading it as a good-news story. This was a disservice to the school, teachers, parents and pupils of Ben Vorster High, as well as the newspaper’s readers, many of whom seem comfortable enough in their obliviousness to readily accept sunshine journalism about race in South Africa.