Only three black people who want to be history teachers were accepted on to postgraduate teacher training courses last year, according to damning statistics that critics claim expose “institutional racism” in the British education system.

The figures are part of a wider picture in which just 17.2% of black African applicants, and 28.7% of black Caribbean applicants were taken on by teacher training institutions across all subjects, against 46.7% of white applicants.

The revelation provoked claims of racism in the system, with one of Britain’s first black professors calling for the government to do some “soul searching” over the state of the profession.

According to the annual statistical report by the Graduate Teacher Training Registry (GTTR) published last week, 30 black Caribbean, African or mixed-race people applied to read for a postgraduate certificate in education in history in 2013. One mixed-race applicant was accepted as were up to two black Caribbean or black African applicants – at best a 10% success rate. This stands in stark contrast to the 506 white people accepted on to history teacher training courses from the 1,937 who applied – a 26% success rate. The figures do not include applicants to the school direct training programme for top graduates with three or more years’ career experience. A further 19 applicants from other ethnic minority groups, including Indian, Pakistani and Bangladeshi, were awarded places. The ethnicity of 17 successful applicants was unknown.

Professor Heidi Mirza, who is of Caribbean origin, said that the government should be concerned by both the low number of black applicants and the lack of the success of those that apply. Nationally, while 17% of pupils in the UK are from black, Asian and ethnic minority backgrounds, only about 7% of teachers are. 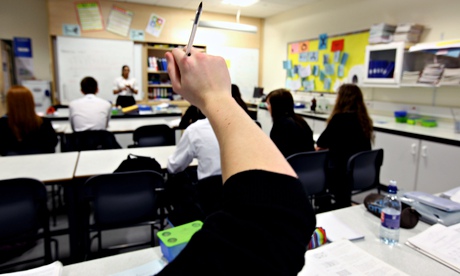 Just 17% of black African applicants, and 29% of black Caribbean applicants were taken on as trainee teachers across all subjects, compared with 47% of white applicants. Photograph: Jeff J Mitchell/Getty Images

Mirza, author of Respecting Difference: Race, Faith and Culture for Teacher Educators, said: “Diversity in our teacher workforce is crucial if British children are to be well prepared to be global citizens and successfully compete on the world stage.

“We need to do some soul searching in our teacher education provision and look at the insidious ways institutional racism keeps potential black, minority ethnic and refugee teachers from getting on and through their courses. I do think there is a hidden crisis in teacher education, which has slipped under the wire of Gove’s reforms in education.”

Professor John Howson, blogger and a former government adviser on teacher recruitment, said he was particularly concerned by the lack of black history teachers because it limited the variety of perspectives being heard in classrooms on Britain’s colonial heritage. A poem from John Agard, “Checking out me history“, about the dominance of the history of white males in classrooms resonates deeply with many in the black community.

Howson added that a reason for the poor recruitment of black teachers might be that they predominantly apply to London institutions that have a limited number of places. For example, GTTR statistics show that the University of East London received 172 applications from people of black Caribbean ethnicity, of which only 21 were accepted. However, Mirza said there was significant evidence that discrimination was a major factor.

She cited a survey on “Leadership aspirations and careers of black and minority teachers” in which more than half of the sample reported some sort of discrimination. Another survey found that black and Asian teachers were half as likely to be head teachers and deputy head teachers as white teachers.

Mirza said: “It is not surprising that black people who feel that they will not be welcome in the profession or have a chance of success turn their backs on teaching.” It is claimed that at least 15-20% of teacher training places need to be taken up by black and ethnic minority trainees in the next two decades if the profession is to represent British society.

A Department for Education spokesperson said: “The number of teachers from black and minority ethnic backgrounds has risen year-on-year. In 2004, there were 43,600 teachers from minority backgrounds – and by 2012 this had risen by 13,400.”

A Send-Off for a Legendary Harlem Funeral Director