When Harlem Saved A King from BACKTRACK films on Vimeo.

Izola Ware Curry led a troubled life. Born into a meager existence in Adrian, Georgia in 1916, Izola’s life was a series of troubles. Her marriage was troubled. Her life was troubled. Her mind was troubled. Her mind in turmoil, her reasoning gone, she took a letter opener and plunged it into to the breast of Dr. Martin Luther King. She almost changed the face of America forever.
Izola Ware married James Curry. The couple lived in Savannah until the late thirties when they separated. Izola moved to New York City. She lived on the top floor of a tenement house at 121 W. 122nd Street in Harlem. She worked as a domestic, but in the fall of 1958, she was unemployed.
Izola’s mind, clouded with thoughts of fear, fear of a false enemy, began fail her. For five years, Izola feared the N.A.A.C.P.. She believed that the members of the organization were all Communists. She believed that they were conspiring to keep her from getting and keeping a job. “ They were making scurrilous remarks
about me,” she confessed. She couldn’t point to any specific person, but she was sure that they were after her. Izola moved from place to place to avoid what she saw as persecution. She believe that the N.A.A.C.P. and Dr. King were watching her every move. When the fear became unbearable, she bought a gun. 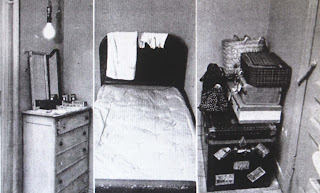 Izola left her apartment on Friday night to go to the movies. As she approached the intersection of 125th Street and 7th Avenue, Izola noticed a large crowd, which she described as a mob. She walked around them. She heard a band playing music. Someone in the crowd told her it was “this King man.” She didn’t  even know his first name: “Arthur or Lucer or something like that.” Izola continued on to the theater. She saw a Tarzan movie that night. Before returning home, Izola stopped by to see a friend she called “Smittie.” Despite telling police officers that she had known him for twenty years, Izola couldn’t remember his last name or very little about him.
Just before three o’clock on Saturday afternoon, September 20, 1958, Izola left her home. She went out to do some shopping. She wasn’t looking for anything in particular, just window shopping. She went inside Blumstein’s Department Store in Harlem, about four blocks from her home. She looked around for a while. Then she saw a crowd gathered around Dr. King, who was doing a book signing at Blumstein’s. His book, “Stride Toward Freedom,” was his account of the boycott he led of the Montgomery, Alabama bus system. Dr. King had been arrested seventeen days before the book signing for failing to obey a police officer. He was released a day later, when his fine was paid by the police commissioner. 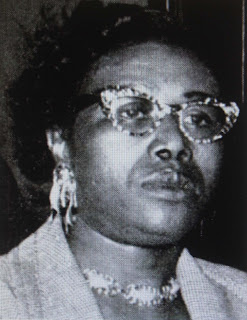 Izola told District Attorney Howard Jones, “ I walked up to him and I said to him, you have been annoying me a long time trying to get this children. I have no objection of you getting them in the schools at all, but why torture me? Why torture me? I’m no help to him by killing me. Don’t mean after all Congress is signing
anything. By torturing me, don’t mean Congress is going to sign. I can still get a blood clot from this aggravation today. After that day, Congress isn’t going to sign anything, and I’m just dead.” Her remarks reveal the irrational thoughts running through her mind. When the D.A. asked Izola what Dr. King’s response was, she responded, “ I was drunk in my head, and I don’t know what he said.”
Dr. King remembered Izola asking “Are you Martin Luther King?” “ I answered yes. I was looking down writing and the next minute I felt something sharp forcefully into my chest,” he recalled. Izola reached in her bag, took out a letter opener, closed her eyes, and plunged the opener into Dr. King’s chest. When  asked why, she told the D.A. “because after all if it wasn’t him, it would have been me. He was going to kill me,” Izola maintained.
Police officers grabbed Izola. Her bag and its contents fell out into the floor. Besides the usual contents of her purse, Izola also had a white bone handle automatic Italian pistol. She bought the gun in Daytona a year before for twenty-six dollars. She bought it, loaded it, and never took the gun out of her home until that
day. When asked why she took it out that day, Izola told the investigators, “I haven’t got a job and what in world I’m going to do for a living, with their pulling me off the job every day and I’m trying to work and they’re trying to force me to make me drop my head to drink either become a prostitute, and I’m not either one. I was going to protect myself if some of these members attack me. Because I know his members
are you know, following him.” She figured there would be trouble that day, that King or his followers would bother her as they had done before. Mrs. Curry told investigators that she had been to the police precinct on six occasions and had reported her concerns to the F.B.I. and President Eisenhower. She sought restraining orders against people whom she thought were out to get her.
Dr. Theodore Weiss and Dr. John H. Cassity, both qualified psychiatrists, examined Izola. They found her to be a paranoid schizophrenic and consequently incapable of understanding the charges pending against her. Most disturbing to the doctors were signs of confusion, giving irrelevant answers to direct questions. The
doctors reported that the patient fluctuated between occasional fairly logical thinking and very confused illogical thinking.
Dr. King was rushed to Harlem Hospital. From his hospital room three days after he was stabbed, Dr. King issued a statement which harbored no ill will against Mrs. Curry. He hoped that she would get help. He thanked government officials, church leaders, and the thousands of people who sent flowers, cards, and letters. 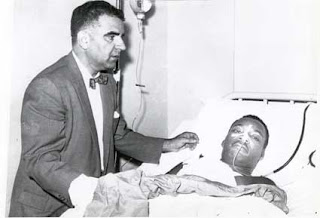 Dr. Martin Luther King, Jr. recovering in a hospital after an attack on his life.
King saw the event not as an attack on one man, but as an attack of hatred. Before doctors could remove the letter opener could be removed, surgeons studied their options. The dagger had stopped on the surface of King’s aorta. Doctor’s decided to open King’s chest to remove the weapon. Any sneeze may have caused a cut in the aorta and endangered his life. The operation was successful.

Dr. King recovered and went on the lead the Civil Rights Movement for nearly a decade. Invariably the question arises: “What if?” What if Izola had used her loaded pistol? What if Izola had thrust her dagger a little harder? What if Dr. King had died? There would have no March on Washington, no “I Have a Dream” speech, no Selma to Montgomery march. The speculations can be mind boggling. Even Dr. King reflected back on the events of the day and wondered what might have not happened. Izola Curry was committed to the Mattewaan Hospital for the criminally insane for the rest of her life.
To this day few people, if any, know of the whereabouts of Izola Curry, of even if she is alive.   Surprisingly, the entire event never happened in the eyes of curious journalists who would have ordinarily cover the case in great detail.  Few, if any, photographs of Izola Ware Curry exist.
Photos @ Jet Magazine

University of Alabama Sorority Exposes Its Rejection of Black Candidate