By Ami Eden · April 9, 2013
NEW YORK (JTA) — Moviegoers who head this weekend to the AMC Magic Johnson Harlem 9 for the opening of “42” will see the story of how Jackie Robinson displayed legendary courage, class and talent in the face of immense pressure and racial hatred as he broke down baseball’s color barrier.
Less well known is Robinson’s role in a controversy that erupted just a few blocks away, at Harlem’s most famous theater, and underscored his commitment to fighting all bigotry, including prejudice emanating from his own community.
It was 1962, a decade-and-a-half after Robinson first took the field for the Brooklyn Dodgers and just a few years after he retired. Day after day, an angry crowd marched outside Harlem’s legendary Apollo Theater protesting against its Jewish owner, Frank Schiffman, and his plan to open a low-cost restaurant with prices that potentially would threaten the business of a more expensive black-owned eatery. 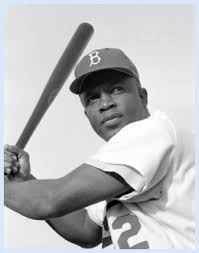 The demonstrators carried anti-Semitic posters and hurled racial epithets, reportedly denouncing Schiffman as a Shylock who wanted to extract a pound of flesh from the black community.
Schiffman turned to several black leaders for help, but despite the increasingly hostile acts of anti-Semitism that were taking place, they all remained silent — except for Robinson.
“I was ashamed to see community leaders who were afraid to speak out when blacks were guilty of anti-Semitism,” Robinson wrote in his 1972 autobiography, “I Never Had It Made. “How could we stand against anti-black prejudice if we were willing to practice or condone a similar intolerance?”
Never one to back down from a cause he believed in, Robinson used his syndicated newspaper column to condemn the protesters’ blatant use of anti-Semitism and compared their actions to events that had occurred in Nazi Germany, drawing the ire of many black nationalists in the process.
The nationalists, who had adopted a separatist agenda, retaliated by protesting in front of a nearby Chock Full O’ Nuts coffee shop — Robinson had worked for the chain after his 1957 retirement from baseball — and outside a dinner honoring Robinson’s induction into the Baseball Hall of Fame.
In turn, several mainstream black leaders — including Roy Wilkins, the longtime leader of the NAACP — quickly came to the defense of Robinson and Schiffman.

“In their fight for equal opportunity, Negroes cannot use the slimy tools of anti-Semitism or indulge in racism, the very tactics against which we cry out,” Wilkins wrote in a telegram to Robinson. “We join you in your straight statement that this is a matter of principle from which there can be no retreat.”
Other leaders, including the Rev. Martin Luther King Jr. and Philadelphia Tribune publisher Dr. E. Washington Rhodes, also offered their support, according to Robinson. Major League Baseball’s first black player also managed to pry a condemnation of anti-Semitism from Lewis Micheaux, the owner of Harlem’s National Memorial African Book Store, though Micheaux had sympathized with the marchers and denounced Robinson’s initial criticisms.
Soon after, the protests ceased.
Some Jewish communal officials have noted that Robinson’s strong stance during the 1962 Apollo incident stood in stark contrast to the silence from black leaders during the 1995 protests outside Freddy’s clothing store on 125th Street.
For months, large crowds gathered in front of the Harlem store to protest the efforts of its Jewish owner, Fred Harari, to expand into an adjacent storefront that was occupied by a black-owned business.
The condemnations came only after one protester, Roland Smith Jr., shot and killed seven store employees before burning down the building and taking his own life.
Robinson was always quick to criticize anti-Semitism in the black community, according to Stephen Norwood, a professor at the University of Oklahoma who co-wrote a scholarly article on Robinson’s relationship with Jews.
In a 1997 interview timed to the 50th anniversary of Robinson’s integration of baseball, Norwood pointed out that Robinson was the first to condemn and call for
the removal of a Congress of Racial Equality official in 1966 after he shouted at a group of Jews, “Hitler made a mistake when he didn’t kill enough of you.”
While raising funds for the NAACP and bail money for imprisoned civil-rights marchers, Norwood said, Robinson witnessed the valuable contributions that Jews were making to the black community’s struggle. When Robinson took part in the legendary march on Washington and stood by King in Birmingham, Ala., he saw that some Jews also were placing their bodies on the line for civil-rights causes.
According to Norwood, when black nationalism emerged as a powerful force during the 1960s, Robinson rejected its separatist agenda and continued to include Jews in his major efforts to economically empower the black community with the Freedom National Bank and the Jackie Robinson Construction Company.
Roger Kahn, whose “Boys of Summer” chronicled Robinson and his teammates’ multi-year road to winning the World Series in 1955, would write later that Robinson’s actions during the Apollo protests should not have come as a surprise.
“He hated anti-Semitism just as he hated prejudice against blacks,” Kahn wrote. “Without qualification and from the gut.”
(This piece was adapted from an article that first appeared in The Jewish Exponent.)