By ALLAN KOZINN
Published: February 9, 2013
Even in the motorized wheelchair he rode to the podium, or seated on the low swivel chair from which he conducted, James DePreist cut an imposing figure, one that usually got the best from the orchestras he led — whether major ensembles like the New York Philharmonic and the Oregon Symphony, or student groups at the Juilliard School, where he was director of conducting and orchestral studies for seven years.
Tall and heavyset, with a shaved head, a trim mustache and a beard that grayed in recent years, Mr. DePreist, who died on Friday at 76, was one of the few black conductors to achieve international renown. And he refused to let disability derail his career; he went on conducting after polio, contracted in 1962, left both legs paralyzed and forced him to use the wheelchair.
Two years later, he won the gold medal in the Dmitri Mitropoulos International Conducting Competition, and in 1965 he became an assistant conductor to Leonard Bernstein at the New York Philharmonic. 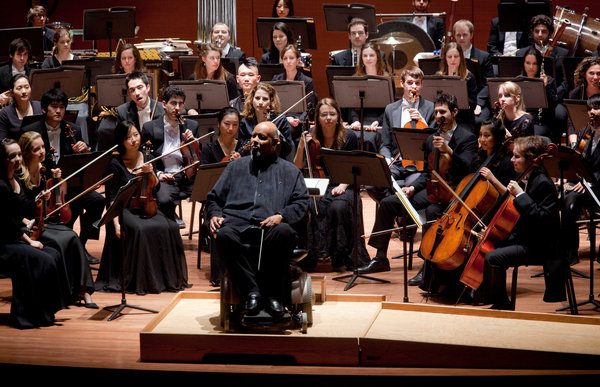 James DePreist at the Juilliard Symphony in 2008.

Though he was reluctant to be seen as a role model on the basis of his race, rather than purely for his musical accomplishments, he still understood, he said, that young black musicians regarded him as a role model, much as they had revered his aunt, the great contralto Marian Anderson, who was the first black singer to perform at the Metropolitan Opera. It was a responsibility he took seriously, he said. In 1997, he appeared in “My Country,” an hourlong documentary on PBS in which he drew comparisons between racial barriers and the challenges faced by people with disabilities.
Mr. DePreist objected, however, to outreach programs that seemed to patronize black audiences. When he was engaged by the New York Philharmonic in 1988 to lead a performance at the Apollo Theater in Harlem with the Boys Choir of Harlem and the Modern Jazz Quartet, he made a point of saying that he would not have agreed to participate had he not already been contracted for two weeks of subscription programs with the orchestra at Lincoln Center, in Avery Fisher Hall.
“I think if I’m seen as a role model, I would like it to be for conducting the subscription weeks, and not just the concert at the Apollo,” he said at the time. “I do not believe in engaging black artists and doing black music in black areas, because I feel that it is misleading, the worst kind of tokenism, especially if it’s the only time you see black artists or hear works by black composers.”
Mr. DePreist died at his home in Scottsdale, Ariz., his manager, Jason Bagdade, said. His wife, Ginette DePreist, told the newspaper The Oregonian that he had been in and out of the hospital since having a heart attack last March followed by open-heart surgery. He had also undergone a kidney transplant in 2001. 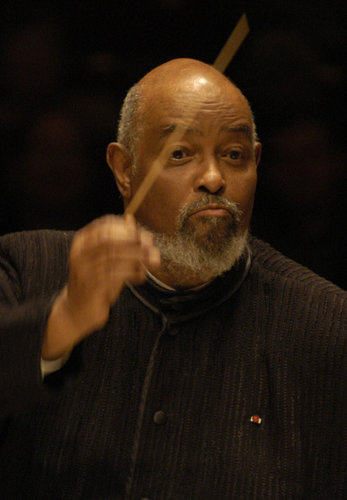 James Anderson DePreist was born on Nov. 21, 1936, in Philadelphia, completed his bachelor’s and master’s degrees at the University of Pennsylvania and studied composition with Vincent Persichetti at the Philadelphia Conservatory as well as conducting. It was on a State Department-sponsored Asian tour in 1962 that Mr. DePreist, in his mid-20s at the time, contracted polio while conducting an orchestra in Bangkok. While being treated he spent several months studying scores in preparation for the 1963 Dmitri Mitropoulos International Conducting Competition.
During the competition, “the other candidates looked at me in braces and on crutches and thought, ‘Well, we can write him off,’ ” Mr. DePreist recalled in an interview with The New York Times in 1987. But he recovered enough to reach the semifinals. The next year, he won.
His victory brought him to the attention of Leonard Bernstein, who took him on as an assistant at the New York Philharmonic for the 1965-66 season. Two seasons conducting a youth orchestra in Westchester County, N.Y., followed.
Mr. DePreist moved to the Netherlands in 1967 and, two years later, made a triumphant European conducting debut with the Rotterdam Philharmonic. It opened doors, and in 1971 the conductor Antal Dorati appointed him associate conductor of the National Symphony Orchestra in Washington, a position Mr. DePreist held until 1974.

He soon began a guest-conducting career that took him to the Cleveland Orchestra, the Chicago Symphony Orchestra, the Philadelphia Orchestra, the Boston Symphony Orchestra, the Los Angeles Philharmonic and the San Francisco Symphony. For the 1975-76 season he returned to the National Symphony as principal guest conductor.
He conducted orchestras in a host of European cities, including Amsterdam, Berlin, Budapest, Copenhagen, Prague, Rome, Stockholm and Vienna. He also led performances in Seoul, Sydney and Tel Aviv.
After he left the National Symphony, Mr. DePreist became music director of the Quebec Symphony Orchestra, a position he held from 1976 to 1983. But he became best known for his work with the Oregon Symphony, which he directed from 1980.
During his nearly quarter-century tenure in Portland, he transformed the orchestra from a good regional group to an esteemed one that won a following through more than a dozen recordings on the Delos label that Mr. DePreist made at its helm; among them were Stravinsky’s “Rite of Spring” and “Firebird” Suite and Rachmaninoff’s Symphony No. 2.
Mr. DePreist made recordings with many other orchestras, including the Chicago Symphony, the Los Angeles Chamber Orchestra, the Royal Philharmonic, the Malmo Symphony Orchestra in Sweden, of which he was principal conductor from 1991 to 1994, and the Monte Carlo Philharmonic, which he directed from 1994 to 1998.

After leaving the Oregon Symphony in 2003, he became its laureate music director and moved to New York to join Juilliard. His concerts with its ensembles at Carnegie Hall and elsewhere were highlights of the school’s performance season. He left the conducting and orchestral studies directorship in 2011, turning it over to Alan Gilbert, the music director of the New York Philharmonic, but retained his association as director emeritus.
From 2005 to 2008 Mr. DePreist was the permanent conductor of the Tokyo Metropolitan Symphony Orchestra. A character in “Nodame Cantabile,” a popular Japanese cartoon series, was based on Mr. DePreist (and bore his name). The character directed a fictional orchestra in Paris. Mr. DePreist conducted the soundtrack recordings for the live-action and animé adaptations of the story in 2009.
He also published two books of poetry and received numerous honors, including the National Medal of Arts, bestowed by President George W. Bush in 2005.
Besides his wife, he is survived by two daughters, Tracy and Jennifer, from his first marriage, to Betty Childress, and two grandchildren.
Mr. DePreist saw music as presenting “a mirror of our better selves,” he told the broadcaster Bruce Duffie in an interview in 1988 — “as something to which we can relate on a very personal and emotional level.”
“We can admire it architecturally,” he added. “We can admire it in terms of its harmonic structure. But fundamentally there is a visceral reaction, and that visceral reaction is sheer magic. There’s no two ways about it.”