Jay Z said that he never supported the Occupy Wall Street movement because he thought that the group had too many issues and not enough direction.

The rapper’s criticism of the political protests seems particularly striking considering he briefly sold t-shirts that played on the cause’s name but didn’t donate anything back to the organizers.

In an interview with British author Zadie Smith for The New York Times, the rapper said that he never supported the wealth inequality protests in spite of his attempts to cash in on their popularity. 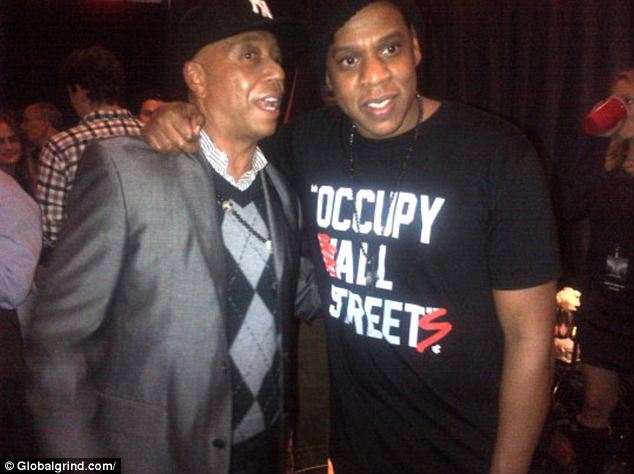 Empty message: Though he changed the t-shirts so they read ‘Occupy All Streets’ many criticized Jay Z (right, seen with Occupy-supporter Russell Simmons, left) for not donating any of the profits back to the movement

He said that after producer Russell Simmons, who was an ardent Occupy-supporter, called him to enlist ‘Hova’ to make an appearance at the protest tent grounds, he rejected the offer on the grounds that he didn’t know what the movement was about.

‘I’m not going to a park and picnic, I have no idea what to do, I don’t know what the fight is about. What do we want, do you know?’ he supposedly told Simmons at the time.

During The Times interview, the rapper whose real name is Shawn Carter, said that once he got a sense of what the Occupy movement stood for, he took issue with the portion of their argument that derides the success of the wealthy ‘1 percenters’.

‘I think all those things need to really declare themselves a bit more clearly. Because when you just say that “the 1 per cent is that,” that’s not true,’ he said.

‘Yeah, the 1 per cent that’s robbing people, and deceiving people, these fixed mortgages and all these things, and then taking their home away from them, that’s criminal, that’s bad. Not being an entrepreneur. This is free enterprise. This is what America is built on.’

Considering Jay Z has worked his way up from living in poverty and working as a drug dealer to accruing an estimated personal wealth of $460million, it comes as no surprise that he takes issue with slamming of the self-made-man. 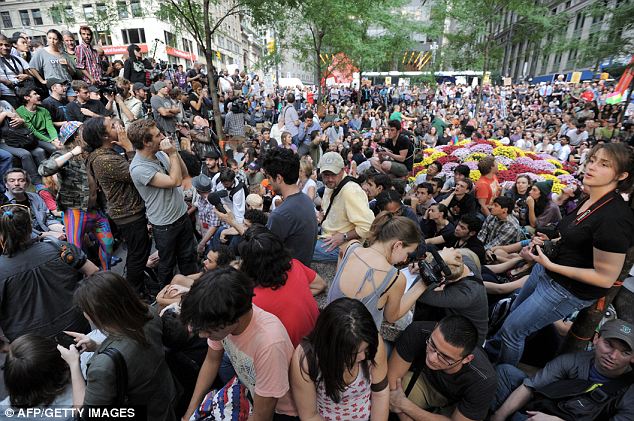 99 problems: The rapper said that the protesters didn’t specify their cause enough to make an impact

This is not the first run-in that Jay Z had with the movement as his clothing company Roc A Wear had to stop selling his t-shirts that played off the protest’s name and changed it to read ‘Occupy All Streets’ once they received bad publicity after he admitted that there were no plans to donate any of the proceeds to the associated group.

When they were sold, the cotton t-shirts were going for $22 each.

At the time, TMZ spoke with an Occupy leader identified only as Grim who said: ‘Jay-Z, as talented as he is, has the political sensibility of a hood rat and is a scrotum.’

‘To attempt to profit off of the first important social moment of 50 years with an overpriced piece of cotton is an insult to the fight for economic civil rights known as #occupywallstreet.’