By MARGALIT FOX
Published: January 3, 2013
Jayne Cortez, a poet and performance artist whose work was known for its visceral power, its political outrage and above all its sheer, propulsive musicality, died on Dec. 28 in Manhattan. She was 78.
Her death, at Beth Israel Medical Center, was from heart failure, her son, the jazz drummer Denardo Coleman, said.
One of the central figures of the Black Arts Movement — the cultural branch of the black power movement that flourished in the 1960s and ’70s — Ms. Cortez remained active for decades afterward, publishing a dozen volumes of poetry and releasing almost as many recordings, on which her verse was seamlessly combined with avant-garde music.
She performed on prominent stages around the world, including, in New York, the Schomburg Center for Research in Black Culture, the Museum of Modern Art and Carnegie Hall.
Ms. Cortez’s work was beyond category by virtue of embodying so many categories simultaneously: written verse, African and African-American oral tradition, the discourse of political protest, and jazz and blues. Meant for the ear even more than for the eye, her words combine a hurtling immediacy with an incantatory orality.
Starting in the 1960s, Ms. Cortez began performing her work to musical accompaniment. For the past three decades she toured and recorded with her own band, the Firespitters, whose members include her son, from her first marriage, to the saxophonist and composer Ornette Coleman. 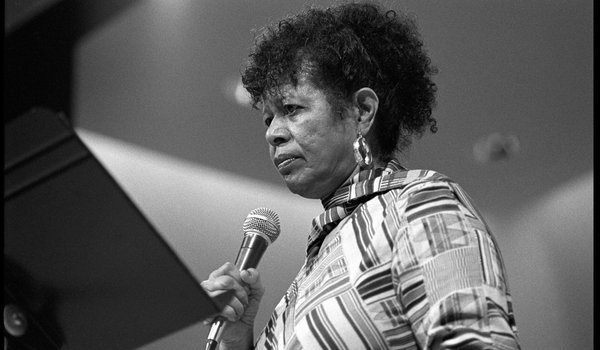 Jayne Cortez performing in New York in 1994. Her work was known for its power and outrage.

As performed, Ms. Cortez’s poems were not so much set to music as they were a part of the music. They were chanted more than recited, employing carefully calibrated repetitions, shifts in tempo and modulations of vocal tone.
It was as if her verse, which often took on large, painful subjects like racism and misogyny, had become an instrument itself — an instrument, Ms. Cortez felt strongly, to be wielded in the service of social change.
In one of her best-known works, “If the Drum Is a Woman,” for instance, she indicts violence against women. (The title invokes Duke Ellington’s 1956 composition “A Drum Is a Woman”):
why are you pounding your drum into an insane babble
why are you pistol-whipping your drum at dawn
why are you shooting through the head of your drum
and making a drum tragedy of drums
if the drum is a woman
don’t abuse your drum don’t abuse your drum
don’t abuse your drum
Sallie Jayne Richardson, always called Jayne, was born on the Army base at Fort Huachuca, Ariz., on May 10, 1934. (The year of her birth is often misreported as 1936.) Her father was a career soldier who would serve in both world wars; her mother was a secretary.
Reared in Los Angeles, young Jayne Richardson reveled in the jazz and Latin recordings that her parents collected. She studied art, music and drama in high school and later attended Compton Community College. She took the surname Cortez, the maiden name of her maternal grandmother, early in her artistic career.
In the summers of 1963 and 1964, Ms. Cortez worked with the Student Nonviolent Coordinating Committee, registering black voters in Mississippi. It was this work as much as anything, she later said, that caused her to regard art and political action as an indivisible whole.
She gave her first public poetry readings with the Watts Repertory Theater Company, a Los Angeles ensemble she founded in 1964. Ms. Cortez, who had homes in Manhattan and Dakar, Senegal, was also a founder of the Organization of Women Writers of Africa, established in 1991.
Ms. Cortez’s marriage to Mr. Coleman ended in divorce in 1964, after 10 years. Besides her son, she is survived by her second husband, Melvin Edwards, a prominent sculptor whom she married in 1975; a sister, Shawn Smith; three stepdaughters, Ana, Margit and Allma Edwards; and a grandson.
Her volumes of poetry, many illustrated by Mr. Edwards, include “Festivals and Funerals” (1971), “Coagulations” (1984) and “Jazz Fan Looks Back” (2002); her albums include “Everywhere Drums” (1990) and “Taking the Blues Back Home” (1996).
Ms. Cortez, who taught at universities throughout the United States, including Rutgers, was among the artists featured — others include Amiri Baraka, Charles Bukowski, John Cage and Allen Ginsberg — in Ron Mann’s esteemed 1982 documentary film, “Poetry in Motion.”
Despite her work’s eclecticism, Ms. Cortez was comfortable invoking a single genre to describe it, precisely because that genre was itself so encompassing.
“Jazz isn’t just one type of music, it’s an umbrella that covers the history of black people from African drumming to field hollers and the blues,” she told The Weekly Journal, a black newspaper in Britain, in 1997. “In the sense that I also try to reflect the fullness of the black experience, I’m very much a jazz poet.”