A  man enraged with jealousy who kidnapped and waterboarded his girlfriend with root beer has been jailed for life.

The victim said that it was the most horrific night of her life as the man poured root beer in her nose and mouth, choking her, pointing a gun at her eye and threatening to kill her while her children were in another part of the house.

Major Harris III, 32, attacked the woman in Palm Coast, Florida after she refused to tell him where she had been that day in November 2010. 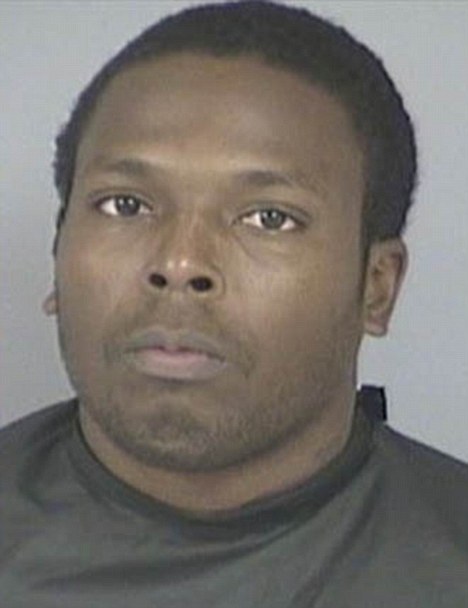 Major Harris III who attacked his girlfriend was jailed for life

The victim broke down as she recounted the attack and the fear she held for her children at the sentencing hearing in August.

According to The Daytona Beach News-Journal she said: ‘On the night that this occurred, it had to be one of the most horrific nights of my life and most people think it was because I had a gun pointed at my face but it wasn’t.

Judge Zambrano said: ‘You terrorised a human being by using a weapon and pointing that weapon at that human being and that, in and of itself, will cause harm.

‘It doesn’t require somebody to go to the hospital or somebody to get shot, but it will cause enough fear in a human being that probably could scar them for life.

‘You escalated the situation based upon your feelings of jealousy or wanting to be in control of another human being, but our society does not tolerate that type of behaviour. Your actions do warrant a very stiff punishment.’

Waterboarding involves simulating the sensation of drowning before bringing one back from the brink.

The controversial torture technique has allegedly been used by the U.S. against terror suspects including Khalid Sheikh Mohammed, the man who is believed to have planned and executed the attacks on the World Trade Center with four others. 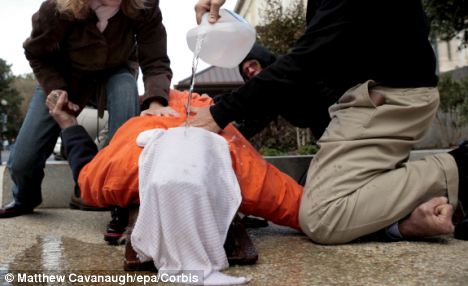 Torture technique: Harris pinned his victim to the ground, choking her as he poured root beer down her nose and throat, a controversial technique called waterboarding as simulated here

Harris said he ‘forgave’ the victim in a statement in court before the judge sentenced him.

Harris said: ‘First off, addressing the alleged victim, we both know what took place that night. As far as my behalf, you know, I apologise for what took place.

‘You know, I’ve been praying about the situation and, you know, I forgive her as well, too.’

He then proclaimed his innocence to Judge Zambrano.

He said: ‘With all due respect, sir, I understand the jury has in fact found me guilty of the alleged charges although my innocence still remains… so regardless of the years you sentenced me to, I ask sir that you consider the fact that nobody was actually harmed or hospitalised.

‘I also feel that my character was truly assassinated by the prosecutor and most definitely by the media, of which I know you have no control over.’

Harris has previously served jail time for various offences including aggravated battery on a pregnant woman, depositing cheques with the intent to defraud, aggravated battery with a deadly weapon and possession of a controlled substance.