By BRUCE WEBER
Published: December 16, 2012
Jeni LeGon, a singer and tap dancer who hoofed her way from the South Side of Chicago to Hollywood, where she shared the screen with Bill Bojangles Robinson and Cab Calloway, and to Broadway, where she performed to the music of Fats Waller, died on Dec. 7 in Vancouver, British Columbia. She was 96.
Her death was confirmed by her longtime companion, Frank Clavin.
Ms. LeGon was the rare female tapper who distinguished herself as a solo performer in the first half of the 20th century. She wore pants rather than skirts when she performed, and, somewhat as a result, she developed an athletic, acrobatic style, employing mule kicks and flying splits, more in the manner of the male dancers of the time.
“I danced like the boys,” she recalled in an interview with The Globe and Mail of Toronto in 2009. “I could do the girls’ splits, but I used the boys’ splits because you could get up faster.”
In 1935 Ms. LeGon appeared in “Hooray for Love,” an MGM musical starring Ann Sothern in which she was featured with Robinson and Waller in an effervescent song-and-dance number, “I’m Livin’ in a Great Big Way.” For a time she performed in London, and she went on to dance, sing and act in some 20 movies, including “Ali Baba Goes to Town” (1937), with Eddie Cantor; “Stormy Weather,” (1943), with Lena Horne and Robinson; and “Hi-De-Ho” (1947), in which she died in Calloway’s arms.
She also danced on Broadway in “Early to Bed,” a 1943 musical comedy with a mediocre book — it concerned a brothel masquerading as a girls’ school on the island of Martinique — that was raised to distinction by Waller’s score and the choreography of Robert Alton. 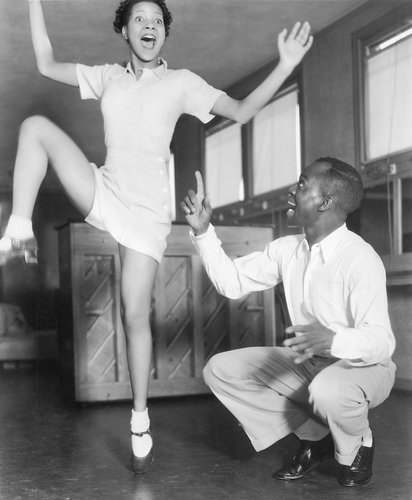 On television in the early 1950s, Ms. LeGon appeared several times on “Amos ’n’ Andy,” but over all her career was stymied by the racial bias that governed Hollywood for much of its history. She remained angry for decades at Fred Astaire, with whom she shared rehearsal space in 1935 but who she said refused to acknowledge her on the set of “Easter Parade” (1948), one of many films in which she played a maid.
“I played every kind of maid, that’s all I ever did,” she said in an interview with the Web site tapheritage.org. “I was an East Indian, West Indian, African, Arabic, Caribbean and black American. Eventually there weren’t that many roles. They were too few and far between.”
Jennie Ligon was born in Chicago on Aug. 14, 1916, not long after her parents, Hector and Harriett Ligon, migrated from Georgia. (Her name was later altered forever when Louella Parsons misspelled it in her Hollywood gossip column.)
As a girl Ms. LeGon sang and danced with neighborhood bands, and at 13 she got her first job as a chorus-line dancer for a performance by the Count Basie Orchestra. She was so slender, however, that there were no costumes to fit her, so she wore pants and was assigned to mug flirtatiously in front of the chorus.
Later she toured with the vaudeville dance troupe the Whitman Sisters, a job that took her to Los Angeles and the movies. She also toured as a dancer, performing on military bases and in clubs. In the 1950s and ’60s she taught dance in Los Angeles and founded a touring troupe, Jazz Caribe. She continued teaching after she moved to Vancouver in 1969.
Ms. LeGon’s brief early marriage to the composer and arranger Phil Moore ended in divorce. She met Mr. Clavin, a jazz drummer, in 1977. He is her only immediate survivor.