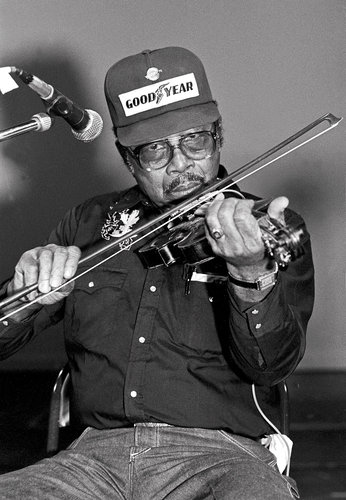 Joe Thompson, a fiddle player, is credited with preserving the black string band.

“I got the name of being a pretty good fiddle player,” Joe Thompson once said. “I even been to Carnegie Hall playing fiddle.”

He also played at the Kennedy Center in Washington and at folk festivals from coast to coast, including one at the Smithsonian. The National Endowment for the Arts awarded him a National Heritage Fellowship. And he is credited with helping to keep alive an African-American musical tradition — the black string band — that predates the blues and influenced country music and bluegrass.

Yet until 1973, when he was in his mid 50s, not many people outside North Carolina had ever heard him play.

Mr. Thompson always said death would come when “the good Lord sends the morning train,” and the train arrived on Feb. 20. He died at 93 in a nursing home in Burlington, N.C., said Larry Vellani, a musician and a friend of Mr. Thompson’s.

He was born not far from there, in north-central North Carolina, and one of his earliest memories was of squirming on the floor as his father played the fiddle, according to an account given to the North Carolina Folk Heritage Award Program. His father had learned the instrument from his own father, a slave, and taught him in turn. Joe Thompson made the strings for his first fiddle from screen-door wires, and by the time he was 7, he was playing a real fiddle at dances while propped on a wooden chair, his feet not yet reaching the floor.

Later on he and his brother Nate and a first cousin, Odell Thompson, formed a string band, with Nate and Odell on banjos, and well into their teens they played their music — something like square dance music, only more rhythmic — all over North Carolina.

“People loved to see us come,” Mr. Thompson said in an interview with American Legacy magazine in 2008. “Every year we would shuck corn and strip tobacco, then hoop it up with a big dance.”

Then came World War II, and Mr. Thompson, entered the Army, serving in a segregated unit in Europe driving a bulldozer. After the war, fiddling became less and less a part of his life. By the postwar years, black string bands were, at most, a local hobby. Mr. Thompson bought a four-room house on an unpaved country road and began a 38-year stint working in a furniture factory.

That was where he was in 1973, Mr. Vellani said, running a rip saw, when Kip Lornell, then a graduate student in ethnomusicology, decided to check out rumors that some masters of the old-time string-band music were still around. Stopping by Mr. Thompson’s house, he heard him and his cousin play — his brother had moved to Philadelphia by then — and urged them to look into performing at folk music festivals that were springing up.

They did, and soon they were invited to perform across the country, from Massachusetts to Washington State. They played in Australia. In 1989, they recorded “Old-Time Music from the North Carolina Piedmont” for the Global Village label. The musical folklorist Alan Lomax included the three Thompsons in his American Patchwork documentary film series. And in 1990 Joe and Odell Thompson were onstage at Carnegie Hall as part of its Folk Masters program.

Mr. Thompson was in fine fettle. “Holding his bow about five inches from the end, Joe Thompson draws a scratchy, rakish tone from his fiddle, full of higher overtones,” Jon Pareles wrote of the performance in The New York Times. “He breaks melodies into short phrases and often adds double-stops that suggest modal harmonies.”

After Odell Thompson died in car accident in 1994, Joe almost quit. But he went on to record a solo album, “Family Tradition,” on the Rounder label in 1999. He received the National Endowment for the Arts fellowship in 2007 and performed that year at the Kennedy Center for the Performing Arts in Washington.

String-band music, which combines fiddle, banjo and sometimes other instruments, owes much to African-American traditions. Banjos originally came from Africa, and though violins are European in origin, slaves were taught to play them for their masters as early as the 17th century. Paul F. Wells a former president of the Society for American Music, wrote in the Black Music Research Journal that slaves were most likely the earliest musicians to combine violin and banjo.

In the 19th century, both whites and blacks — sometimes separately, sometimes together, as in Mr. Thompson’s Piedmont region — created the exuberant music that both black and white string bands played, the white bands at square dances and the black bands at their own dances, called “frolics.”

But there were differences. Black fiddlers played in a style that was more rhythmic, syncopated and African in character, and called the tunes “Negro jigs.” As music became more commonly recorded in the 1920s, the black string-band tradition receded. Black music was veering toward the blues, while white string bands were categorized as “hillbilly,” playing music that is acknowledged to be the precursor of today’s bluegrass and country music. The influence of black string bands on white country musicians slipped from memory.

As if this slight wasn’t enough, Mr. Thompson complained in a 2004 interview with a North Carolina newspaper that when Elvis Presley started singing the blues, “people thought that was white people’s music, too.”

“That messes black people up,” he said.

Joseph Aquilla Thompson was born on Dec. 9, 1918, on a farm near Mebane, N.C., where he lived most of his life. Mr. Vellani said in an interview that a stroke Mr. Thompson had in 2001 had hurt his fiddling but not his strong singing voice.

The Thompsons may have been the last black string band still active, said Wayne Martin, folklife director for the North Carolina Arts Council. But Mr. Thompson planted a seed for the future. In 2005, three young musicians started coming to his house every Thursday to learn the old ways. They formed a band, the Carolina Chocolate Drops, “mostly as a tribute to Joe,” they said. Their 2010 album, “Genuine Negro Jig,” won aGrammy for best traditional folk album.

“He lived long enough for people to get what it was he had to share,” Mr. Vellani said.