Juneteenth, also known as Freedom Day or Emancipation Day, is a holiday in the United States honoring African American heritage by commemorating the announcement of the abolitionof slavery in the U.S. State of Texas in 1865. Celebrated on June 19, the term is a portmanteau of June and nineteenth, and is recognized as a state holiday or state holiday observance in 41 states of the United States.

The state of Texas is widely considered the first U.S. state to begin Juneteenth celebrations with informal observances taking place for over a century; it has been an official state holiday since 1890. It is considered a “partial staffing holiday”, meaning that state offices do not close, but some employees will be using a floating holiday to take the day off. Schools are not closed, but most public schools in Texas are already into summer vacation by June 19th. Its observance has spread to many other states, with a few celebrations even taking place in other countries. 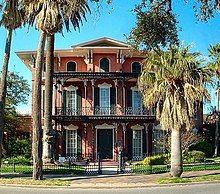 Ashton Villa, from whose front balcony the Emancipation Proclamation was read on June 19, 1865.

Though Abraham Lincoln issued the Emancipation Proclamationon September 22, 1862, with an effective date of January 1, 1863, it had minimal immediate effect on most slaves’ day-to-day lives, particularly in the Confederate States of America. Many liberated slaves died during emancipation as a result of the illness that devastated army regiments. Freed slaves suffered from smallpox, yellow fever, and malnutrition.   Texas, as a part of the Confederacy, was resistant to the Emancipation Proclamation. Juneteenth commemorates June 18 and 19, 1865. June 18 is the day Union General Gordon Granger and 2,000 federal troops arrived in Galveston, Texas, to take possession of the state and enforce the emancipation of its slaves. On June 19, 1865, legend has it while standing on the balcony of Galveston’s Ashton Villa, Granger read the contents of “General Order No. 3”:

The people of Texas are informed that, in accordance with a proclamation from the Executive of the United States, all slaves are free. This involves an absolute equality of personal rights and rights of property between former masters and slaves, and the connection heretofore existing between them becomes that between employer and hired labor. The freedmen are advised to remain quietly at their present homes and work for wages. They are informed that they will not be allowed to collect at military posts and that they will not be supported in idleness either there or elsewhere.

That day has since become known as Juneteenth, a name coming from a portmanteau of the words June andteenth like nineteenth and other numbers ending with -teenth.

Former slaves in Galveston rejoiced in the streets with jubilant celebrations. Juneteenth celebrations began in Texas the following year.  Across many parts of Texas, freed people pooled their funds to purchase land specifically for their communities and increasingly large Juneteenth gatherings — including Houston’s Emancipation Park, Mexia’s Booker T. Washington Park, and Emancipation Park in Austin.

Ralph Ellison’s second novel Juneteenth deals with this holiday and its traditions. Juneteenth was published posthumously.
Carolyn Meyer’s novel Jubilee Journey is the story of one young biracial girl celebrating Juneteenth with her relatives in Texas, while also learning to be proud of her African American heritage.
Ann Rinaldi’s historical novel Come Juneteenth is the story of how Juneteenth came to be, and follows the life of a plantation-owner’s young, white daughter in Texas during the Civil War whose family faces tragedy after her mulatto half-sister runs away when learning she was lied to about being free. 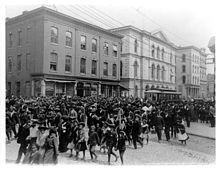 Traditions include an enunciated public reading of the Emancipation Proclamation as a reminder that the slaves have been proclaimed free. The events are celebratory and festive. Many African American families use this opportunity to retrace their ancestry to the ancestors who were held in bondage for centuries, exchange artifacts, debunk family myths, and stress responsibility and striving to be the best you can be. Celebrants often sing traditional songs as well such as Swing Low, Sweet Chariot; Lift Every Voice and Sing; and poetry from black authors like Maya Angelou.  Juneteenth celebrations also include a wide range of festivities to celebrate American heritage, such as parades, rodeos, street fairs, cookouts, family reunions, or park parties that include such things as African American music and dancing or contests of physical strength and intellect. Some of the events may include black cowboys, historical reenactments, or Miss Juneteenth contests. Traditional American sports may also be played such as baseball, football, or basketball tournaments.

Juneteenth is the oldest known celebration commemorating the ending of slavery in the United States and has been an African American tradition since the late 19th century.  Economic and cultural forces caused a decline in Juneteenth celebrations beginning in the early 20th century. The Depression forced many blacks off farms and into the cities to find work. In these urban environments, employers were less eager to grant leaves to celebrate this date. July 4 was the already established Independence Day holiday, and a rise in patriotism among black Americans steered more toward this celebration.
The Civil Rights movement of the 1950s and 1960s yielded both positive and negative results for the Juneteenth celebrations. While it pulled many of the African American youth away and into the struggle for racial equality, many linked these struggles to the historical struggles of their ancestors.
Again in 1968, Juneteenth received another strong resurgence through Poor Peoples March to Washington D.C. Rev. Ralph Abernathy’s call for people of all races, creeds, economic levels and professions to come to Washington to show support for the poor. Many of these attendees returned home and initiated Juneteenth celebrations in areas previously absent of such activity. Throughout the 1980s and 1990s Juneteenth continued to enjoy a growing interest from communities and organizations throughout the country as African Americans have an interest to see that the events of 1865 in Texas are not forgotten. Many see roots tying back to Texas soil from which all remaining American slaves were finally granted their freedom.

Most recently in 1994, the era of the “Modern Juneteenth Movement” began when a group of Juneteenth leaders from across the country gathered in New Orleans, Louisiana, at Christian Unity Baptist Church to work for greater national recognition of Juneteenth. The meeting was convened by Rev. John Mosley, director of the New Orleans Juneteenth Freedom Celebration.

The “Modern Juneteenth Movement” continues to work to pass legislation in the U.S. congress to establish Juneteenth Independence Day a National Day of Observance.