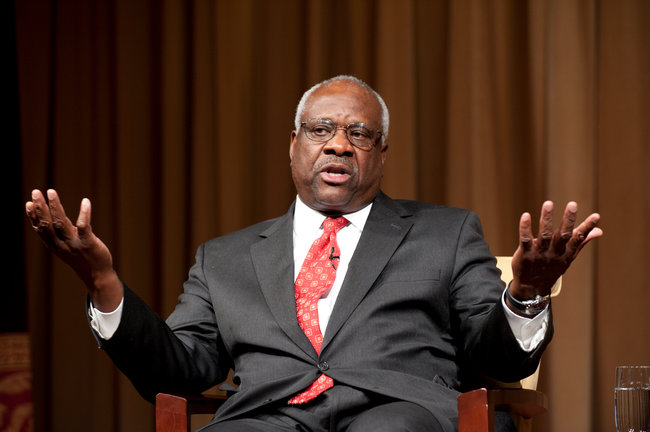 WASHINGTON — Justice Clarence Thomas has not asked a question from the bench in more than six years, and he seldom appears in public in Washington, a city he says is full of cynics, smart alecks and people who have agendas rather than convictions.

But he opened up last week in a public interview at the National Archives, talking about his race, his faith and relations among the justices after a term that ended with bitter divisions.

For the most part, Justice Thomas spoke somberly about the weight of history and the burdens of his job. But he allowed himself the occasional bit of rueful humor.

“People say horrible things,” he said, smiling. “They say that, well, I’m not black. So I’m just a little doubtful I should say I’m black.”

He said he preferred a time when there was less identification of “who’s what,” and he recalled his youth.

The occasion for the interview was the Constitution’s 225th anniversary and the publication of a new book called “America’s Unwritten Constitution.” Its author, Akhil Reed Amar, a law professor at Yale, questioned Justice Thomas for more than an hour.

When Professor Amar mentioned that there are, for the first time in history, no Protestants on the Supreme Court, Justice Thomas changed the subject.

“We’re all from the Ivy League,” he said. “That seems to be more relevant than what faith we are.”

(Justice Thomas is one of six Catholics on the court. The other three justices are Jewish.)

He did say that religion played an important role in the nation’s founding and in his own life.

“I grew up in a religious environment, and I’m proud of it,” he said. “I was going to be a priest; I’m proud of it. And I thank God I believe in God, or I would probably be enormously angry right now.”

He did not elaborate on that last point, but there has often been an undercurrent of bitterness in Justice Thomas’s public remarks since his confirmation hearings in 1991, when he faced accusations of sexual harassment.

The evening was sponsored by the Federalist Society, a conservative group, and theConstitutional Accountability Center, a liberal one. They agree, though, that constitutional interpretation should be rooted in the document’s text and history. Those are principles closely associated with Justice Thomas, but he seemed to dismiss them.

“You’re supposed to say there’s some angle, some methodology you’re pushing,” he said. “There’s originalism. There’s textualism. All these useless peripheral debates other than just doing our jobs as best we can.”

In June, the Supreme Court upheld President Obama’s health care law by a 5-to-4 vote, with Chief Justice John G. Roberts Jr. and the court’s four more liberal members in the majority. The chief justice’s vote was a surprise, and there were reports of a rift between him and some of his usual allies among the court’s conservatives.

Justice Thomas did not address the controversy directly, but he said relationships on the court are cordial.

“Do we agree?” he asked. “No more than the framers agreed.”

But he said the disagreements were principled and civil. “These are good people,” he said of his colleagues.

He cited Justice Ruth Bader Ginsburg, the senior member of the court’s liberal wing, calling her “a fabulous judge” and a friend.

“A lot, actually,” Professor Amar responded, and a look of incredulity passed over the justice’s face.

“Oh, the unanimous cases,” Justice Thomas said with a lightly mocking tone that suggested the professor was both right and wrong. “I like that. That’s really a shrewd move. There’s one category of cases in which we agree. What are they? The unanimous cases.”

In fact, Justices Thomas and Ginsburg agreed in 21 percent of the court’s divided cases in the last term, tying for last place, according to Scotusblog. (The other pair of justices least likely to agree was Justice Ginsburg and Justice Antonin Scalia.)

Even as Justice Thomas spoke passionately about the stain that slavery and segregation left on the nation’s history, he seemed wary about giving the courts too large a role in addressing their legacy. On Oct. 10, the court will hear a major case about affirmative action in higher education, Fisher v. University of Texas, and Justice Thomas will almost certainly vote against allowing the university to take account of race in admissions decisions.

In reflecting on his youth, Justice Thomas rejected one of the rationales the Supreme Court offered in 1954 in Brown v. Board of Education for forbidding segregation in public schools.

“I hear people say, it affected your self-esteem to be segregated,” he said. “It never affected mine.”

He also shared a memory about Justice Thurgood Marshall, who argued the Brown case and whom Justice Thomas succeeded on the Supreme Court.

“I sat with him in a meeting when I first got to the court, a courtesy visit that was supposed to last 10 minutes,” Justice Thomas said. “It lasted two-and-a-half hours, and he regaled me with stories.”