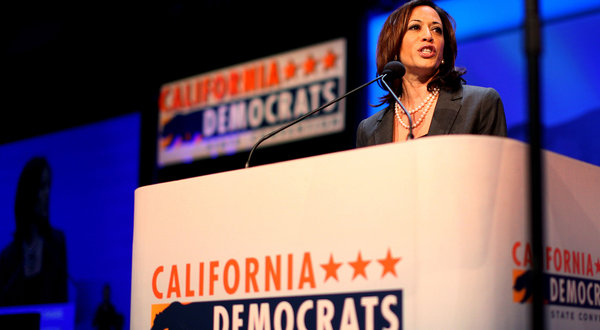 LOS ANGELES — Kamala D. Harris, the attorney general of California, could have derailed a nationwide settlement with big banks over home foreclosure abuses when she walked out of talks last September. 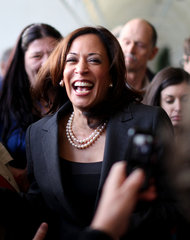 Kamala D. Harris, the attorney general, with supporters at the California Democrats State Convention in San Diego on Saturday.

Last week, though, she emerged with a prize and a little vindication. Ms. Harris, already a rising Democratic star and a potential candidate for governor, announced that California would receive by far the largest share of the benefits in the deal, which is expected to climb beyond the $26 billion in the initial announcement.

Along the way, Ms. Harris charted a lonely course, keeping her distance from potential allies and angering some of her peers in other states, who saw her as grandstanding. On one side, Ms. Harris, a close Obama ally, faced increasing pressure from the administration to return to the negotiating table. On the other, liberal groups mounted a concerted push to get her to wring more from the banks.

But Ms. Harris wagered that holding out until the end in the settlement talks would give her the most leverage. In the end, she walked away with far more than California was slated to receive in the early days of the talks and a little more than was on the table as recently as January. Beaming into the cameras last Thursday, she said California homeowners were guaranteed $12 billion in debt reduction, while most other states received only promises.

Not only did she get the guarantee, she said, but the “California commitment” includes special penalties if the banks do not fulfill their part of the deal. Furthermore, she maintains the right to pursue claims on behalf of the state’s pension fund.

Critics said that her theatrics won her little more than California would have received anyway, because the state has the greatest number of troubled home loans, and that her threats to hold banks accountable have been just that, while officials in several other states have filed lawsuits.

Michael Hiltzik, a business columnist for The Los Angeles Times, called the overall settlement “a parade of rosy self-congratulation,” adding, “I believe the technical term for all this is ‘big whoop.’ ”

Still, the deal is a victory for a woman who is no stranger to winning, in court or in politics. A longtime prosecutor who exudes confidence and charisma, in 2003, she waged a successful campaign to become the San Francisco district attorney, defeating the incumbent, Terence Hallinan, a reliable liberal and her former boss. Last year, she defeated the district attorney of Los Angeles, her Republican opponent for attorney general, in a race so close that he initially declared victory. She became the first woman and the first African-American attorney general of California.

“Afterwards she asked me, ‘Did you know everyone thought we were going to lose?’ ” said Debbie Mesloh, her former spokeswoman.

Ms. Harris, 47, possessed an aura of glamour even when she entered the public eye in the mid-1990s, as a young prosecutor, a trustee of the San Francisco Museum of Modern Art and the girlfriend of Willie Brown, soon to be mayor of San Francisco, on whom she was said to convey an air of gravitas. In part because of her heritage — she is the daughter of an Indian-American mother and a Jamaican-American father — she is often compared to President Obama.

She is the kind of person who turns heads when she enters a room. She made the “power list” in O magazine and confided, in a Harper’s Bazaar profile last year, her penchant for Manolo Blahnik shoes and Chanel handbags.

But when she talks about the many suffering homeowners she has met, she is perfectly serious. California has more than two million of the 11 million Americans who owe more on their mortgage than their home is worth. It has seven of the 10 cities with the highest rate of foreclosure, and the bulk of the loans made by Countrywide, considered among the most destructive.

In an interview, Ms. Harris said that she thought the amount of money in the settlement talks was inadequate from the start, but she weighed the urgency of getting aid to homeowners quickly against the time a lawsuit would take.

In a homicide case, she said: “You’re talking about something where the body’s cold. So the conversation is about punishment, it’s about restitution. This was not that. Every day there are homeowners in California who will either receive relief so they can stay in their home, or will be in the foreclosure process and potentially lose their home. And that always weighed heavily on my mind.”

She did not, however, join the growing chorus of critics of the deal last summer, though liberal groups, who wanted to make sure the deal did not interfere with their goal of a broad investigation of the banks, repeatedly asked her to show her hand.

In July, New York’s attorney general, Eric T. Schneiderman, flew to San Francisco to try to persuade her to join his efforts to pursue a broad investigative strategy with a coalescing group of other attorneys general, but got no commitment. After Mr. Schneiderman was kicked off the settlement negotiating committee in late August, his liberal and labor allies focused their efforts on pressuring Ms. Harris to walk as well, believing that her defection was necessary to stop a deal they thought was too lenient.

The groups feared that Ms. Harris’s ties to the administration — her brother-in-law is a high-ranking Justice Department official, and she is one of Mr. Obama’s top surrogates in California — would keep her on board.

“It seemed from the outside perspective like it took a lot of work to get her where we needed her to be,” said one person who was involved in the groups’ campaign but spoke on condition of anonymity to preserve future relations with the attorney general. Leaving the table “was a political decision” for Ms. Harris, he said. “It wasn’t like she was some hard-charging A.G. that wanted to take on the banks.”

On the inside, though, Ms. Harris was far from sanguine about the progress of negotiations, a member of her legal team said. She met with the banks face-to-face for the first time in mid-September. That meeting ended much earlier than expected, when the sides came to an impasse over the banks’ desire for immunity from certain types of claims, which Ms. Harris opposed. When the banks would not budge, the lawyer recalled, she told them, “I am going to investigate everything.”

Ratcheting up the pressure, the liberal groups persuaded Lt. Gov. Gavin Newsom, widely regarded as Ms. Harris’s potential rival for the governorship, to sign on to a letter from a coalition called Californians for a Fair Settlement that said the deal was “deeply flawed” and “outrageous,” and that the total amount — then $20 billion — “might not even be enough to cover damages for the state of California, let alone the entire country.”

The next day, Ms. Harris withdrew from the talks. Her spokesman said the timing of the letter was irrelevant.

John Eller, a community organizer with ReFund California, a coalition focused on foreclosure reform, said the letter had the desired effect. “She saw that it made sense. Whether it gave her leverage to get out, or pressure to get out — it happened.”

Ms. Harris did not, however, fall in step with the other dissident attorneys general, as the liberal groups hoped she would. Instead, she says, she held out for a quantifiable, enforceable deal. “I took an oath to represent California, and that’s what I was doing,” Ms. Harris said. “It was about making sure that Californians got what they needed.”

In the final deal, Ms. Harris did not get everything she wanted, like a moratorium on foreclosures, or a bigger pot of money for homeowners who went through foreclosure, who are expected to received close to $2,000 each.

The customer service reforms in the settlement are in force for only three years, and Ms. Harris said she planned to take the fight to the State Legislature to make them permanent.

“The battle in terms of having lasting reform is going to, I think, be unfortunately much more difficult than it should be,” she said. “To convince folks that we need to change the rules, against very powerful interests.”

Former US Rep. Katie Hall of Indiana Dies at 73

Ted Nugent’s new racist rant: ‘The blacks’ are to blame for their own oppression