Over the past twenty-five years or so, ever since her spectacular New York début at the Drawing Center, in 1994, the now forty-four-year-old artist Kara Walker’s visual production—sculptures, cutouts, drawings, films—has been diaristic in tone. But the diary Walker keeps is not explicitly personal; it’s a historical ledger filled with one-line descriptions about all those bodies and psyches that were bought and sold from the seventeenth century on, when slavery became the American way of life and its maiming shadows pressed down on black and white souls alike. Walker knows that ghosts can hurt you because history does not go away. Americans live, still, in an atmosphere of phantasmagorical genocide—we kill each other with looks, judgments, the fantasies that white is better than black and that blackness is bestial while being somehow more “humane”—read mentally inferior—than whiteness. But what do those colors even mean? 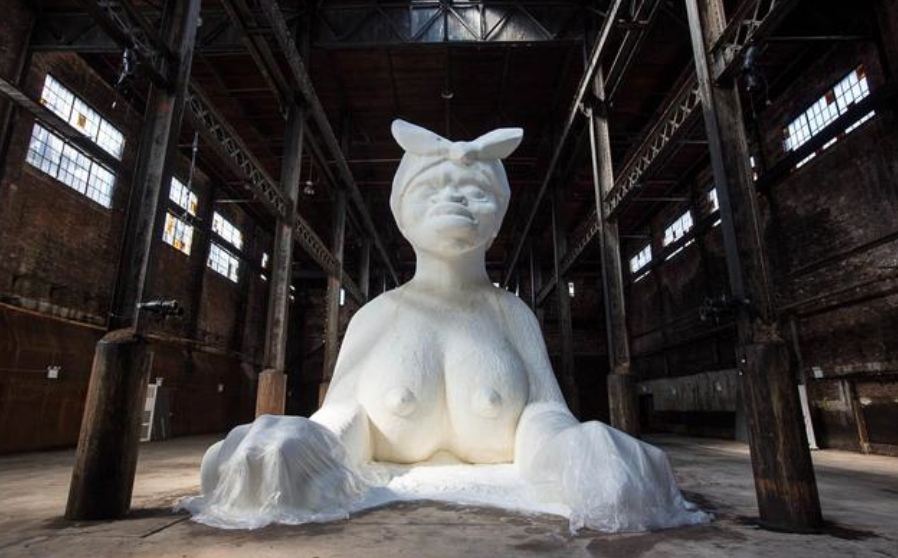 In Walker’s view, they are signifiers about power—the power separating those who have the language to make the world and map it, and those who work that claimed land for them with no remuneration, no hope, and then degradation and death. In her silhouettes, Walker’s black characters are often fashioned out of black paper—the color of grief—while her white characters live in the white space of reflection. But, in recent years, this scheme has begun to change—radically, upping the ante on what Walker might “mean” in her gorgeously divisive work. Take, for instance, the success of Walker’s latest piece:

At the behest of Creative Time Kara E. Walker has confected: A Subtlety or the Marvelous Sugar Baby an Homage to the unpaid and overworked Artisans who have refined our Sweet tastes from the cane fields to the Kitchens of the New World on the Occasion of the demolition of the Domino Sugar Refining Plant

The title says it all, and then not. Located in Williamsburg, the Domino Sugar Factory was built in 1882; by the eighteen-nineties, it was producing half the sugar being consumed in the United States. As recently as 2000, it was the site of a long labor strike, in which two hundred and fifty workers protested wages and labor conditions for twenty months. (I saw the piece before the installation was complete and look forward to going back.) Now the factory is about to be torn down and its site developed, and its history will be eradicated by apartments and bodies that do not know the labor and history and death that came before its moneyed hope. The site is worth mentioning at length because Walker’s creation is not only redolent of its history, it’s of a piece with the sugar factory—and its imminent destruction. Measuring approximately seventy-five and a half feet long and thirty-five and a half feet high, the sculpture is white—a mammy-as-sphinx made out of bleached sugar, which is a metaphor and reality. Remember, sugar is brown in its “raw” state. Walker, in a very informative interview with Kara Rooney, says that she read a book called “Sweetness and Power: The Place of Sugar in Modern History.” There, she learned that sugar was such a commodity that, in the eleventh century, marzipan sculptures were created by the sultans in the East to give to the poor on feast days. This tradition made its way to Northern Europe, eventually, where royal chefs made sugar sculptures called subtleties. Walker was taken not only with those stories but with the history of the slave trade in America: Who cut the sugar cane? Who ground it down to syrup? Who bleached it? Who sacked it? Operating from the assumption, always, that history can be found out and outed, Walker’s sphinx shows up our assumptions: She has “black” features but is white? Has she been bleached—and thus made more “beautiful”—or is she a spectre of history, the female embodiment of all the human labor that went into making her? Walker’s radicalism has other routes, too: in European art history, which made Picasso and helped make Kara Walker. But instead of refashioning the European idea of coloredness—think about Brancusi and Giacometti’s love of the primitive and what they did with African and Oceanic art—Walker has snatched colored femaleness from the margins. She’s taken the black servant in Manet’s “Olympia”—exhibited the same year black American slaves were “emancipated”—and plunked her down from the art-historical skies into Brooklyn, where she finally gets to show her regal head and body as an alternative to Manet’s invention, which was based on a working girl living in the demimonde. Walker’s sphinx is triumphant, rising from another kind of half world—the shadowy half world of slavery and degradation as she gives us a version of “the finger.” (The sphinx’s left hand is configured in such a way that it connotes good luck, or “fuck you,” or fertility. Take it any way you like.) Now she’s bigger than the rest of us. Still, she wears a kerchief to remind us where she comes from. She is Cleopatra as worker: unknown to you because you have rarely seen her as she raised your children, cleaned up your messes—emotional and otherwise. Walker has made this servant monumental not only because she wants us to see her but so the sphinx can show us—so she can get in our face with her brown sugar underneath all that whiteness. And, if that weren’t interesting enough, Walker has given her sphinx a rear—and a vulva. Standing by the sphinx, you may recall the playwright Suzan-Lori Parks’s 1995 essay “The Rear End Exists”:

Legend has it that when Josephine Baker hit Paris in the ’20s, she “just wiggled her fanny and all the French fell in love with her.” … [But] there was a hell of a lot behind that wiggling bottom. Check it: Baker was from America and left it; African-Americans are on the bottom of the heap in America; we are at the bottom on the bottom, practically the bottom itself, and Baker rose to the top by shaking her bottom.

The sphinx crouches in a position that’s regal and yet totemic of subjugation—she is “beat down” but standing. That’s part of her history, too. And then, again, there’s art history. Over the years, we’ve seen the sphinx at the Pyramids, but have we ever wondered what was beyond that mystery? Walker shows us the mystery and reality of female genitalia while calling our attention, perhaps, to all those African women whose genitalia have been mutilated because they are “slaves” in blackness, too. When has the sphinx ever had a home? What is her real secret? The monumentality of her survival, the blood of her past now “refined,” made white, built to crumble. Photograph by J Grassi/Patrickmcmullan.com/AP.

To Be Black at Stuyvesant High