If Africa was the cradle of humanity, then Europe was the site of our species’ adolescence–or so it has often been supposed. Forty thousand years ago, according to this theory, when the first anatomically modern humans arrived in Europe, they suddenly developed complex modern behaviors. They became master toolmakers, cave painters, and speakers of language; they underwent, all at once, a Great Leap Forward. I think that old theory is going to go out the window, says Alison Brooks. A few years ago, Brooks, an archeologist at George Washington University, wouldn’t have dared to speak with so much confidence. In 1988, while digging at a Middle Stone Age site in Zaire called Katanda, Brooks and her husband, archeologist John Yellen, were stunned to find a beautifully carved barbed bone point. We all stopped dead, recalls Brooks. We assumed the place was completely screwed up, because we thought we were dealing with a site that was at least 40,000 to 50,000 years old– and bone points shouldn’t be in anything that old. At that time in Europe, Neanderthals were still hacking away at reindeer carcasses with their flaked stone tools. Bone tools comparable to the one at Katanda didn’t show up in Eurasia until about 14,000 years ago. 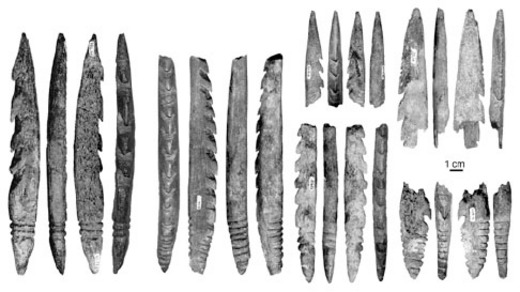 But as Brooks and Yellen continued to dig at Katanda, on three cliffs overlooking the Semliki River, they found more and more exquisitely crafted harpoons and other bone tools in Middle Stone Age strata. It was clear that the bone points hadn’t fallen in from some other layer, says Brooks. There were just too many of them. Many of Brooks’s peers, though, found that conclusion less than inescapable, and they greeted her reports with skepticism. To convince them that such advanced tools were being made in Africa tens of thousands of years earlier than in Europe, Brooks knew she would have to date the tools in several different ways. For the past five years, she and her colleagues have been doing exactly that, and they’ve just published their results. The Katanda tools, the researchers say, are not 40,000 years old after all. They’re more like 90,000 years old.

Artifacts that old are beyond the reach of radiocarbon dating, so Brooks and her colleagues had to rely on more experimental methods. For instance, they dated a sand layer just above the tools by means of thermoluminescence, in which a flash of light given off by electrons in a heated sample indicates how long it’s been since the sample was buried and electrons started accumulating in its mineral structure. And they dated hippopotamus teeth found alongside the bone tools by means of electron-spin resonance, another way of counting trapped electrons. The researchers used four different dating techniques in all, and to Brooks they all point to the same conclusion: there were modern humans making sophisticated tools at Katanda sometime between 110,000 and 80,000 years ago. Apparently they were fishermen: the site is littered with catfish bones. Moreover, the bones are all about the same size–the size of adult spawning fish. Brooks thinks the toolmakers came to Katanda and made their harpoons every year during catfish season. That kind of thinking ahead, knowing what you’re going to eat for dinner six months from now because you’re going to Semliki to hunt the giant catfish, Brooks explains, is a kind of behavior we didn’t think that early modern humans in Africa or anybody at this time period was capable of.

She hasn’t convinced all the skeptics, of course; her dating techniques are too experimental for that. More evidence that bone-tool technology had spread to other sites in Africa would help her case, too. (There must have been a hell of a lot of dull people around these people fishing in Semliki, says one skeptic.) But Brooks thinks the case for a gradual coevolution of human anatomy and human culture in Africa, rather than a sudden cultural leap in Europe 40,000 years ago, is now pretty clear-cut. We’ve done four dating techniques at Katanda, and they’ve all come out old, she says. It doesn’t really matter at this point in our state of knowledge of the Middle Stone Age if the site is 80, 90, 100, 110 thousand years old. The fact is that it’s not 40. This shows us that we don’t have a simple Great Leap Forward in Europe, she goes on. And we don’t have this paradox that people talk about in textbooks whereby humans in Africa look modern but behave like Neanderthals.