JANUARY 28, 2013, 12:01 AM
By JANE E. BRODY
Since the start of the 21st century, Americans have made great progress in controlling high blood pressure, though it remains a leading cause of heart attacks, strokes, congestive heart failure and kidney disease.
Now 48 percent of the more than 76 million adults with hypertension have it under control, up from 29 percent in 2000.
But that means more than half, including many receiving treatment, have blood pressure that remains too high to be healthy. (A normal blood pressure is lower than 120 over 80.) With a plethora of drugs available to normalize blood pressure, why are so many people still at increased risk of disease, disability and premature death? Hypertension experts offer a few common, and correctable, reasons:
¶ About 20 percent of affected adults don’t know they have high blood pressure, perhaps because they never or rarely see a doctor who checks their pressure.
¶ Of the 80 percent who are aware of their condition, some don’t appreciate how serious it can be and fail to get treated, even when their doctors say they should.
¶ Some who have been treated develop bothersome side effects, causing them to abandon therapy or to use it haphazardly.
¶ Many others do little to change lifestyle factors, like obesity, lack of exercise and a high-salt diet, that can make hypertension harder to control.
Dr. Samuel J. Mann, a hypertension specialist and professor of clinical medicine at Weill-Cornell Medical College, adds another factor that may be the most important. Of the 71 percent of people with hypertension who are currently being treated, too many are taking the wrong drugs or the wrong dosages of the right ones. 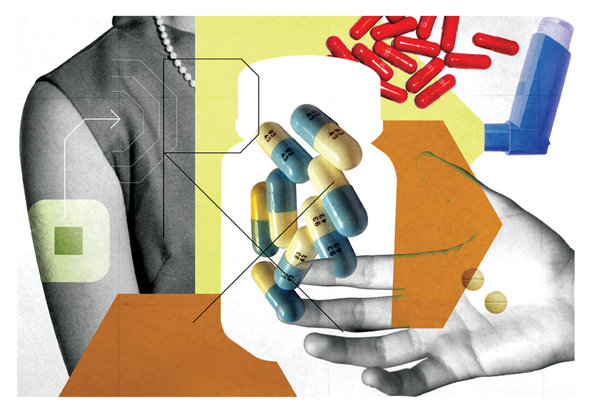 Dr. Mann, author of “Hypertension and You: Old Drugs, New Drugs, and the Right Drugs for Your High Blood Pressure,” says that doctors should take into account the underlying causes of each patient’s blood pressure problem and the side effects that may prompt patients to abandon therapy. He has found that when treatment is tailored to the individual, nearly all cases of high blood pressure can be brought and kept under control with available drugs.
Plus, he said in an interview, it can be done with minimal, if any, side effects and at a reasonable cost.
“For most people, no new drugs need to be developed,” Dr. Mann said. “What we need, in terms of medication, is already out there. We just need to use it better.”
But many doctors who are generalists do not understand the “intricacies and nuances” of the dozens of available medications to determine which is appropriate to a certain patient.
“Prescribing the same medication to patient after patient just does not cut it,” Dr. Mann wrote in his book.
The trick to prescribing the best treatment for each patient is to first determine which of three mechanisms, or combination of mechanisms, is responsible for a patient’s hypertension, he said.
¶ Salt-sensitive hypertension, more common in older people and African-Americans, responds well to diuretics and calcium channel blockers.
¶ Hypertension driven by the kidney hormone renin responds best to ACE inhibitors and angiotensin receptor blockers, as well as direct renin inhibitors and beta-blockers.
¶ Neurogenic hypertension is a product of the sympathetic nervous system and is best treated with beta-blockers, alpha-blockers and drugs like clonidine.
According to Dr. Mann, neurogenic hypertension results from repressed emotions. He has found that many patients with it suffered trauma early in life or abuse. They seem calm and content on the surface but continually suppress their distress, he said.
One of Dr. Mann’s patients had had high blood pressure since her late 20s that remained well-controlled by the three drugs her family doctor prescribed. Then in her 40s, periodic checks showed it was often too high. When taking more of the prescribed medication did not result in lasting control, she sought Dr. Mann’s help.
After a thorough work-up, he said she had a textbook case of neurogenic hypertension, was taking too much medication and needed different drugs. Her condition soon became far better managed, with side effects she could easily tolerate, and she no longer feared she would die young of a heart attack or stroke.
But most patients should not have to consult a specialist. They can be well-treated by an internist or family physician who approaches the condition systematically, Dr. Mann said. Patients should be started on low doses of one or more drugs, including a diuretic; the dosage or number of drugs can be slowly increased as needed to achieve a normal pressure.
Specialists, he said, are most useful for treating the 10 percent to 15 percent of patients with so-called resistant hypertension that remains uncontrolled despite treatment with three drugs, including a diuretic, and for those whose treatment is effective but causing distressing side effects.
Hypertension sometimes fails to respond to routine care, he noted, because it results from an underlying medical problem that needs to be addressed.
“Some patients are on a lot of blood pressure drugs — four or five — who probably don’t need so many, and if they do, the question is why,” Dr. Mann said.

How to Measure Your Blood Pressure
Mistaken readings, which can occur in doctors’ offices as well as at home, can result in misdiagnosis of hypertension and improper treatment. Dr. Samuel J. Mann, of Weill Cornell Medical College, suggests these guidelines to reduce the risk of errors:
¶ Use an automatic monitor rather than a manual one, and check the accuracy of your home monitor at the doctor’s office.
¶ Use a monitor with an arm cuff, not a wrist or finger cuff, and use a large cuff if you have a large arm.
¶ Sit quietly for a few minutes, without talking, after putting on the cuff and before checking your pressure.
¶ Check your pressure in one arm only, and take three readings (not more) one or two minutes apart.
¶ Measure your blood pressure no more than twice a week unless you have severe hypertension or are changing medications.
¶ Check your pressure at random, ordinary times of the day, not just when you think it is high.