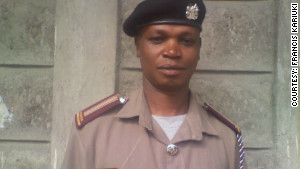 A Kenyan chief in a town far from the bustling capital foiled a predawn robbery recently using Twitter, highlighting the far-reaching effects of social media in areas that don’t have access to the Internet.

Chief Francis Kariuki said he got a call in the dead of the night that thieves had broken into a neighbor’s house.

He turned to Twitter, which allows users to send messages in 140 characters or less, to reach his community instantly.

“Thieves in Kelven’s living room, let’s help him out please,” he tweeted in Swahili, the local language.

Local residents, who subscribe to his tweets through a free text messaging service, jumped into action. They surrounded the house, sending the thugs fleeing into the night.

He later sent a message thanking the community in his town of Lanet Umoja for coming out.

While Twitter has been associated with bolstering uprisings and anti-government protests in Africa, its use is expanding in the continent, with communities in remote areas tailoring the global service and making it work for local audiences.

In the town 100 miles from Nairobi, a majority of residents don’t have access to computers, the Internet or smart phones. The sporadic cyber cafes strewn across the landscape charge for Internet access.

However, almost every household has a cell phone and text messages are a major form of communication in the nation.

“Every time we have barazas (meetings) twice a month, I make attendees subscribe to my tweets using their regular SMS or text messaging services,” Kariuki said by phone from the town. “It has not only saved on the cost of fliers, it has also allowed us to save trees and contribute to green efforts.”

Subscribers get his tweets in real time in the form of free text messages, and don’t need to have a Twitter account or an Internet connection to receive them. The chief can send them any time using his smart phone.

“It’s all about empowering the local person on the ground with information,” Kariuki said by phone. “Before I decided on this, I asked around — how can I reach all my people in one time at no cost to them?”

Kariuki leads a community of 28,000 residents and while his Twitter account shows he has about 400 followers — or people who get his tweets online — the chief said those who receive his tweets via text message are in the thousands.

“They just don’t register as followers because they don’t have Twitter accounts,” he said. “A lot of people in town get the text tweets, even the thieves and police.”

The chief’s use of social media allows him to reach everyone at the same time, and residents say the effort is paying off.

“He has really helped us know what’s going on around us. Now we know to expect a message from the chief any time, so we don’t turn off our phones at night,” said Jane Wangari, who lives in the town.

In addition to rallying the community, the chief also uses social media to share doses of encouragement and send out alerts about missing animals.

“There’s a donkey that’s been tied under a tree for days, we don’t know its owner, help please,” he tweeted recently after a message about a missing sheep that was later found.

A recent study shows social media use in the continent is growing, with South Africa sending the most tweets, followed by Kenya and Nigeria. Egypt and Morocco follow in the list of top five most active countries.

The report this month by Portland Communications and the trend-analysis group Tweetminster based its conclusion on a three-month study of tweets from the continent.

About 57% of tweets from Africa are sent from mobile devices, according to the study.

“We saw the pivotal role of Twitter in the events in North Africa last year, but it is clear that Africa’s Twitter revolution is really just beginning,” Beatrice Karanja, head of Portland Nairobi, said in a statement. “Twitter is helping Africa and Africans to connect in new ways and swap information and views. And for Africa — as for the rest of the world — that can only be good.”

During the study, South Africa — the leading country in the study — sent about 5 million tweets, nearly twice as many as second-place Kenya.

The Church, Repentance, and Racial Reconciliation