SENECA, SC (FOX Carolina) –The KKK is recruiting in the Upstate. And a Seneca subdivision woke up Sunday to find bags of candy on their driveways with literature directing people to “Save our land, join the Klan.”
One family in the neighborhood is especially concerned, not realizing that the Ku Klux Klan, known for violence against African Americans and minorities through its history, was still around.

Now they’re scared, afraid of the KKK’s reputation and they’re upset that the organization that’s classified as a “hate group” is in their area.

A voicemail message picked up when someone dials the “Klan Hotline” listed on the paper. It starts with, “Be a man join the Klan! Illegal immigration is destroying America,” discusses immigration concerns and ends with, “always remember if it ain’t white, it ain’t right. White power.”

Robert Jones, the Imperial Klaliff of the sect, the Loyal White Knights, returned a call to FOX Carolina. He said that this weekend was their national night ride, a recruitment event they have three times a year. He said that chapters across the country drop literature overnight.

Jones said that the hotline has gotten around 20,000 calls a day and many people are interested in joining his cause.

The woman from Seneca, who does not want to be identified, said her family was on their way to church Sunday morning when they ran over the bag and stopped to check it out. 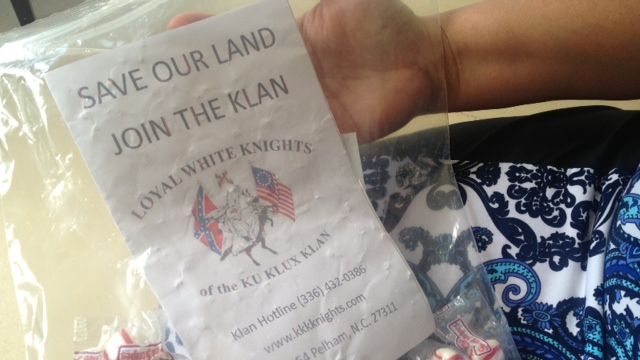 The flyer and bag of candy dropped in a Seneca woman’s driveway. (July 14, 2014/FOX Carolina)
She said it shocked her and made her angry.

“[I] talked to several neighbors. They were very angry, very upset, very ashamed at the same time – that this exists,” the woman said. “Ashamed to face our neighbors that do not have the same color skin that we do.”

Jones said that his members don’t target homes for their “national night ride.”

“I mean, we can’t tell who lives in a house, whether they’re black, white, Mexican, gay, we can’t tell that,” said Jones. “And if you were to look at somebody’s house like that, that means you’d be pretty much a racist.”

He said they’re not a hate group but a civil rights organization following the Bible. He said the Klan has always been strong throughout South Carolina and that this type of recruitment is nothing new.

With more than 8,500 members, Jones said these days their focus is protesting against illegal immigration.

He said people who receive the candy and literature shouldn’t be fearful unless they’re doing something that the Klan considers morally wrong.

“You shouldn’t have to wake up and fear that somebody might burn a cross in your yard or throw something like this out in your driveway with nothing but hurt in their intention,” said the Seneca woman.

The Loyal White Knights are allowed to speak their minds, protected under the First Amendment the same as anyone else.

Jones said his chapter is planning a public protest against illegal immigration in North Carolina on August 9, with a cross burning after dark.

He said people in the area will see more of this type of recruitment.

16 Year Old Girl Held Down and Raped by Classmates