About 75 members of the white supremacist group marched under police supervision inside a small fenced area downtown. No violence was reported and no arrests were made.

The Memphis police asked residents to avoid the rally site, and city leaders advertised a festival across town with live music and an Easter egg toss featuring Mayor A. C. Wharton Jr.

The Klan had called members across the country to Memphis. The rally was the latest response to the council’s decision on Feb. 5 to rename parks whose names it felt were racially insensitive and unwelcoming to black residents. 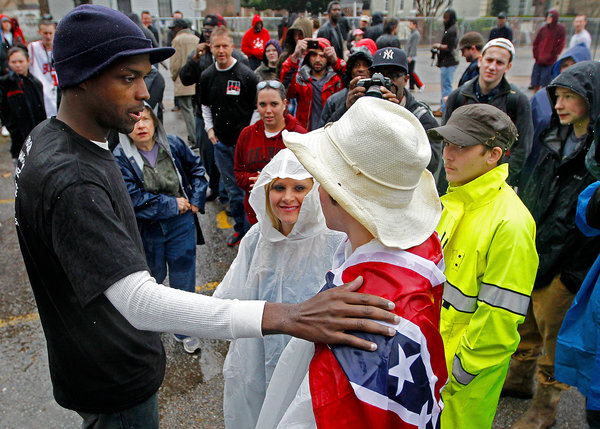 Lance Murphey for The New York Times—Shun Abram, left, a minister, confronted Joseph Cartwright Jr. near the site of a Ku Klux Klan rally in Memphis on Saturday.

The old names were Confederate Park; Jefferson Davis Park, named for the Confederacy’s president; and Nathan Bedford Forrest Park, named for a Confederate lieutenant general and the Klan’s first grand wizard. The new names are Memphis Park, Mississippi River Park and Health Sciences Park, but the council may change those, too.

The last time the Klan rallied in Memphis, in 1998, fighting broke out between members and counterprotesters, and the police fired tear gas to disperse the crowd. They arrested 20 people.

On Saturday, the group paraded with signs bearing swastikas and proclaiming “Save Our Parks.” The group’s megaphone malfunctioned and chants of “white power” were barely audible outside the protest area.