The next issue of the New Yorker has barely hit newsstands and already a comment from Kobe Bryant hinting that he may not be in lockstep with the black community on the Trayvon Martin shooting has people calling for a boycott of the Laker superstar’s gear.

In a wide-ranging interview, the future Hall of Famer was asked about the Miami Heat’s show of solidarity for Martin, the 17-year-old African-American shot to death in Florida by neighborhood watch volunteer George Zimmerman, who was acquitted last year of second degree murder. Bryant he seemed to take exception to the idea that African-Americans should base their opinions on race.

“I won’t react to something just because I’m supposed to, because I’m an African-American.”

“I won’t react to something just because I’m supposed to, because I’m an African-American,” Bryant said. “That argument doesn’t make any sense to me. So we want to advance as a society and a culture, but, say, if something happens to an African-American we immediately come to his defense? Yet you want to talk about how far we’ve progressed as a society? Well, we’ve progressed as a society, then don’t jump to somebody’s defense just because they’re African-American. You sit and you listen to the facts just like you would in any other situation, right? So I won’t assert myself.” 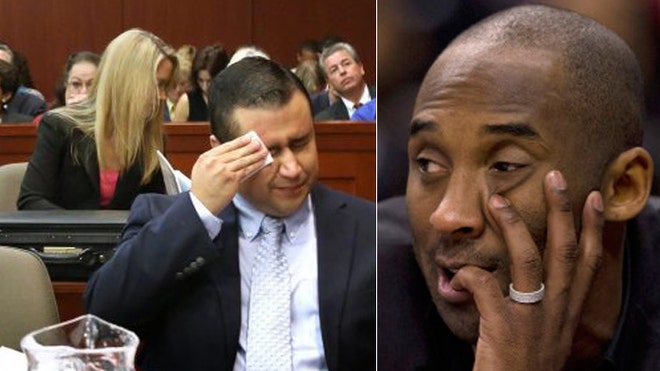 NBA superstar Kobe Bryant (r.) said his opinion on the trial of George Zimmerman (l.) in the shooting of Trayvon Martin was not based on race. (AP)

Although the 35-year-old Bryant, who spent much of his childhood in Italy, where his father was a professional basketball player, did not take a position on the merits of the case against Zimmerman, critics came down hard. Hall of Fame NFL running back Jim Brown told the article’s author Bryant doesn’t understand the African-American culture.

“[Kobe] is somewhat confused about culture, because he was brought up in another country,” Brown said.

“African American youth should no longer buy Bryant’s jerseys or shoes and should boycott all products he endorses,” Ali said in a statement. “Bryant doesn’t identify with the struggle that our African-American youth face nationally. So why should we continue to support Bryant who has never truly identified with the African American experience.”

Hours later, Bryant tweeted support for Martin, saying “Travon (sic) Martin was wronged THATS my opinion and thats what I believe the FACTS showed. The system did not work #myopinion #tweetURthoughts.”

Martin was killed Feb. 26, 2012, as he passed through the gated, Sanford, Fla., community where Zimmerman lived and served as a watch volunteer. The shooting prompted protests that the teen was deemed suspicious by Zimmerman because he was black and wearing a hoodie, and that charges were delayed because of Martin’s race. President Obama weighed in, saying that “If I had a son, he would look like Trayvon.” The Miami Heat, including Bryant’s rival superstar LeBron James, posed in a photo just weeks after the shooting, with players wearing hoodies in support of Martin.

At trial, Zimmerman’s defense attorneys argued successfully that Zimmerman shot the teen with his licensed handgun only after he was attacked and in fear of his life.