1-28-2013
By Frank Schwab
The NFL has no current players and startlingly few ex-players who are known to be gay, but it appears ex-49ers and Raiders offensive tackle Kwame Harris, a former first-round pick, has involuntarily been added to the list as a result of the legal fallout from a fight at a restaurant.
According to the San Mateo Daily Journal, a dispute over soy sauce at Su Hong restaurant in Menlo Park, Calif. last Aug. 21, has landed the former NFL player in court after he assaulted his ex-boyfriend.
Chief deputy district attorney Karen Guidotti told the paper that Harris and the alleged victim had been in a romantic relationship but were not involved at the time of the incident. Harris’ attorney Alin Cintean confirmed to the paper the two “were previously involved” but were just friends when the incident occurred.
Harris pleaded not guilty to felony charges of domestic violence causing great bodily injury and assault with force likely to produce great bodily injury, the Daily Journal said. The dispute started when Harris got upset at his friend, Dimitri Geier, for pouring soy sauce on a plate of rice.

According to the paper, which was citing a suit filed in San Mateo County Superior Court, the two argued for seven minutes after the soy sauce was poured, and Harris said he wasn’t going to take Geier to the airport as he had said he would. When the two went to get Geier’s belongings from Harris’ car, Harris accused Geier of stealing his underwear and tried pulling the man’s pants down. 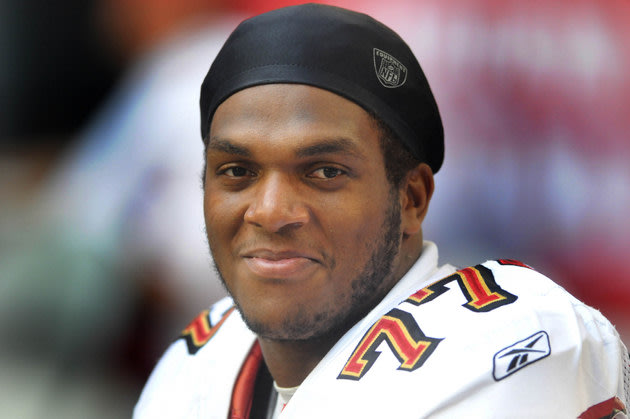 Geier tried unsuccessfully to get away, and Harris shook Geier and punched his arms, the paper said. Harris is 6-foot-7 and 240 pounds and Geier is 6-1, 220 pounds. The paper said Geier allegedly struck Harris three times in the face, and then Harris punched Geier several times in the face.
Geier was taken to an emergency room, and had surgery to repair broken orbital bones and required a metal plate to fix the damage, the paper said. The Daily Journal said Geier has filed a civil suit against Harris for assault, battery, false imprisonment, negligence and both intentional and negligent infliction of emotional distress. Harris could also face up to seven years in prison if convicted, Guidotti told the paper.
Harris played at Stanford and was a first-round pick of the 49ers in 2003. He played in 86 NFL games, starting 55, including 11 games during his lone season with the Raiders in 2008. That was the last time he played in the NFL.
Harris’ lawyer told the paper his client was acting in self-defense and that Geier is just trying to get money through the civil suit.
“We’re looking forward to having this proven in court and clearing his name,” Cintean said.