By JOHN ELIGON
Published: January 9, 2013
LINCOLN, Neb. — They came to him with hugs and elbow bumps (he rarely shakes hands), wide grins and hearty backslaps.
“I’m very pleased to see you again,” one man said.
“I’m excited,” a woman said, leaning in for an embrace.
A wave of love greeted Ernie Chambers, Nebraska’s legendary state senator, as he resumed his marathon legislative career on Wednesday after having sat out the last four years because of a term limits law that he believes was aimed at him.
His tenure was interrupted in 2008 after voters approved term limits that bar senators from serving more than two consecutive four-year terms. (He had already served nine.)
But they may return after sitting out a term, and Mr. Chambers, 75, in November defeated Brenda Council, who had taken his seat when he left. Mr. Chambers, who does not align himself with any mainstream political party, gamely returned the pleasantries on the opening day of Nebraska’s legislative session, but with a healthy dose of skepticism. 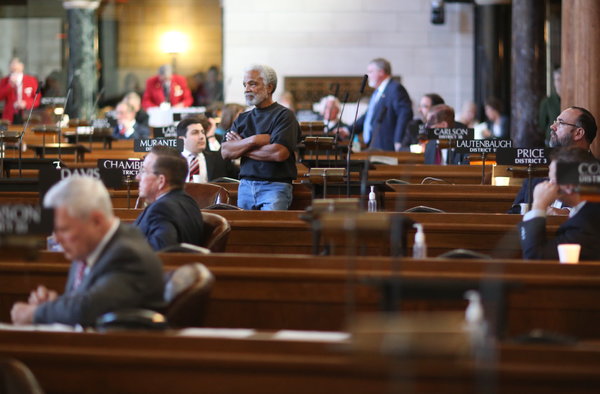 Ernie Chambers, center, a senator who was forced out of the Nebraska Legislature by a term limits law, came back on Wednesday.

Over a four-decade career in the unicameral Legislature here — longer than any other Nebraska senator’s — Mr. Chambers developed a reputation as the chamber’s most passionate and peskiest member. A master of process and procedure, he will do whatever necessary to derail a bill he does not like. His candor can leave a trail of hurt feelings.
So it remains to be seen how long his colleagues’ smiles will last. “If you were approaching a black panther, and he’s not in his cage, then you’re not going to do anything to antagonize him,” said Mr. Chambers, who in 1971 became the first black legislator elected in Nebraska. “Time will tell how real any of this is.” Later, he added, “I’m probably the most hated man in this state.”
Not one for sentimentality or formality, Mr. Chambers returned to the state Capitol much the way he left four years ago: wearing cuffed bluejeans, a short-sleeve sweatshirt and dark brown Timberland boots. His white beard and dome of white hair were similarly unchanged. He spoke poetically. Where other senators sat in the chamber as they conducted business, Mr. Chambers stood, leaning on a desk behind him, his fingers clasped.
Fellow legislators, their staffers, chamber guards and even a postal worker flocked to say hello. Some already wanted to talk policy. Mr. Chambers told one man that he did not care about another person’s politics. “My whole thing is how I get along with that person,” he said.
The mill of well-wishers seemed a bit much for a man who says he prefers solitude
“This is hard for me,” he whispered to his daughter, Gayla, as they stood at the back of the Senate floor. “But I’m trying to do the best I can.”
Gazing around the chamber, Ms. Chambers said, “He just likes to get to work.”
He does things his way. He has sued God (a judge threw out the case), fought vigorously against the death penalty and championed the interests of poor urban blacks. He operates with charm as well as force. When one senator introduced Mr. Chambers to his two granddaughters on Wednesday, Mr. Chambers encouraged them to start thinking about running for office someday. “You made my day,” he told them.
Mr. Chambers, who has a law degree from Creighton University in Omaha and parlayed his activism for the city’s black community in the 1960s into a Senate win, spent the past four years working on education issues.
“It’s as though I was not away. I didn’t make that intellectual disconnect,” Mr. Chambers said as a fire alarm suddenly blared in the Capitol and a passer-by joked, “Is this the ‘Ernie’s back’ alarm?”
Mr. Chambers said he was drawn to return in part because he felt that the Legislature was yielding too easily to Gov. Dave Heineman’s demands. The Republican governor knows he and Mr. Chambers do not agree on most issues, he said. But that does not dampen his respect for Mr. Chambers, or the fact that he is glad to see him return. “I think it’s good for the Legislature,” the governor said. “He will force them to think through every bill that’s on the floor.”