PHILADELPHIA — Four years ago as Viviette Applewhite, now 93, was making her way through her local Acme supermarket, her pocketbook hanging from her shoulder, a thief sliced the bag from its straps.

A document acknowledges that Wilola Shinholster Lee, 60, of Philadelphia, has applied for a new birth certificate to replace the one lost in a fire.

A former hotel housekeeper, Ms. Applewhite, who never had a driver’s license, was suddenly without a Social Security card. Adopted and twice married, she had several name changes over the years, so obtaining new documents was complicated. As a result, with Pennsylvania now requiring a state-approved form of photo identification to vote, Ms. Applewhite, a supporter of President Obama, may be forced to sit out November’s election for the first time in decades.

Incensed, and spurred on by liberal groups, Ms. Applewhite and others like her are suing the state in a closely watched case, one of a number of voter-identification suits across the country that could affect the participation of millions of voters in the presidential election. 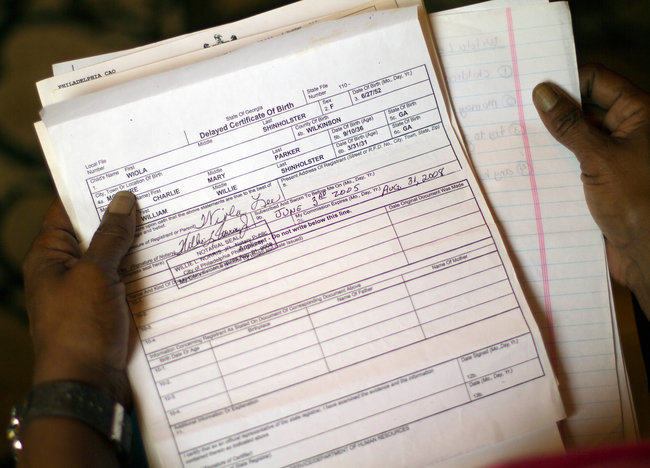 But Ms. Lee’s document is not considered enough to obtain a state-approved ID.

“They’re trying to stop black people from voting so Obama will not get re-elected,” Ms. Applewhite said as she sat in her modest one-bedroom apartment in the Germantown section of Philadelphia, reflecting a common sentiment among those who oppose the law. “That’s what this whole thing is about.”

Whether true or not, the focus on what Democrats call “voter suppression” is accelerating as the Nov. 6 election looms. Last week, Texas took the Obama administration to federal court because it blocked a voter identification law there on racial discrimination grounds. In Florida, officials successfully sued for access to a federal database of noncitizens in hopes of purging them from voter rolls, a move several other states plan to emulate. 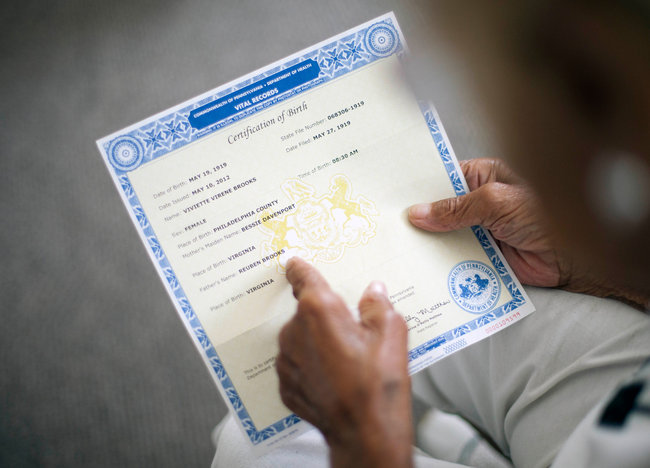 Viviette Applewhite, 93, also of Philadelphia, got a new birth certificate to replace one that was stolen.

Advocates say the laws have nothing to do with voter suppression and are about something else entirely: ensuring the integrity of elections, preventing voter fraud and improving public confidence in the electoral process in an era when photo identification is routine for many basic things, including air travel. 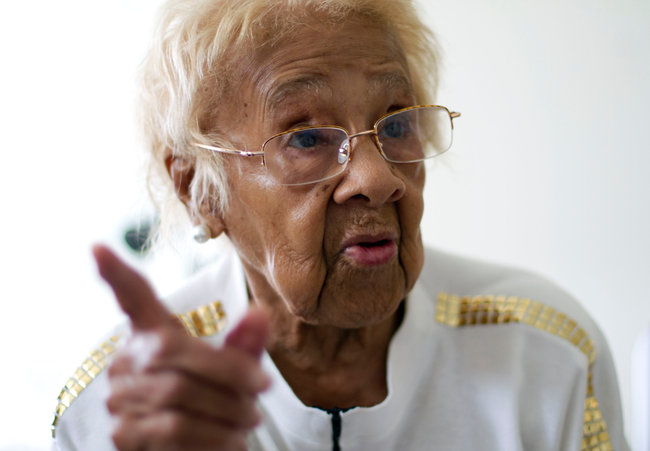 Without her Social Security card, which was stolen, Viviette Applewhite may not be able to get a state-approved identification for voting in Pennsylvania.

Attorney General Eric H. Holder Jr. said last week of the Texas statute, “We call those poll taxes,” a reference to fees that were once used in some Southern states to prevent blacks from voting. He said that while 8 percent of whites do not have the type of documentation that would be required by the Texas election law, the percentage among blacks is triple that.

Opponents of the laws note that nearly every state legislature that has passed them in the past two years is Republican-run and that those most affected are minority groups and the urban poor, constituencies that tend to vote Democratic.

In a report issued on Wednesday, the Brennan Center for Justice at New York University School of Law said it had found that obtaining proper voter identification in the affected states was difficult. More than 10 million eligible voters live more than 10 miles from their nearest ID-issuing office, and many of the offices maintain limited hours, the report said. Moreover, it said, despite pledges to make voter identification free, birth and marriage certificates, often needed for the process, cost $8 to $25, and many affected voters are poor.

The argument by the Pennsylvania law’s proponents that it has nothing to do with partisan politics took a blow late last month when Mike Turzai, the majority leader of the state’s House of Representatives, addressed a group of fellow state Republicans. Listing the accomplishments of the Republican-controlled legislature, he said, “Voter ID — which is going to allow Governor Romney to win the state of Pennsylvania — done.”

In Wisconsin, a voter identification requirement has been declared to be in violation of the state Constitution, but that ruling is expected to be appealed. Some Southern states, like Texas and South Carolina, have to clear any voting law changes with the Department of Justice under the Voting Rights Act of 1965. The department has rejected their identification requirements as discriminatory, and this past week Texas has been challenging that ruling in federal court in Washington. In September, South Carolina will take its case against the department to court.

One of the most closely watched cases is here in Pennsylvania, where polls show a tight race shaping up between Mr. Obama and Mitt Romney, the former Massachusetts governor.

“We don’t know whether voter fraud is a huge or a small problem, but we believe the new law will preserve the integrity of every vote,” said Ronald G. Ruman, spokesman for the Pennsylvania Department of State. “The goal is to make sure that every vote cast counts.”

This month, the Pennsylvania Department of State estimated that 759,000 registered voters may be at risk of not having the required identification. It promised to send a letter to each one explaining what needed to be done.

“Obama won Pennsylvania in 2008 by 600,000 votes,” said Witold Walczak, legal director of the American Civil Liberties Union of Pennsylvania, which is leading the challenge to the law. “What is most galling is to hear the law’s proponents argue that one person voting improperly undermines the integrity of the election. What about all the people prevented improperly from voting? Doesn’t that undermine the integrity of the election?”

When the trial against the law starts this month in the capital, Harrisburg, Mr. Walczak will put on the stand a number of Pennsylvanians with cases like Ms. Applewhite’s, asserting that they are unable to meet the requirements in time for the November election.

Among them will be Wilola Shinholster Lee, a 60-year-old retiree who was born in Georgia and has been unable to replace her birth certificate, which was lost in a house fire. Officials in Georgia told her that they too had suffered a fire and no longer had a record of her birth.

“I came here when I was 5 with my grandmother, who worked as a domestic,” Ms. Lee said. “She’s 98 and doesn’t have a photo ID either. She’s upset because she loves Obama.”

Ms. Lee has a Social Security card and an employee photo identification from her years working for the Philadelphia Board of Education. But without her birth certificate, she is unlikely to be able to vote in November.

In 2008, the Supreme Court upheld Indiana’s voter identification law, saying that although there was little evidence of fraud, the law did not pose an undue burden on voters. But the case in Pennsylvania is based on the state Constitution, which is more specific than the federal Constitution about the right to vote. The Pennsylvania law also has tighter restrictions than the one in Indiana.

Stewart J. Greenleaf, a Republican state senator in Pennsylvania and chairman of the judiciary committee, said in an interview in Harrisburg that he opposed the law because it was unnecessary given how uncommon in-person voter fraud has been. That will be a central argument in the lawsuit as well.

Mr. Walczak of the civil liberties union said: “The real danger from this law will come from people who don’t even know it exists or who think they have the right ID but don’t. Our position is that we will not know until Election Day how big a problem it is, and then it will be too late.”

So, why are blacks so loyal to a president who is not loyal to them?