Leo Branton Jr., a civil rights and entertainment lawyer whose stirring defense of ’60s radical Angela Davis brought him his most celebrated victory in a six-decade career often spent championing unpopular cases, died of natural causes Friday in Los Angeles. He was 91. His death was confirmed by his son Tony Nicholas.
Branton, the only African American graduate of Northwestern University’s law school in 1948, helped singer Nat King Cole integrate an exclusive Los Angeles neighborhood, defended Communists in McCarthy-era Los Angeles and won misconduct cases against the Los Angeles Police Department decades before Rodney King became a household name.
“He was a hero of mine,” said Connie Rice, a prominent Los Angeles civil rights attorney who helped lead efforts to reform the LAPD after the King beating.
“All the things I’ve done, Leo Branton did 50 years before I even thought about going to law school. He saw himself not as a private practitioner out to make money for himself but as a lawyer with the skills to be a champion for black liberation.” 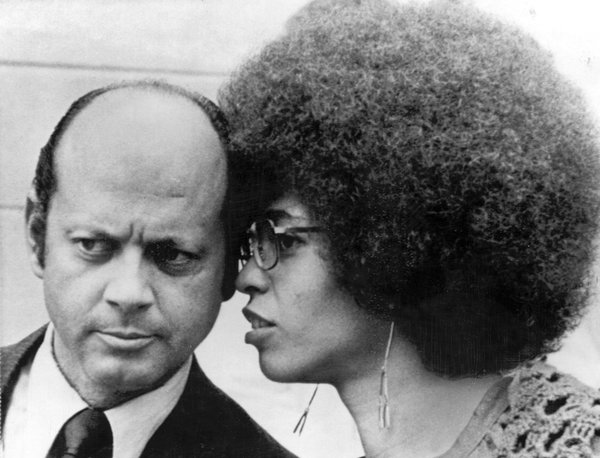 Associated Press—–Leo Branton Jr. with Angela Davis during her 1972 trial on murder, kidnapping and conspiracy charges. She was acquitted.

Branton earned national attention as co-lead defense attorney at the sensational 1972 trial of Davis, a UCLA professor fired for her Communist beliefs who faced the death penalty when a gun registered in her name was linked to the murder of a Marin County judge.
Davis, who was brought to trial after several months as a fugitive, was acquitted by an all-white jury. The stunning outcome was credited in part to Branton’s compelling courtroom style.
On the closing day of the trial, he stood before the jury with an easel holding a drawing of his client wrapped and bound in chains. He ripped down that drawing to reveal a picture of Davis unbound, and exhorted the jurors to “pull away these chains as I have pulled away that piece of paper.”
He then proceeded to persuasively poke holes in the prosecution’s case and, with a moving summary of centuries of African American history, asked the panel to “understand what it means to be black.”
“Certainly his brilliant closing argument had a profound impact on the jury,” Davis, now retired from the humanities faculty at UC Santa Cruz, told The Times on Thursday.
“What I most appreciated about Leo’s role in the case was his willingness to take seriously others’ ideas — including my own,” said Davis, who did not testify at the trial but helped question prospective jurors.
Born in Pine Bluff, Ark., on Feb. 17, 1922, Branton was the oldest of five children of taxi company owner Leo Sr. and his schoolteacher wife, Pauline. All five children went to college, including Wiley, who followed his brother into law and represented the nine black students who integrated Little Rock’s Central High School.
Branton earned a bachelor’s degree from Tennessee State University in 1942 and spent three years in the Army during World War II, where he saw combat in Italy. After the war, he earned a law degree at Northwestern in suburban Chicago and in 1949 moved to California.
Soon after opening a private practice in Los Angeles, he began taking on cases against the LAPD.
In the early 1950s, “I was the only lawyer in Los Angeles filing cases against the LAPD for … malfeasance. I probably filed more cases against the LAPD than the rest of the black bar,” he told The Times in an unpublished 2011 interview.
During the same period, he joined civil liberties lawyer Ben Margolis in a headline-generating case against 14 Communist Party members accused of conspiring to advocate the overthrow of the government. The defendants were convicted in Los Angeles in 1952, but Branton and his fellow attorneys won a reversal of the convictions in 1957, when the U.S. Supreme Court drew a distinction between advocating an abstract principle and actually trying to carry out the idea.
In 1952 he joined civil rights lawyer Charles Garry in a successful campaign to save the life of Robert Wesley Wells, a black man sentenced to death for assaulting a prison guard while serving a life term. Wells, whose case became a cause celebre among political progressives, was granted clemency by Gov. Goodwin J. Knight in 1954 and later was freed.
Branton also was building an entertainment practice. One of his first celebrity clients was Cole, the popular singer who angered white neighbors when he bought a stately home in Hancock Park in the late 1940s.
In 1955 Branton married Geraldine Pate Nicholas, who had been married to Fayard Nicholas of the tap-dancing Nicholas Brothers. Her close friendship with Dorothy Dandridge, the first African American actress nominated for an Academy Award, brought more celebrities to Branton’s client roster, which would later include the Platters, Miles Davis and Richard Pryor.
Branton’s wife died in 2006. In addition to Tony Nicholas, he is survived by sons Leo “Chip” Branton and Paul Nicholas; a brother, Sterling; a sister, Julia Branton Jones; and five grandchildren.
For two decades Branton also represented the father of rock icon Jimi Hendrix, who died in 1970 after overdosing on barbiturates. In 1993 Al Hendrix sued Branton and others to regain the control over his famous son’s image and music that he had signed away under contracts negotiated by Branton in 1974.
The lawsuit was settled out of court in 1995.
In the 1960s, Branton traveled numerous times to the South to work on civil rights cases. During one of his trips he met Rosa Parks, whose refusal to sit at the back of a bus in Montgomery, Ala., sparked the modern civil rights movement. He developed a close friendship with Parks, who for 10 years escaped cold Detroit winters to stay with Branton in Los Angeles.
In 1968, after the assassinations of the Rev. Martin Luther King Jr. and Robert F. Kennedy, Branton suspended his law practice and moved with his family to Mexico.
A sports fan, he was drawn there partly by the 1968 Summer Olympic Games in Mexico City, where two black sprinters raised their fists in a black power salute. But mostly “he was just extremely upset about the things happening in the U.S. The civil rights issue had bogged down,” his son Tony said. He returned to the U.S. in time to join Davis’ defense team.
A few years ago, he reenacted his closing argument for professor Charles Ogletree’s criminal law students at Harvard. “It was mesmerizing,” Ogletree said. “He taught my students … what a great lawyer can do to humanize a client and make a jury see that the burden of proof is on the government.”
Branton continued to practice law until early this year. His last case involved a dispute with a credit card company. “He argued the case,” his son said, “and won it.”

Rena Price Is Dead at 97; Catalyst for the Watts Riots