The phrase ‘United States of America’ may have been coined by an anonymous Virginia ‘planter’, rather than President and founding father Thomas Jefferson, according to a new discovery.

The National Archives cite the first known use of the ‘formal term United States of America’ as being the Declaration of Independence in June 1776, which would recognise Jefferson as the originator.

But historians have uncovered an example of the phrase published in The Virginia Gazette three months earlier. 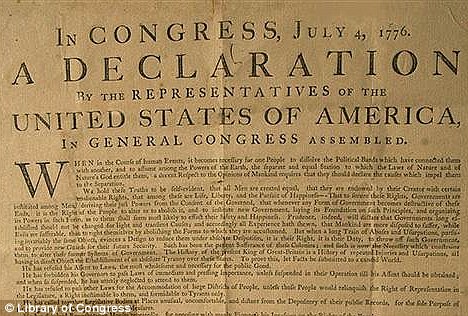 New discovery: The National Archives cite the first known use of the phrase ‘United States of America’ as being the Declaration of Independence, pictured, but an example has been discovered three months earlier

Beginning in March 1776, a series of anonymously written articles began appearing in the newspaper, published in Williamsburg, with the author signing off simply ‘A Planter.’

Addressed to the ‘Inhabitants of Virginia,’ the essays argue in favour of independence over reconciliation with Great Britain and voice for the first time what an independent America would be called, according to The Christian Science Monitor.

The essay reads: ‘What a prodigious sum for the united states of America to give up for the sake of a peace, that, very probably, itself would be one of the greatest misfortunes!’ – A PLANTER.

At the time, it was common for letters and essays to be published anonymously as their authors feared being charged with treason for voicing contentious beliefs.

It is only later that historians managed to identify some of the authors – however the planter’s identity has not been confirmed. 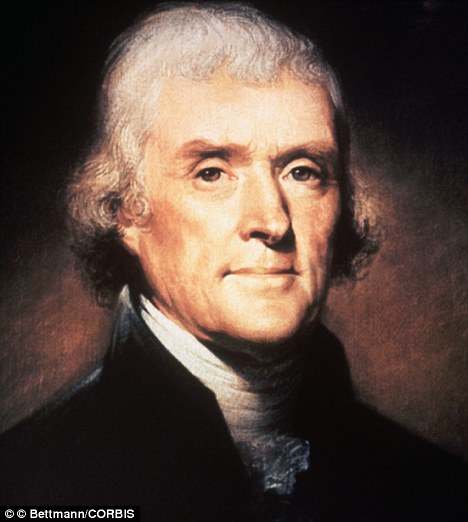 Jefferson: It seems a mystery Virginia ‘planter’ may have coined the term ‘United States of America’ rather than founding father Thomas Jefferson, pictured

Some believe it could be a well-known Virginian such as Richard Henry Lee or Patrick Henry or possibly a New Englander like John Adams, attempting to rally support for independence in the South.

Or it may be, as the name suggests, a hard-working landowner pondering the promise of increased prosperity should the 50 states become an independent nation.

Speculation generally swirls around a familiar cast of characters.

Several references incorrectly credit Thomas Paine with coming up with the name in January 1776.

But his book ‘Common Sense,’ uses the terms ‘United Colonies,’ ‘American states,’ and ‘Free and Independent States of America,’ but never uses the full form.

The National Archives claim Jefferson’s ‘original rough draught’ of the Declaration of Independence, written in June 1776, coined the term, stating ‘A Declaration by the Representatives of the UNITED STATES OF AMERICA in General Congress assembled.’

Black Caucus Leader: We Disagree With Presidents, Even Obama