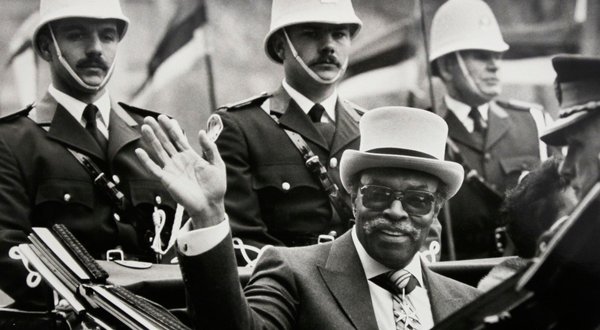 Lincoln Alexander in Toronto in 1986, when he was lieutenant governor of Ontario.

Lincoln Alexander, the son of a hotel maid and railway porter who became Canada’s first black member of Parliament and first black cabinet minister, died on Friday in Hamilton, Ontario. He was 90.

Mr. Alexander was also Canada’s first black lieutenant governor, but when he was elected to the House of Commons in 1968, he said he had tired of being called “the first Negro” anything. He sought to speak for all victims of injustice, he said. Blacks make up 2.5 percent of Canada’s population.

With his election to Parliament, he was one of the few urban members of the Progressive Conservative Party to buck the landside vote for Pierre Trudeau’s Liberals that year. In the Commons he became a leader in issues like immigration overhaul and urban renewal.

When the Conservatives gained power in 1979, he was named labor minister and promoted literacy education to enhance job preparation.

Mr. Alexander had a strong personality, bragging that nobody could beat him at “working a room” and roaring in Parliament that Liberals had “bamboozled” the public.

Lincoln MacCauley Alexander was born in Toronto on Jan. 21, 1922. His parents had come from the Caribbean. He was the only black in his classrooms through high school, except during the two years he lived in the Bronx, from age 15 to age 17. His mother had taken him and his brother there in a time of marital discord, but she sent him back to his father in Toronto when Lincoln began hanging out on New York streets and carrying a switchblade.

After working as a machinist and being a wireless operator for the Royal Canadian Air Force, he studied history and economics at McMaster University in Hamilton, graduating in 1949. He earned a law degree from Osgoode Hall Law School of York University. He was a partner in one of Canada’s first interracial law firms before winning election to Parliament.

After five terms, Mr. Alexander became chairman of Ontario’s workmen’s compensation board, Ontario’s lieutenant governor, a largely ceremonial post, and chancellor of the University of Guelph in Ontario.

Mr. Alexander’s wife of 51 years, the former Yvonne Harrison, died in 1999. In 2011 he married Marni Beale, who survives him. A son, Keith, and two granddaughters are also survivors.

Among the places named for Mr. Alexander is the Lincoln Alexander Parkway in Hamilton, although he never learned to drive and feared traffic. He always sat “in the back, real low,” he said, “so I can’t see what’s going on.”