On Aug. 19, 1862 Horace Greeley, the editor of The New York Tribune, published a long “open letter” to President Lincoln in his newspaper. Titled “The Prayer for Twenty Millions,” the letter demanded that Lincoln immediately move to end slavery, not only in the Confederacy, but also in the loyal slave states – Delaware, Maryland, Kentucky, and Missouri, as well as in those parts of Tennessee under control of the United States. The letter was noteworthy as a bold, widely read attack on the president by a major figure in his own party. Even more noteworthy, though, was Lincoln’s response.

The letter was tough, arrogant and marginally insulting to the president. Greeley, never known for his tact, said Lincoln was “strangely and disastrously remiss” in not vigorously moving toward emancipation and accused him of listening to “certain fossil politicians hailing from the Border Slave States” in his refusal to undermine slavery. But in doing so the president was in fact undermining the war effort: supporters of the Union, Greeley reported, thought it was “preposterous and futile” to fight the rebellion without fighting slavery.

Lincoln responded to Greeley’s open letter in a remarkable way: he wrote a letter to the editor, the first and only time a sitting president has done so. Greeley dutifully published it.

The letter was a classic example of Lincoln’s political sense and ability to shape events. With brilliant tact, Lincoln made sure readers knew that much of Greeley’s letter was wrong, and that the president was fully aware of its offensive tone, but that the president would take the high road on these matters. Greeley was popular with many in the Republican Party, and The Tribune was probably the most important Republican paper in the nation. There was no point in feuding with the notoriously acerbic Greeley, even as Lincoln made clear he did not accept Greeley’s spin on the development of the war.

Lincoln began by saying that he would not address “any statements, or assumptions of fact, which I may know to be erroneous.” He declined to debate “any inferences which I may believe to be falsely drawn” or respond to Greeley’s “impatient and dictatorial tone.” He did this, he said, out of “deference to an old friend whose heart I have always supposed to be right.”

He then used his letter to set out his policy on the war and emancipation:

Lincoln added that “I have here stated my purpose according to my view of official duty; and I intend no modification of my oft-expressed personal wish that all men every where could be free.”

Critics of Lincoln have often said that this letter shows Lincoln was not particularly interested in ending slavery, and that he did not care about the fate of African-Americans. But a careful analysis of the letter, and its timing, suggests otherwise.

First, by this time a substantial number of slaves had gained their freedom by running to the United States Army. Thus, Lincoln’s claim that he would save the Union “without freeing any slave” was mere rhetoric, designed to placate Northern conservatives and residents of the four loyal slave states. Lincoln had also just signed the Second Confiscation Act, which set out a process — although a fairly cumbersome one — to emancipate slaves of some rebellious masters. 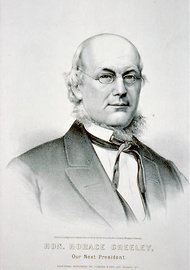 More importantly, neither Greeley nor anyone else outside the president’s cabinet and inner circle knew that more than a month before he wrote this letter, Lincoln had drafted the Emancipation Proclamation. He was simply waiting for the right moment – a major United States victory in the East – to announce his plan to end slavery in the Confederacy. Thus, his claim that he would save the Union without freeing any slaves was shrewdly political. Lincoln was in fact planning to free more than three million slaves in the 11 states that had seceded from the Union.

Lincoln was on the mark, however, by noting that he might have to free some of the slaves, and leave the others in bondage. The Constitution left him no choice. Under the Constitution of 1787 neither Congress nor the president had any power to liberate slaves in the loyal border states. But Lincoln could use his power as commander in chief to strike at slavery in those Southern states that claimed to be out of the Union and were making war on the United States.

Finally, Lincoln made clear to friends and critics alike that he was no friend of slavery by reaffirming his “oft-expressedpersonal wish that all men every where could be free.” The message was unmistakable. Lincoln was personally opposed to slavery and he always had been. He was dismantling it as best he could, given the constraints of the Constitution and the necessity of winning the war. In the next month he would elaborate on this position by issuing the preliminary emancipation proclamation. But, in his letter to Greeley he careful did not reveal that he in fact intended to turn the war for the Union into a war against slavery.

The letter was, in effect, a presidential address hidden within a response to an attack, an address that the president could not have made directly, for political reasons. Lincoln made clear that emancipation would be his policy and not that of the Army or Congress, and he made clear to Northern conservatives – the “fossil politicians” Greeley complained about – that emancipation was coming. Northern conservatives were now on notice that slavery might be destroyed to “save the Union.”

Emancipation would indeed be a legitimate result of the necessity of saving the Union. That would happen on Sept. 22, 1862, exactly one month and one day after his letter to The Tribune had helped lay the ground work for northern acceptance of emancipation. Despite the rude and obnoxious tone of Greeley’s open letter, Lincoln was probably quite happy to have a chance to let the nation know that emancipation was coming — and that it would help save the Union.

A Racial History of Drowning