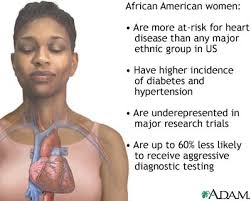 ScienceDaily (Dec. 10, 2008) — Living in a household with several generations of relatives triples a woman’s risk of serious heart disease, suggests research published ahead of print in the journal Heart.

The researchers assessed the long term impact on health of domestic living arrangements among almost 91,000 Japanese men and women aged between 40 and 69.

None of the study participants had been diagnosed with any serious illness, such as cancer, heart disease, or stroke at the start of the study in 1990-4.

They were quizzed about their personal and family medical histories, perceived stress, occupation, personality, and lifestyle factors, such as diet and exercise.

They were also asked about their domestic living arrangements and the family structure of their households.

During the monitoring period, which ended in 2004, 671 people were newly diagnosed with coronary artery disease, 339 died of coronary heart disease, and 6255 died from other causes.

But they were no more likely to die of their disease than their peers who lived with just a partner, suggesting that while living arrangements may boost the risk of diagnosis, it does not affect prognosis, say the authors.

But it wasn’t just women living with parents and children who were at increased risk of serious heart problems.

Women who lived with a partner and children were also twice as likely to be diagnosed with coronary heart disease as those who lived in households without children.

The presence of other close relatives, especially parents, seems to deter women from unhealthy behaviours, such as heavy drinking and smoking, which could boost their susceptibility to heart disease, the authors point out. But the stress of fulfilling multiple roles as daughter/daughter in law, mother and partner probably has a deleterious effect on heart health, they suggest.

Over the long term, this is likely to boost levels of stress hormones and inflammatory proteins, which in turn may strengthen the effects of other risk factors, such as high blood pressure, or diabetes, they conclude.