CITY SPORTS February 1, 2013, 10:50 am
By JAMES BARRON
In 1996, the National Basketball Association published an encyclopedic history — 800 pages about the players and the teams. Claude Johnson, who was the league’s director of international licensing at the time, leafed through it and found only two and a half pages devoted to the all-black teams that had predated the N.B.A.
Only two teams were mentioned. There must have been others, he thought.
He has spent the past 16 years filling in the gaps, starting with amateur basketball clubs organized in the early years of the 20th century. They were followed in the 1920s by a few professional teams — some with black owners, some with white owners, including one run by, among others, the grandfather of the wrestling promoter Vince McMahon. 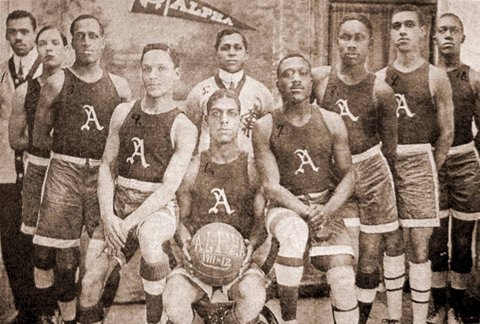 
Last year Mr. Johnson published a book of his own: 62 pages of text, 51 footnotes and more than 30 photographs. The book, “Black Fives: The Alpha Physical Culture Club’s Pioneering African American Basketball Team, 1904-1923,” focuses on a club team that figured in one of the photographs he assembled in 2007 for a book of postcards of early black basketball teams.
Soon many of those photographs, enlarged to poster size, will have a place in Barclays Center, the home of the Brooklyn Nets. They will be unveiled on Feb. 4, and a ceremony will honor descendants of Black Fives players during halftime at the Nets-San Antonio Spurs game on Feb. 10.
Mr. Johnson is counting on the photographs to dispel the notion that the Nets are the first important basketball team to call Brooklyn home.
That distinction, he said, belongs to a team called the Smart Set Athletic Club, one of the dozens of all-black teams that once flourished in the Northeast and Midwest. In the Smart Set’s first lineup was a player named Edwin F. Horne Jr. — Teddy Horne, the father of the singer Lena Horne.
Like the Negro League stars in baseball, the Black Fives were talented players who helped to shape the game before the integration of the N.B.A. in 1950. The best-known black teams were the Harlem Rens, named for the Renaissance Ballroom in Harlem, and the Harlem Globetrotters. The Rens, which Mr. Johnson describes as the first black-owned, all-black professional basketball team in history, won 88 straight games in 1933.
But they were following a path set by the earlier club teams that Mr. Johnson is determined to lift out of obscurity, among them the Smart Set in Brooklyn and the Alpha Physical Culture Club in Harlem.
“For years, I was that guy saying, ‘I’m going to write a book,’” he said. “There’s a difference between saying ‘I’m going to write a book’ and writing a book.”
He self-published it, even learning a complicated graphic design program to do the layout, page by page, and hired a copy editor to go over the manuscript. “I’m still figuring out how to write,” he said. “I got straight Ds in English.” (That was in Cincinnati, said Mr. Johnson, 51. “People get Ds for different reasons,” he said. “As soon as I hit ninth grade, different school, different environment, I straightened up and got As and Bs. I had been lost in this giant combination junior high-high school which had 3,000 kids. I was just lost.”)
Amassing the material took the detective work of a historian — sorting through tidbits of information, reading and cross-referencing articles from old newspapers, interviewing descendants of players. It started with a book by Arthur Ashe that he read while he was at the N.B.A., “A Hard Road to Glory: A History of the African-American Athlete, 1919-1945.”
“On what’s got to be the first page,” he said, “he mentions several teams. One was the Smart Set Athletic Club. I’m a licensing guy, I’m living in Brooklyn, I’m thinking, ‘The juxtaposition of smart and athletic, that would be cool on a T-shirt.’ I called up my brother, who’s a designer, and he said, ‘Yeah, that’s really cool.’”
But he found nothing on the Smart Set in the league’s archives, at the Basketball Hall of Fame or at the Library of Congress. “Eventually, I found myself in the Schomburg basement,” ,” he said, referring to the Schomburg Center for Research in Black Culture on Malcolm X Boulevard in Harlem.

He built on the information he found in the black newspapers stored there on microfilm. “You know how you can be a stalker of a person who lived back then?” he asked. “I was looking at all the possible records. Census records. The city directory. The World War I records. If you look at The New York Age and it said, ‘J. Kingsland played a good game,’ well, who was J. Kingsland?”
James Kingsland, it turned out. Through his research, Mr. Johnson determined that he joined the Smart Set in 1908-09.
“The pre-1910 teams were strictly amateur, club spirit teams,” he said. “In the mid-1910s, things started to become semipro, and by the time it got to Bob Douglas” — who, in 1923, formed the Rens — “he realized the only way to do this was to have a fully professional contract. All the other teams fell by the wayside except the Rens, and they became so successful, no one could beat them.”