Long-time civil rights leader Lawrence Guyot died at the age of 73 after dedicating his entire life fighting to empower the powerless and leaving behind a legacy that encouraged an entire generation to stand up for the cause.
According to his daughter, Guyot died in his home sometime late Thursday or early Friday. She said that he was suffering from a long history of heart disease and diabetes.
Described by his friends as ‘fearless,’ Guyot was a force behind the civil rights movement and worked tirelessly to improve race relations in the country. As an activist, he endured much hardship, including beatings in his home state of Mississippi. 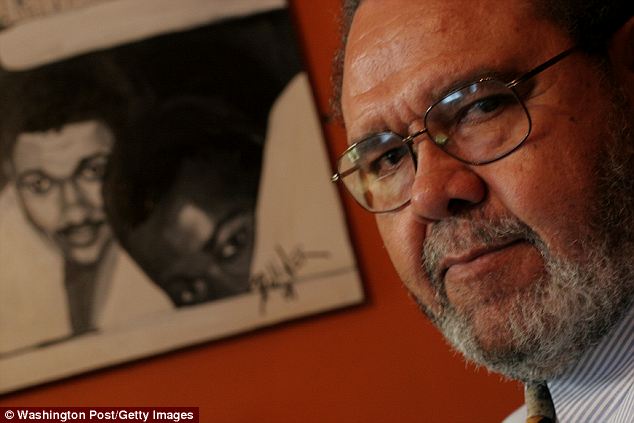 Remembered: Lawrence Guyot died at the age of 73 after dedicated his life to the civil rights movement.

Early in his career, Guyot was once arrested by law enforcement and brutally beaten. Guyot remembered how his jailers often left him bloodied with deep gashes across his head and face.
He later told the Washington Post that he was once taken from his cell and brought before a group of white men who had gathered outside. The jailer then proceeded to tell them, ‘Now you know what he looks like. You can take care of him whenever you find him.’
Guyot was later released, and while the scars from his wounds lasted with him forever, they didn’t deter him in working toward his goal.
In 1964, Guyot worked for the Student Nonviolent Coordinating Committee and served as director of the Freedom Summer Project, which sought to register blacks to vote despite a history of violence and intimidation by authorities.
He also led demonstrations with the Mississippi Freedom Democratic Party at the Democratic National Convention demanding that delegations from the state include black members. And by 1968, Guyot received full credentials to the national convention with the state’s delegation.
‘He was revved up and anytime there was a big meeting, he had something to say,’ Guyot’s long-time friend Margaret Kibbee said in an interview. ‘I remember when we were organizing for the congregational challenge in 1965, he was sending out orders and letters. He was just the way he is now, sending out orders.’

Dedicated: Guyot worked tirelessly to help improve the lives of those in both his home state of Mississippi and Washington D.C. While in the nation’s capital, Guyot worked extensively to bring better care to the community’s youth.

Once in Washington, he fought to ensure that the people of Mississippi and D.C. were represented. He served as a neighborhood advisory commissioner and was an adviser to former mayor Marion Barry.
‘When he came to Washington he continued his revolutionary zeal,’ Barry said of Guyot. ‘He was always busy working for the people.’
Guyot continued working for the people as a program monitor for the D.C. Department of Human Services’ Office of Early Childhood Development until he retired in 2005.
In his final days Dr. Frank Smith, a former D.C. council member and close friend of Guyot, recalled having a several conversations with him.
He told Afro News that Guyot had come to accept his fate and that he was proud of what he was able to accomplish. He added that Guyot would want to be remembered ‘as someone who was passionate about freedom and democracy.’
‘A minister once told me that God allows people to die slowly sometimes,’ Smith said. “He and I had two very long conversations recently. He knew that his kidneys were failing and he was living on a dialysis machine. He had to be revived on at least one occasion. He was fully aware that his days were numbered. He was at peace with himself and with his God knowing he had done the best he could for as long as he could. That’s all any of us could want, to be able to say we have done everything we could.’
http://www.dailymail.co.uk/news/article-2238101/Lawrence-Guyot-dies-Long-time-civil-rights-leader-lover-humanity.html#ixzz2DHSMrA8C