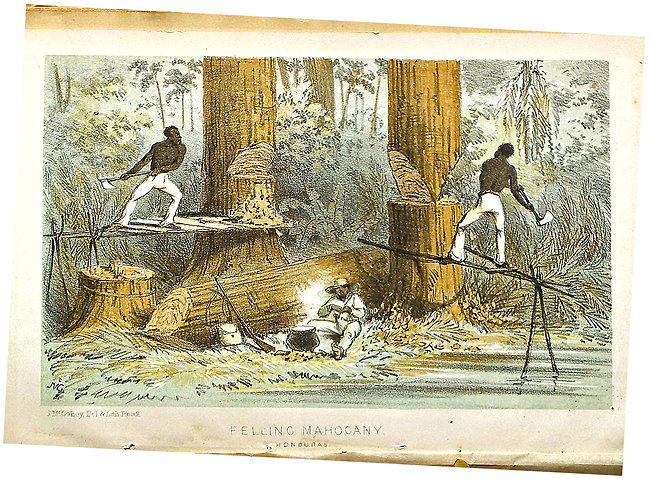 “Felling Mahogany in Honduras” depicts cutting the trees to make furniture for the wealthy, as slaves did across the Caribbean in the 18th century.

Beyond the Luster of Mahogany

Mahogany for 18th-century furniture was harvested under appalling conditions across the Caribbean. Slaves branded with owners’ monograms lived in thatched huts and scouted for trees. They had to drag and roll felled mahogany trunks to riverfronts and then float the logs, which were chained together, to ships waiting in bays full of sharks and coral reefs.

There were only a few upsides to the task. “Enslaved woodcutters had the option of wielding their machetes against a despised authority or just slipping away into the surrounding forest,” the historian Jennifer L. Anderson writes in a new book, “Mahogany: The Costs of Luxury in Early America” (Harvard University Press).

In a recent interview Ms. Anderson emphasized that she did not want readers to begin recoiling in horror from mahogany antiques, despite the material’s origins in cruelty. Her goal, she said, was to reveal the human dramas and real estate battles behind the objects.

She researched the subject at former mahogany plantations, piecing together how whites and blacks had coexisted and sometimes formed blended families. The Rhode Island-born merchant Jonathan Card ended up on an island in Belize, secretly married to Dorothy Taylor, his former housekeeper, who was black. His brother James joined him in the mahogany trade, supplying carpenters in Newport, R.I., whose work sells for millions of dollars today. 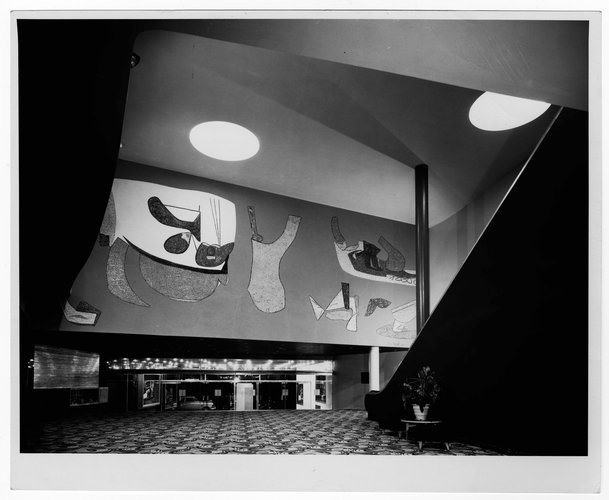 A mural by Max Spivak at the Calderone Theater in Hempstead, N.Y., designed by the architect William Lescaze.

George Washington decided to grow his own grove of this desirable crop, and had 48 seeds planted at Mount Vernon. When the saplings shriveled away, Ms. Anderson writes, “Washington did a lot of hand-wringing and blamed his horticultural losses on his slaves’ failure to water enough.”

Mahogany also became a popular target for looters and rioters. Caribbean slaves stole mahogany chests and chairs when they escaped from plantations. In 1830s Philadelphia, fine woodwork and furniture became status symbols for free African-Americans. Writing about white mobs attacking their homes, a newspaper reporter described a sorry pile of “bedsteads and mahogany banisters, cut up into small particles, as for kindling wood.”

White abolitionists gradually lost their taste for mahogany. Dickens wrote that the varnished wood reflected “in the depth of its grain, through all its polish, the hue of the wretched slaves.”

Ms. Anderson says she still finds herself aesthetically drawn to mahogany. She can remember longing to touch a museum piece that “looked like the pelt of a wild lion, golden and shimmering,” she said. She owns a mahogany tea table, probably made from trees felled in Belize.

“It’s nothing special,” she said. “It’s just a little repro.”

She visits a favorite tree at the New York Botanical Garden. “A very skinny little mahogany grows in a greenhouse there,” she said.

Caroline Rob Zaleski hates traffic jams, especially on Long Island. When stuck on highways there, Ms. Zaleski, an architectural historian based in Manhattan, has been known to take the next exit and pull into the nearest public library.

On some of those detours she has dug up tidbits about nearby buildings for her new book, “Long Island Modernism 1930-1980” (W. W. Norton & Company). Previous regional studies have focused on beach house architects like Norman Jaffe and Andrew Geller, but Ms. Zaleski set out to cover mostly midisland properties by internationally known figures.

During a recent interview at a cafe in Manhattan, she leafed through her book’s vintage images of works by Richard Neutra, Philip Johnson, Marcel Breuer, Mies van der Rohe and Frank Lloyd Wright. She affectionately smoothed the pages while summarizing the buildings’ current status with phrases like “totally gone” and “drastically altered.”

Ms. Zaleski, the director of the Modern Long Island Survey for the Society for the Preservation of Long Island Antiquities, documented 500 structures. Most had been destroyed or changed beyond recognition. The survivors, which once overlooked meadows and weeping willows, are now wedged between McMansions and strip malls.

“It’s a completely lost world,” she said. Her text, she added, is meant as “a series of surprises and scoops.”

Among the houses’ sympathetic past and current stewards are boldface names like Ralph Lauren and his wife, Ricky; Sean Hannity; and Billy Joel. The real estate magnate Aby Rosen recently bought Edward Durell Stone’s 1939 masterpiece in Old Westbury, which originally belonged to the timber magnate A. Conger Goodyear.

Most of the inhabitants Ms. Zaleski interviewed did not want their names published. She wangled visits through preservation society connections and sometimes lawyers. She does not recommend using her book as a travel guide, since so little would be visible through driveway gates and hedges.

“To see most of these houses without an invitation, you would have to trespass,” she said. She added in an e-mail that tourists on boats might be able to make out some coastal architecture, but “even so, no one wants prying visitors from the water’s edge.”

The book describes a few buildings that are somewhat accessible to the public, but without much midcentury modernism left to enjoy. Roosevelt Field mall in East Garden City has mere ghosts of the architect I. M. Pei’s cantilevers and the store signs and telephone booth graphics by the artist Sol LeWitt and the designer Don Page.

Ms. Zaleski did find the mosaic artist Max Spivak’s murals of abstract horn shapes intact at William Lescaze’s Calderone Theater in Hempstead, which is now used as a church.

“I’m almost a little worried about the word getting out,” she said as she ran her palm over that page, concerned that the publicity might encourage someone to remove them. She flipped to Lescaze’s Dune Deck Hotel in Westhampton, where Charles Addams had covered a bar wall with a scene of his famous lugubrious characters trying to relax at the beach. (A subsequent owner donated the painting to Penn State, where it hangs in the Pattee-Paterno Library complex.)

In the past few months a Long Beach synagogue designed by Percival Goodman was razed. Albert Frey and A. Lawrence Kocher’s prefab Aluminaire House in Central Islip was vandalized and has been dismantled and put into storage.

Yet Ms. Zaleski is still hopeful for the remaining buildings, she said. If local landmarks commissions could not impose regulations, at least owners moving out could protect the architecture.

They could add covenants to sales agreements, restricting alterations, she said, “if they just can be patient and wait for the right buyer to come along.”