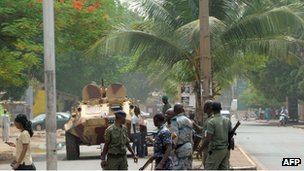 The army continues to wield huge influence behind the scenes

Mali must halt its slide into human rights chaos and open investigations into dozens of cases of enforced disappearances, extra-judicial killings and torture documented by Amnesty International.

In a report released today (Tuesday)  following a ten-day mission to Mali in July 2012, Amnesty International details brutal abuses committed by soldiers loyal to the military Junta against soldiers and police officers involved in an attempted counter-coup on 30 April 2012.
In the days that followed the attempted counter-coup dozens of soldiers were arrested and taken to Kati military camp, 20 kilometres north of the capital city of Mali, Bamako. They were held for more than 40 days in appalling conditions and subjected to torture and sexual abuse. Twenty one detainees were abducted from their cell at night and haven’t been seen since.
Amnesty International’s West Africa Researcher Gaetan Mootoo said:
“The Malian authorities have a duty to investigate all the cases we have documented. Those responsible for these brutal efforts to avenge the attempted counter-coup must be held accountable for their actions.
“These vengeful acts fly in the face of Mali’s international human rights obligations and action must be taken to ensure the military Junta doesn’t continue to operate with impunity.”
Amnesty International’s report details the enforced disappearance of at least 21 named individuals on the night of May 2nd to 3rd from the cell they were being held in.
One of the inmates of these disappeared people prisoners told Amnesty International:
“Around two in the morning, the door of our cell opened. Our wardens stood at the door and began to read a list. One by one, the soldiers called, went out. We haven’t seen our cellmates since that date.”
Amnesty International is also concerned about a number of soldiers being treated for wounds in Gabriel Touré Hospital in Bamako who were abducted by the military junta on 1 May. Despite its requests, Amnesty International has not obtained the list of these soldiers and has not been able to establish their whereabouts.
While held in Kati military camp prisoners described inhumane and degrading conditions including 80 inmates wearing just their underwear crammed into a five metre square cell. The detainees were forced to relieve themselves in a plastic bag and were deprived of food during the first days of their detention. Some detainees were regularly taken from their cell to be beaten and interrogated.
One prisoner described the following torture used to extract a confession from him:
“They asked us to confess that we had wanted to carry out a coup. They made us lie face down, they tied our hands behind our backs and then tied them to our feet. One of them forced a cloth in our mouths using a stick. We couldn’t talk let alone scream. They put out cigarettes on our bodies, one of them put out his cigarette in my ear.”
In some cases sexual abuse was carried out against prisoners in Kati. One police officer said:
“We were four, they asked us to undress completely, we were ordered to sodomize each other otherwise they would execute us… During the act, our guards shouted us to do it harder.”
In 2009 Mali ratified the International Convention prohibiting enforced disappearances*** and therefore has an obligation under international law to make known immediately the whereabouts of all those soldiers and policemen who disappeared in the crackdown following the failed counter-coup. A list of names is available in Amnesty International’s report.
“The transitional government in Mali is failing in its task to protect the human rights of its citizens and this lawlessness cannot be allowed to continue,” said Gaetan Mootoo.
“Malian judicial officials must launch an immediate investigation into these very serious events and restore stability to a country that has suffered immeasurably over the past six months.”
http://www.amnesty.org.uk/news_details.asp?NewsID=20259