By DAILY MAIL REPORTER
PUBLISHED: 13:42 EST, 29 January 2013 | UPDATED: 14:22 EST, 29 January 2013
A courtroom surveillance camera has captured the terrifying moment a man brutally assaulted his ex-girlfriend as she sought an order of protection against him.
Rashad Greene, 30, was left alone with his grandmother and 28-year-old ex-girlfriend after Magistrate Tracy Stoner briefly left the Summit County courtroom in Ohio on Friday.
They had attended the hearing after the woman applied for a restraining order against Greene, whom she said threatened and abused her, on January 16. 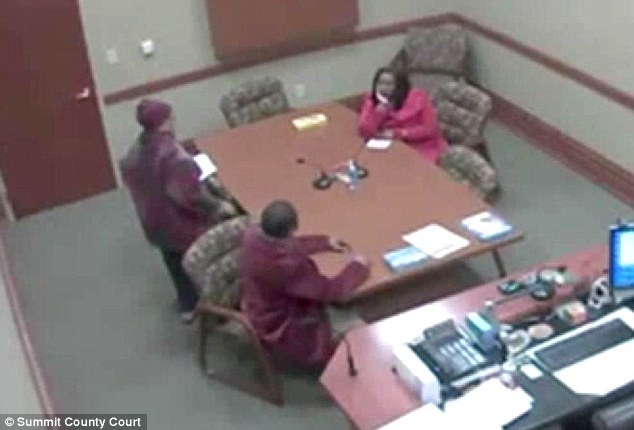 Calm before the storm: Rashad Greene talks with his ex and his grandmother after they are left alone 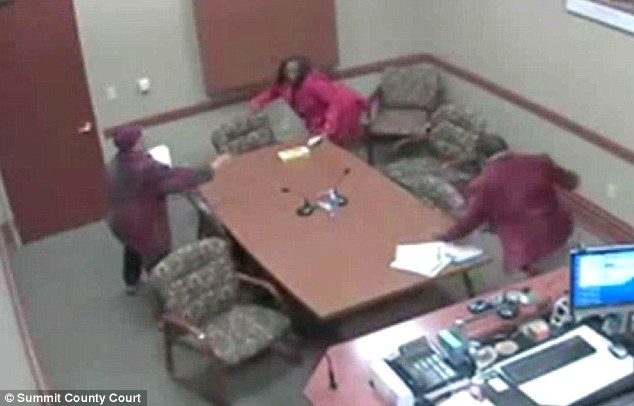 Attack: He suddenly jumps up from the chair and lunges at the woman, who tries to escape

In the footage, the magistrate leaves the room and Greene can be seen yelling and becoming increasingly agitated as his ex-girlfriend sits around the other side of the table.
He suddenly jumps to his feet and lunges towards her as she tries to run away.
When his grandmother attempts to get in between the pair, Greene just pushes her out of the way, grabs his ex-girlfriend and throws her to the floor.
As he is seen punching her, a sheriff’s deputy enters the room and subdues him with a stun gun – as the horrified magistrate watches helplessly. 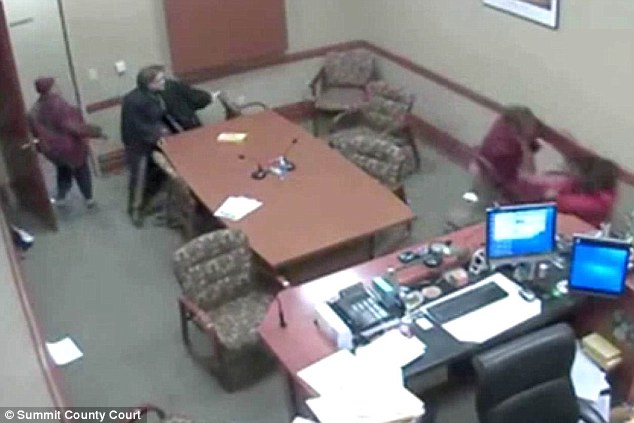 Violent: He catches her and pushes her to the ground as the magistrate returns to the room

Stopped: A sheriff’s deputy uses a stun gun to subdue Greene as he beats the woman

The officer places handcuffs on Greene as the beaten woman stumbles to her feet. She needed medical attention for a head injury but was released from hospital. 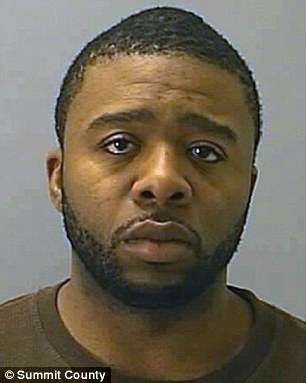 Arrest: Greene was arrested for domestic violence and booked into the county jail

Greene was arrested for domestic violence and booked into the county jail, where he is being held in lieu of $25,000 bond.

An Akron Municipal Court judge also signed a temporary protection order barring Greene from having contact with his ex-girlfriend.

The victim has now been left wondering why she was left alone with a man she was seeking protection against, the Akron-Beacon Journal reported.
‘I went there, I told [the magistrate] I was in fear for my life and that I had children to take care of,’ she told the paper. ‘Once the judge walked out, I was in fear.

‘I thought he was about to kill me. … I was just thinking about my life and [how] I wanted to go home with my children.’
Susan Tucker, the court’s community outreach director, said that this is the first time a victim has been attacked in the courtroom.
‘The reality is, and I think most of us in the domestic violence field know, that anything can happen at any time,’ she said. ‘And even if the magistrate had been there, if he had decided to do this, he would have done it anyway.’
She added that there are two sheriff’s deputies in the courthouse and funding is not available to have any more – yet after this incident, the court is re-examining its policies and funding.

‘We are certainly going to look at what we need to do in order to keep everyone safer,’ she said.
Read more: http://www.dailymail.co.uk/news/article-2270224/Terrifying-moment-man-attacks-ex-girlfriend-inside-courtroom-seeks-order-protection.html#ixzz2JOZPSe8W

16 Year Old Girl Held Down and Raped by Classmates

In One School, Students Are Divided by Gifted Label — and Race