The real-life superman who rescued a nine-month-old boy swept onto the tracks of an oncoming subway train has reunited with the mother and child while offered a job at the JFK airport.

‘It feels amazing, just seeing him alive,’ Delroy Summonds, a father of two himself told the New York Daily News after visiting the boy named David and his mother in Brookdale Hospital in New York on Wednesday.

The child suffered a gash to his forehead but is expected to be OK. 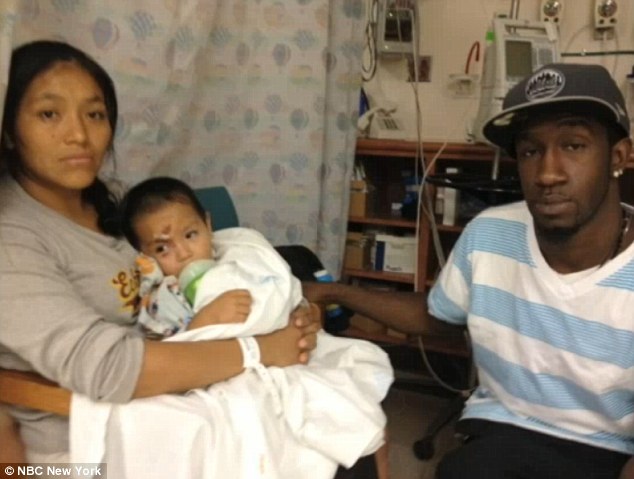 Reunion: Hero Delroy Summonds was reunited with nine-month-old David and his mother Maria Zamara on Wednesday, just after offered a job at JFK airport

Mr Simmonds says he did what he’d hope anyone would do when he reacted to the stroller crashing onto the elevated tracks while the mother froze in horror.

Mother Maria Zamara had parked the stroller on the platform in Brooklyn’s Cypress Hills but forgot to put the brakes on before she turned away to look after three other children.

A sudden gust of wind then blasted the stroller and toddler off the edge of the platform to the horror of onlookers.

An unemployed father for the past year, Mr Simmonds was on his way to a job interview at the John F Kennedy Airport when the incident happened.

Despite missing his appointment, his heroism didn’t go unrecognized and ultimately rewarded. 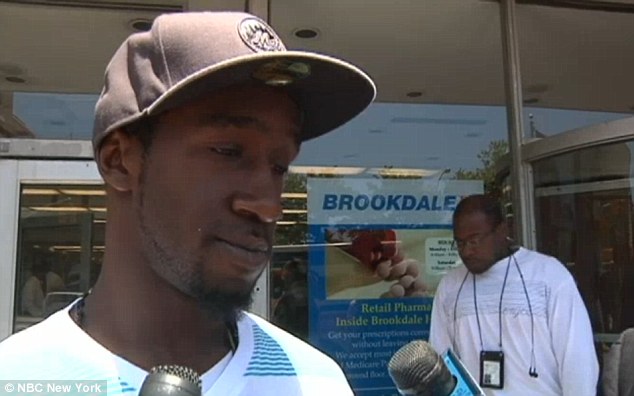 Reaction: Mr Summonds, a father of two himself, says his reaction to seeing the child fall onto the subway tracks was something he hopes anyone else would have for his kids

On Wednesday Mr Simmonds’ long struggle for work ended with his offer of a position as a maintenance worker at the airport; a reward he couldn’t be more happy about.

‘That’s the little man that got me a job today,’ he said during his reunion with the mother and child according to the Daily News.

‘I remember you,’ Mrs Zamara responded to her hero, according to the Daily News. ‘Thank you.’

Asked his responding words to the mother, Mr Simmonds said he told her thank you, in the mother’s language of Spanish, as well.

‘Thank you, Lord. Thank you, thank you,’ he later reacted to his job offer with ABM Janitorial Services. 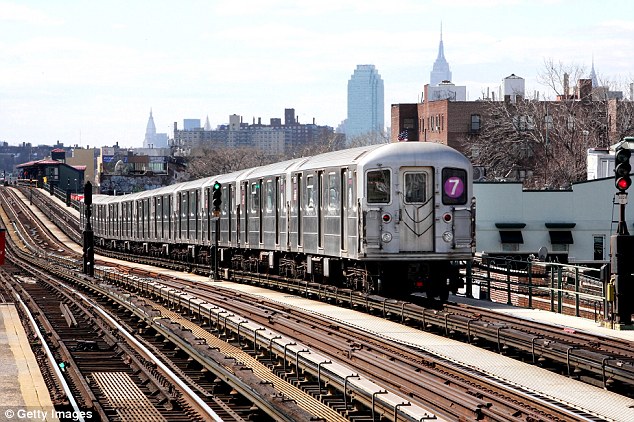 Condition: The child escaped the tracks outside Manhattan in Brooklyn with a gash to his forehead and was hospitalized but is expected to be OK

‘It says a lot about his character that he would jump on the tracks to save a little boy,’ ABM’s project manager Guy Rodriguez told the Daily News. ‘We are happy to hire Delroy. We are honoured.’

‘It feels great,’ Mr Simmonds said while trying on his new uniform.

He will be stationed in the airport’s Terminal Three and with custodial work also help with security.

Occurring just before 1pm on Tuesday, one witness recalled the horrifying scene and Mr Summonds’no fear reaction to it saying he ‘didn’t care,’ jumping before the train anyway.

Seeing the commotion ahead, the train’s operator was honking his horn before he managed to grind to a halt midday into the station, reported the Daily News.

Speaking from the hospital following, the boy’s father said he was thankful his son was all right but said: ‘We don’t know who helped us,’ leaving Mr Summonds’ heroism temporarily a mystery.