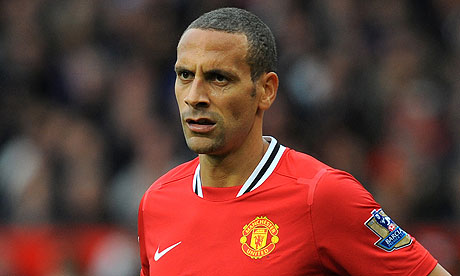 LONDON (Reuters) – Manchester United defender Rio Ferdinand has been charged over a comment on Twitter which referred to Chelsea’s Ashley Cole as a “choc ice”, the English FA said on Monday.

“The FA has today charged Manchester United’s Rio Ferdinand with improper conduct in relation to comments posted on Twitter,” the FA said on its website (www.thefa.com)

“The allegation is that the player acted in a way which was improper and/or bought the game into disrepute by making comments which included a reference to ethnic origin and/or colour and/or race.” Ferdinand, who like Cole is of mixed race, responded positively to a Twitter user who made the choc ice slur after Cole had given evidence for the defence in the trial of Chelsea team mate John Terry earlier this month.

Former England captain Terry was found not guilty in the criminal case of racially abusing Ferdinand’s younger brother Anton during a Premier League match between Chelsea and Queens Park Rangers but now faces an FA charge.

The term “choc ice” is understood by many to have racial connotations, meaning a person is black on the outside and white on the inside.

“Then again he’s always been a sell out. Shame on him.”

Ferdinand replied with: “I hear you fella! Choc ice is classic! hahahahahahha!!”

The 33-year-old deleted the post but later defended himself, saying the term was not racist and was “slang” for someone who is acting “fake”.

Publication of the slur in British media also prompted members of the public to make complaints to police, who confirmed an investigation was underway.

Ferdinand, who was left out of England’s Euro 2012 squad which included Terry and Cole, has been given until 1500 GMT on Thursday to respond to the charge.

Louise Marie Thérèse (The Black Nun of Moret): Rumored to be daughter of the Queen of France

The Jewish role in the African Slave Trade