A manual labourer has allegedly had one hand chopped off by his employers after asking bosses for his salary.

The incident happened on Sunday when the proprietors of an illegal alcohol making unit in India punished the man – identified only as Aliyaar – with an axe. 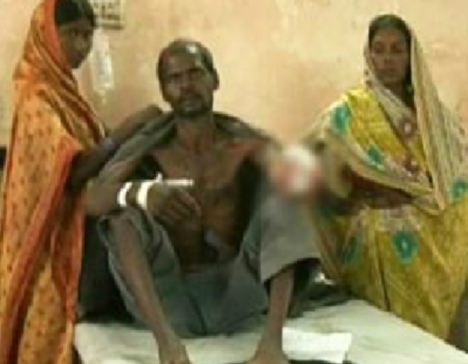 Shocking: The labourer’s hand was chopped in the Garhwa district of Jharkhand allegedly after he asked his employers for his salary

He was taken to Ranchi’s Rajendra Institute of Medical Sciences (RIMS) bleeding profusely, and may not be able to work for the rest of his life.

Police said the villager used to supply wood from the nearby forests to the brewery.

‘There has been a fight between 2-3 people. The place where this incident occurred is an alcohol manufacturing unit owned by Ram Singh Yadav and Uday Yadav,’ said Dr Mical Raj, Superintendent of Police, Garhwa.

‘Those running the brewery did not pay him. For such a meagre amount, the left hand of Aliyaar was chopped off.’

Mr Raj said they had arrested one man after the incident and were looking for others. The man’s condition is now said to be stable.

‘Ram Singh Yadav and his brother cut my hand and I became unconscious immediately. I don’t remember how many other men were present there… God alone knows how will I run my family now,’ said the man, Aliyaar.

The illegal alcohol business is run by local strongmen who empoy villagers for their work, often exploiting and physically abusing workers.

Aliyaar told the police while in hospital that when he demanded the wages he was owed, he was beaten up and his hand cut off.

The victim’s wife said: ‘He used to cut wood and earn some money for us. We are a 10-member family, how will we survive, what will we eat now?’

Chief Minister of Jharkhand, Arjun Munda, said only that the state had the lowest crime rate when he was asked about the incident.

‘As far as the law and order situation is concerned or if we see national crime bureau’s report, Jharkhand is in a very good state,’ he said.