By JON PARELES
Published: February 12, 2013
SALVADOR, Brazil — On Sunday at noon, some 15,000 people were mustered for a parade at Campo Grande, Salvador’s Central Park — part of the annual six-day carnaval here that ended on Tuesday. This parade was a show of solidarity: the first massed public performance of the city’s blocos afro, the Afro-Brazilian drum groups that are also neighborhood associations and self-help initiatives in some of the city’s poorest neighborhoods.
At the core were 450 percussionists, pounding out the marching, swinging beat of Bahian samba reggae, and Carlinhos Brown, a hitmaking Brazilian songwriter and a bloco leader who organized and financed the parade. Around them were squadrons of costumed bloco members: Baianas in white hoop skirts, African-style dancers with straw fringes at shoulders and hips, crowned kings and queens, helmeted female warriors, hunters with glittering bows and arrows, twirling and kicking capoeira martial artists.
Thousands of other bloco members strutted along in groups wearing matching abadás — carnival jerseys — representing more than a dozen other blocos afro. Only one of Salvador’s major blocos refused to join: Olodum, the group heard on Paul Simon’s song “The Obvious Child” and seen in the video for Michael Jackson’s “They Don’t Care About Us.”
The parade was a public affirmation — and media magnet — for an idea Mr. Brown has been promoting. He wants Salvador to create Afródromo, a parade ground for the blocos afro, with 20,000 bleacher seats and skyboxes. He envisions a more high-tech version of the Sambódromo, where Rio de Janeiro’s top carnaval events take place. The project is estimated by an executive producer, Raissa Martins, to cost $5 million. 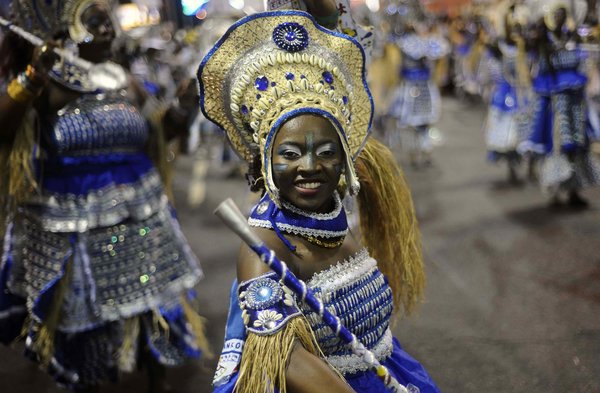 A member of an Afro-Brazilian drum group at a parade in Salvador on Sunday.

Afródromo would be a new carnaval circuit. Salvador already has two primary ones: the long-established circuit along the downtown streets of Campo Grande, and a newer and now more prestigious route along the beachfront boulevard, from Barra to Ondina beaches. Mr. Brown hopes that with an established parade ground of their own, the blocos afro could gain prime-time media attention and also work together on merchandising and other programs. Afródromo’s advocates say it would help Salvador’s carnaval reclaim its soul.
Salvador, with a welcoming Atlantic harbor, was the first capital of Brazil. From the 16th to the 19th centuries, until Brazil ended slavery in 1888, it was the largest port in the New World for the slave trade, and 80 percent of the city’s current population is Afro-Brazilian. “Bahia has been a profound cauldron for the world’s memories,” Mr. Brown said.
African-rooted rhythms propel much of Brazilian popular music. Yet the prime-time face of carnaval is almost entirely white. “It is a model that goes against cultural diversity,” said Albino Rubim, secretary of culture for the state of Bahia, who was attending the Afródromo parade. “It’s all related to business, to marketing, to sponsorship.” He added: “A carnaval without the blacks is a carnaval that loses its soul. And carnaval in Bahia today has lost a lot.”
Salvador’s main carnaval parades, which bring an estimated two million people to the streets, feature pop hitmakers rolling along above the crowd on a trio elétrico. A trio elétrico is enormous: a tractor-trailer truck reoutfitted with video screens and a blasting sound system, with bands of frenetic percussionists and peppy lead singers performing on top. Thousands of revelers surround each truck, singing along and dancing as only Brazilians dance, while the vehicle crawls along the route or stops to perform a few songs for TV. 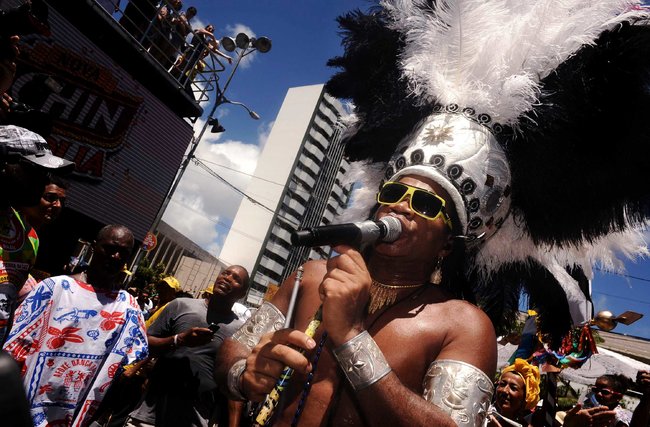 The hitmaking Brazilian songwriter Carlinhos Brown at a parade he organized and financed in Salvador on Sunday.

The gigantism of the trios elétricos has caused a backlash of scaling down. Last Wednesday, the night before carnaval, the Barra-Ondina route was taken over by the Habeas Copos parade: a procession of local brass bands and surrounding dancers, proudly unamplified. During carnaval, the four-man MicroTrio played psychedelic-tinged tropicália songs from a pickup truck hung with a few amplifiers. The truck was only big enough to hold three of them; the fourth strolled alongside, and the decibel level was modest enough to make the music inviting instead of overwhelming.
The big trios elétricos are proudly and blatantly commercial. Each arrives amid giant balloons announcing sponsors’ names, and the trucks’ video screens often flash commercial logos while the bands perform. More television exposure draws more sponsorships, which can sustain careers.
“The difference, maybe, between here and New Orleans or Trinidad is that here the pop music universe invaded carnaval,” said Gilberto Gil, the Bahian songwriter who went on to become Brazil’s minister of culture. “There is no distinction any more between carnaval music and music the rest of the year.”
Meanwhile, the blocos afro developed a tradition of performing late at night, when network coverage dwindles, and potential viewers are asleep. Although the Afródromo parade and some blocos — including Olodum, Muzenza and Didá — did play the main carnaval showcases, they were rare.
Ilê-Aiyê — the pioneering bloco afro founded in 1974 — was accompanied by a dawn chorus of birds when it performed a booming affirmation of African culture and black pride in the wee hours of Sunday morning at Campo Grande. (Its members would join the Afródromo parade just hours later.) Less exposure means less money for the blocos’ offstage efforts. Many run programs to help keep teenagers out of trouble. The forceful female bloco afro Didá also runs initiatives to prevent domestic violence.
Olodum, founded in 1979, is probably Salvador’s best-known bloco afro, running a school that’s trained countless musicians. Marcelo Gentil, Olodum’s vice president, agreed with Mr. Brown that “we want Afro blocos to have visibility, and sponsorships from big Brazilian companies.” But a third, separate circuit “won’t get the media coverage they think they’re going to get.”
He said a better course would be to get more blocos afro onto the Barra-Ondina circuit. An Afródromo specializing in the percussion-and-voice songs of the blocos afro “would be like the World Cup, which is just for soccer,” he said. “But the circuit we’re fighting for is like the Olympics, with all kinds of Brazilian music, and more diverse forms of expression.”
Jaques Wagner, the governor of Bahia, said: “The traditional circuit is already overloaded. But we have to be very, very careful not to make things look like apartheid.”
One historical role of carnavals worldwide has been to upend class roles humorously; the poor mask as royalty, the elite as clowns. But carnaval in Salvador is increasingly commodified, starkly announcing income inequality.
Trios elétricos used to roll along, drawing random crowds. Now many of the trucks arrive within a rope perimeter that can be hundreds of feet long. Fans pay handsomely to dance along within the rope, their access guaranteed by a uniform T-shirt, while the less privileged crowd the narrow remaining space on street and sidewalk. “It’s becoming an ideological question, the social against the private, the corporate against the noncorporate,” Mr. Gil said. Big stars who parade on multiple days often make a point of doing at least one parade “sem cordas” — without ropes.
The parade routes, particularly the beachfront circuit, Barra-Ondina, are also flanked by camarotes, or grandstands, that have paid admission or elite guest lists. Above the hurly-burly of the street, the camarotes provide a balcony view that’s level with the performers on the trios elétricos — close enough to make eye contact. The terms upper and lower classes can become literal.
Mr. Brown’s band was on a trio elétrico during the Afródomo parade. But he sang from the street. “Culture isn’t sent down from Olympus,” he said.