By Benjamin Bel
Apr 14, 2013 11:36am
Florida Sen. Marco Rubio this morning slammed Jay-Z over his recent trip to Cuba, saying on “This Week” that the rapper needed to “get informed” and that he missed an opportunity to meet the politically oppressed people that live on the island nation south of Florida.
“I think Jay-Z needs to get informed.  One of his heroes is Che Guevara.  Che Guevara was a racist.  Che Guevara was a racist that wrote extensively about the superiority of white Europeans over people of African descent, so he should inform himself on the guy that he’s propping up,” Rubio said during an interview with ABC News’ Chief White House Correspondent Jonathan Karl.
“Secondly, I think if Jay-Z was truly interested in the true state of affairs in Cuba, he would have met people that are being oppressed, including a hip-hop artist in Cuba who is right now being oppressed and persecuted and is undergoing a hunger strike because of his political lyrics,” Rubio added. “And I think he missed an opportunity.  But that’s Jay-Z’s issue.” 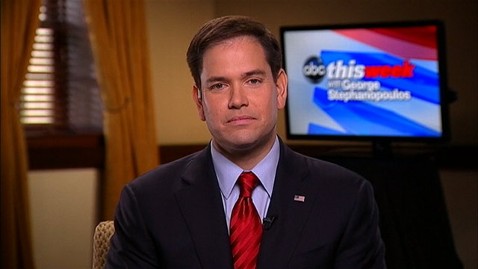 After returning from Cuba last week, Jay-Z produced a new rap entitled “Open Letter,” in which he criticized politicians for questioning his trip with his wife Beyoncé to the communist nation. The trip was authorized by the Treasury Department under a licensed program that encourages “meaningful contacts” with the Cuban people.
Rubio, who is of Cuban descent, criticized current U.S. travel policy to the island, which he said was being running by a “tyrannical regime.”
“The bigger point is the travel policies.  The travel policies need to be tightened because they are being abused,” Rubio said. “These are tourist trips, and they are – what they’re doing is providing hard currency and funding so that a tyrannical regime can maintain its grip on the island of Cuba, and I think that’s wrong.”