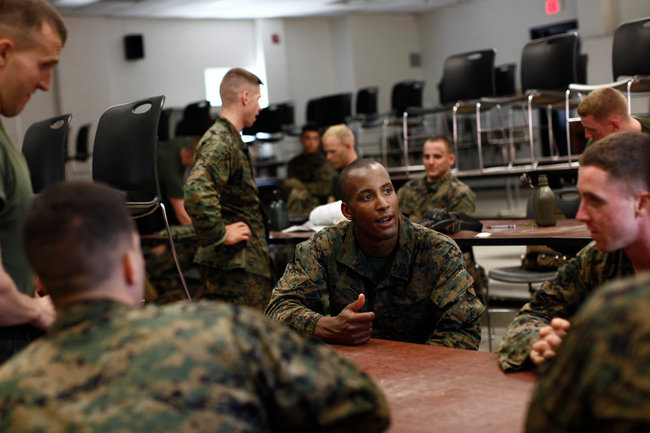 The United States Marine Corps, long dominated by white men, is starting a marketing campaign to attract more minorities and women into its officer corps.

The effort kicks off on Thursday with television commercials during professional and college football games, glossy advertisements in sports magazines and a series of Internet videos. Titled “Fighting With Purpose,” it features a black lieutenant and a female captain who are actively engaged in their home communities as well as in leading Marines.

The goal, senior officers say, is to show potential recruits that the corps, while fond of calling itself America’s 911 force, is not just about fighting — a message they hope will resonate with young people in general, but women and blacks in particular.

“What distinguishes certain groups, particularly African-Americans, is that they are closely associated with their communities at home,” said Maj. Gen. Joseph L. Osterman, who is in charge of the Marine Corps recruiting command.

In large part because it is dominated by the male-only infantry, the Marine Corps has fewer women in its ranks, about 7 percent, than the rest of the military, where about 15 percent of the troops are women.

It also lags other services in black officers, who account for about 6 percent of its officer corps, compared with more than 13 percent in the Army and about 10 percent for all the services combined. But the Marine Corps does have the highest percentage of Hispanics in its officer corps, according to the Pentagon.

General Osterman said one goal of diversifying the ranks was to provide role models for younger enlisted female and minority Marines. But another is to increase the number of Marines who can speak foreign languages or are familiar with other cultures — skills that could be crucial for possible counterinsurgency operations in Africa, Asia and Latin America.

In one of the new 30-second television commercials, First Lt. Drexel King strides purposefully in his dress uniform past a high school graduation before morphing into his combat uniform and assisting with an emergency aid mission overseas.

“It’s always been a part of me to fight for those who couldn’t fight for themselves,” he says.

In a two-minute Internet video, Capt. Monica Meese describes how she leads cross-fit training in a gym in Arizona. “She’s a motivator,” the gym owner says. “You can see the Marine Corps training.”

The new campaign is an extension of the Marine Corps’ “Toward the Sound of Chaos” campaign, which used social media, television commercials and print ads to appeal to young adults, who, according to a survey conducted for the corps, believe that helping people in need is a vital component of citizenship.

The Marine Corps has long been admired, and sometimes derided, for its assertive and holistic approach to marketing itself. This campaign is no exception. In the past year, for instance, the corps has honored the history of the Montford Point Marines, an all-black unit named after the segregated boot camp where they trained in the 1940s.

The corps was also quick to publicize its part in helping with relief efforts afterHurricane Sandy. Several hundred Marines from Camp Lejeune, N.C., were sent to New York just days after the storm with electrical generators and water pumping and purification equipment.

In keeping with a directive from Secretary of Defense Leon E. Panetta, the Marine Corps has also been studying ways to bring more women into combat units, as well as into its infantry officer corps. In September, the first two women to attempt the Marine Corps’ infantry officer course dropped out without finishing. More female volunteers are expected to try the rigorous course in the coming months.

The Marine Corps has also increased its efforts to award Naval Reserve Officer Training Corps scholarships to students attending historically black colleges and universities. This year, for the first time, the corps awarded a full complement of 34 of the four-year scholarships.

“It is all tied together,” General Osterman said. “We don’t do these things as singular events.”