Mary Seacole was born in Kingston, Jamaica in 1805. Her father was a Scottish army officer and her mother a free black woman who ran a boarding house in Kingston. Mary’s mother also treated people who become ill. She was a great believer in the herbal medicines. These medicines were based on the knowledge of slaves brought from Africa. This knowledge was passed on to Mary and later she also become a ‘doctress’.
In 1850 Kingston was hit by a cholera epidemic. Mary Seacole, using herbal medicines, played an important role in dealing with this disease. She also dealt successfully with a yellow fever outbreak in Jamaica. Her fame as a medical practitioner grew and she was soon carrying out operations on people suffering from knife and gunshot wounds.
Mary loved travelling and as a young woman visited the Bahamas, Haiti and Cuba. In these countries she collected details of how people used local plants and herbs to treat the sick. On one trip to Panama she helped treat people during another cholera epidemic. Mary carried out an autopsy on one victim and was therefore able to learn even more about the way the disease attacked the body.
In 1853 Russia invaded Turkey. Britain and France, concerned about the growing power of Russia, went to Turkey’s aid. This conflict became known as the Crimean War.
Soon after British soldiers arrived in Turkey, they began going down with cholera and malaria. Within a few weeks an estimated 8,000 men were suffering from these two diseases. At the time, disease was a far greater threat to soldiers than was the enemy. In the Crimean War, of the 21,000 soldiers who died, only 3,000 died from injuries received in battle. 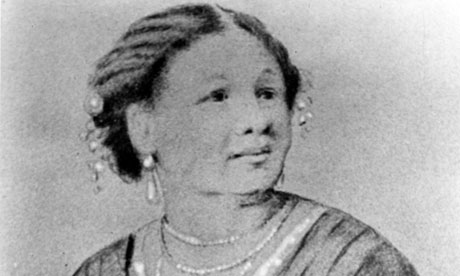 
When Mary Seacole heard about the cholera epidemic she travelled to London to offer her services to the British Army. There was considerable prejudice against women’s involvement in medicine and her offer was rejected. When The Times publicised the fact that a large number of British soldiers were dying of cholera there was a public outcry, and the government was forced to change its mind. Florence Nightingale, who had little practical experience of cholera, was chosen to take a team of thirty-nine nurses to treat the sick soldiers.
Although Mary Seacole was an expert at dealing with cholera, her application to join Florence Nightingale’s team was rejected. Mary, who had become a successful business woman in Jamaica, decided to travel to the Crimea at her own expense. She visited Florence Nightingale at her hospital at Scutari but once again Mary’s offer of help was refused.
Unwilling to accept defeat, Mary started up a business called the British Hotel, a few miles from the battlefront. Here she sold food and drink to the British soldiers. With the money she earned from her business Mary was able to finance the medical treatment she gave to the soldiers.
Whereas Florence Nightingale and her nurses were based in a hospital several miles from the front, Mary Seacole treated her patients on the battlefield. On several occasions she was found treating wounded soldiers from both sides while the battle was still going on.
After the war ended in 1856 Mary Seacole returned to England. She hoped to work as a nurse in India but she was unable to raise the necessary funds. Mary Seacole died in London on May 14,1881.
(S1) Mary Seacole, Wonderful Adventures of Mrs Seacole (1857)
Simple remedies which are available for the terrible diseases by which foreigners are attacked (can be) found growing under the same circumstances which produce the ills they minister to. So true is it, that beside the nettle ever grows the cure for the sting.
(S2) Mary Seacole wrote about the rejection of her offer of help during the Crimean War in her autobiography, Wonderful Adventures of Mrs. Seacole (1857).
In my country, where people know our use, it would have been different; but here (England) it was natural enough that they should laugh, good-naturedly enough, at my offer… Once again I tried, and had an interview this time with one of Miss Nightingale’s companions. She gave me the same reply, and I read in her face the fact, that had there been a vacancy, I should not have been chosen to fill it… Was it possible that American prejudices against colour had some root here? Did these ladies shrink from accepting my aid because my blood flowed beneath a somewhat duskier skin than theirs?
(S3) The Morning Advertiser (19 January, 1855)
She (Mary Seacole) is often seen riding out to the front with baskets of medicines of her own preparation, and this is particularly the case after an engagement with the enemy.
(S4) Wonderful Adventures of Mrs Seacole (1857)
I was generally up and busy by daybreak, sometimes earlier, for in the summer my bed had no attractions strong enough to bind me to it after four. There was plenty to do before the work of the day began. There was the poultry to pluck and prepare for cooking, which had been killed on the previous night; the joints to be cut up and got ready for the same purpose; the medicines to be mixed; the store to be swept and cleaned.

By 7 o’clock the morning coffee would be ready. From that time until 9 o’clock, officers on duty in the neighbourhood or passing by would look in for breakfast. About half past nine my sick patients began to show themselves. In the following hour they came thickly and sometimes it was past twelve before I had got through this duty. They came with every variety of suffering and disease; the cases I most disliked were the frostbitten fingers and feet in winter.
(S5) Letter written by Sir John Hall, Inspector-General of Hospitals (30 June, 1856)
She (Mary Seacole) not only, from the knowledge she had acquired in the West Indies, was enabled to administer appropriate remedies for their ailments, but, what was of as much importance, she charitably furnished them with proper nourishment, which they had no means of obtaining except in hospital, and most of that class had an objection to go into hospital.
(S6) William H. Russell, The Times (27th September, 1855)
In the hour of their illness, these men have found a kind and successful physician, a Mrs Seacole. She is from Kingston (Jamaica) and she doctors and cures all manner of men with extraordinary success. She is always in attendance near the battlefield to aid the wounded, and has earned many a poor fellow’s blessing.
(S7) Dr. Reid, a surgeon in the British Army serving in the Crimea, wrote this letter to his family in 1855.
Here I met a celebrated person. A coloured woman, Mrs Seacole. Out of the goodness of her heart and at her own expense she supplied hot tea to the poor sufferers while they waited to be lifted into the boats (that took them to the hospital).
She did not spare herself if she could do any good to the suffering soldiers. In rain and snow, day after day, she was at her post. With her stove and kettle, in any shelter she could find, she brewed tea for all who wanted it – and there were many.

(S8) An extract from a poem published about Mary Seacole in Punch Magazine (6th December, 1856)
She gave her aid to all in need
To hungry, sick and cold
Open hand and heart, ready to give
Kind words, and acts, and gold
And now the good soul is “in a hole”
What soldier in all -the land
To set her on her feet again
Won’t give a helping hand?
(S9) Ziggy Alexander and Audrey Dewje, article about Mary Seacole (1984)
In March 1856, the war ended suddenly. Mrs Seacole returned to England without any money. She tried to set up her business again selling her wares to soldiers. By November her business had failed and she was in the London Bankruptcy Court. The Times newspaper published letters from people who wanted to set up a fund to repay her for the money she had spent in the Crimea.
In 1867 another committee was set up to help her. This time Queen Victoria supported it. She thanked Mary Seacole for her work in the Crimea.
(S10) Mary Seacole, Wonderful Adventures of Mrs Seacole (1857)
A poor, little, brown-faced orphan infant, scarce a year old, was dying (of cholera) in my arms, and I was powerless to save it… towards morning the wee spirit left this sinful world for the home above… how the idea first arose in my mind I can hardly say – that, if it were possible to take this little child and examine it, I should learn more of the terrible disease which was sparing neither young nor old, and should know better how to do battle with it… I followed the man who had taken the dead child away to bury it, and bribed him to carry it by an unfrequented path… I need not linger on this scene, nor give the readers the results of my operation… But the knowledge I had obtained thus strangely was very valuable to me, and was soon put into practice.
(S11) Lady Alicia Blackwood, A Narrative of Personal Experiences and Impressions during a Residence on the Bosphorous throughout the Crimean War (1881)
She (Mary Seacole) had, during the time of battle, and in the time of fearful distress, personally spared no pains and no exertion to visit the field of woe, and minister with her own hands such things as she could comfort, or alleviate the sufferings of those around her; freely giving to such as could not pay, and to many whose eyes were closing in death, from whom payment could never be expected.
(S12) Report in The Times newspaper on the Royal Guards Regimental Dinner (26 August, 1856)
Among the visitors was Mrs Seacole, whose appearance awakened the most rapturous enthusiasm. The soldiers not only cheered her, but chaired her around the gardens, and she might have suffered from the oppressive attentions of her admirers, were it not that two sergeants of extraordinary stature gallantly undertook to protect her from the pressure of the crowd. However, the excellent lady did not appear in the least alarmed, but, on the contrary, smiled most graciously and seemed highly gratified.